$100,000,000 Sold! – Another Monumental Milestone in a Record-Setting Year for the Stack’s Bowers Galleries World and Ancient Coin Department

The Stack’s Bowers Galleries World and Ancient Coins department is delighted to announce that their sales for 2021 have exceeded $100,000,000, far surpassing the total for any previous year. 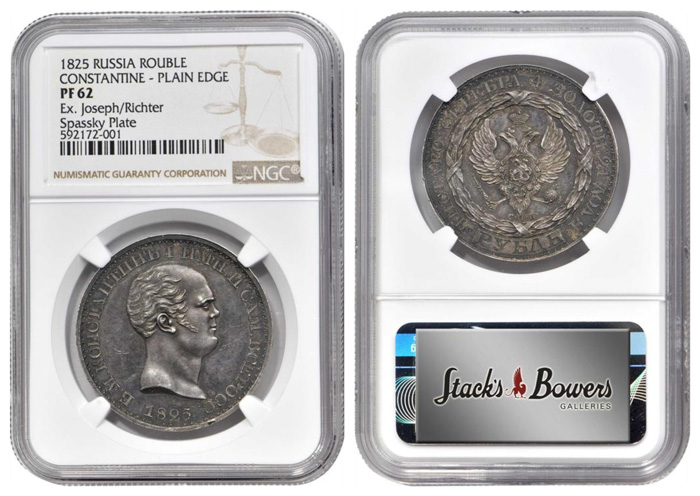 Costa Mesa, CA – The Stack’s Bowers Galleries World and Ancient Coins department is delighted to announce that their sales for 2021 have exceeded $100,000,000, far surpassing the total for any previous year. This milestone signals an uptick in market growth and demonstrates the universal trust that both sellers and buyers place in the Stack’s Bowers Galleries name. In addition, many industry-wide records were set. In the April 2021 Hong Kong Auction, an 1825 pattern Russian Ruble established the record for the most expensive non-U.S. coin sold by an American auction house at $2,640,000. A countermarked 8 Escudos from the Philippines reached $180,000, the most expensive coin ever sold from the Philippines. An Oban from the Tensho Era became the most valuable Japanese coin ever sold at auction when it crossed the block for $1,920,000 and the same Pinnacle Collection sale contained an 1870 Japanese pattern set that reached $1,560,000. The strength of the Asian market was confirmed by strong demand for Chinese coins as four individual items crossed the million-dollar threshold. The crowning item of these standouts was a Year 17 Pattern Dollar that sold for $2,280,000, a record for a Chinese coin at the time. Other areas of growth included Tibetan issues, with a Year 61 Sho selling for $55,200, eleven times the low estimate. Demand for Iraqi and Egyptian issues soared, with proof examples commanding hitherto unimaginable prices. An AH 1352 20 Piastres from Egypt sold for $12,000, double the low estimate. 2021 proved a rallying year for previously depressed markets and allowed for rapid growth in numismatic markets that had not been reached, with very few types of coinage unaffected by the upward trajectory.

Ancient coins appreciated tremendously in the past calendar year, with Roman Aurei in particular experiencing an escalation in collector demand. A Macrinus Aureus of fine style graded Choice MS★ 5/5 strike and surfaces was bid to $312,000, a department record for an ancient coin. Examples of Aurei from Otho and Vitellius reached $204,000 and $120,000 respectively. Sicilian issues continued to grow in popularity with a Double Dekadrachm from the reign of Dionysios I reaching $55,200, far beyond the high estimate of $20,000.

The world paper money department also had a very successful year with total sales exceeding $6,000,000, a new record. In the December Hong Kong Auction, a banknote from the Yuan Dynasty fetched $60,000, well beyond its high estimate. A Reserve Bank of India Haj Pilgrim note reached $55,000 at the August ANA sale, becoming the most valuable Indian banknote ever sold at public auction.

The monumental 2021 sales total of $100 million was achieved through growth in the firm’s showcase and online events. The April 2021 Hong Kong Auction set a record for the largest numismatic auction held outside of the United States, with sales in excess of $34,000,000. The September Hong Kong Auction trailed only slightly with a final total of over $31 million. The December Hong Kong Collectors Choice Auction set the record for the largest online-only numismatic auction with sales exceeding $10 million. The flagship August ANA auction topped $13 million, and the January NYINC auction yielded $7.7 million, with the remaining internet auctions pushing the final tally over the $100 million mark.

With this exceptionally successful year nearly closed, Stack's Bowers Galleries turns its attention to its annual official auction of the New York International Numismatic Convention, which will take place January 14-20, 2022. The firm is now accepting consignments for their April 2022 Hong Kong Auction as well as their Collectors Choice Online Auctions. Anyone interested in consigning world coins and paper money to Stack's Bowers Galleries is encouraged to call 800-458-4646, email consign@stacksbowers.com, or visit https://www.stacksbowers.com/Pages/Home.aspx .