Newly-Discovered New England Shilling from 1652 Estimated to be Worth Over $300,000

The incredible discovery will be offered at online auction online by Morton & Eden in London on Friday 26 November 2021. 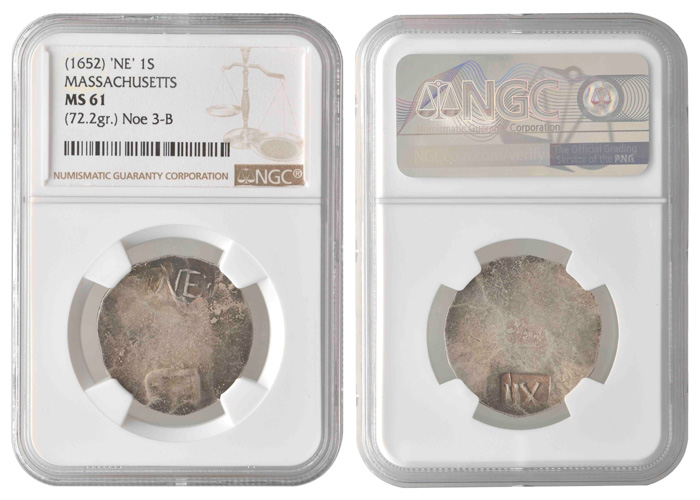 An extremely rare example of a mid 17th century New England shilling, one of the very first coins to have been struck in North America, has recently been discovered in an old sweet tin in the United Kingdom.

The coin was identified by coin specialist James Morton, who recounts; “There were several hundred coins in the old sweet tin. The coins were completely varied, from all over the world and in all metals, ranging in date from ancient times right up to the 1970s.

“I could see straight away that there were plenty of interesting pieces alongside some ordinary modern coins but there was one simple silver disc which immediately jumped out at me.

“I could hardly believe my eyes when I realised that it was an excellent example of a New England shilling, struck by John Hull in 1652 in Boston for use as currency by early settlers in the Massachusetts Bay Colony.”

The simple silver coin is of rudimentary and rustic design and bears the initials NE for New England, together with the Roman numerals XII (indicating 12 pence which equals one shilling) . The New England shilling is one of about 40 examples which are known to survive and has been certified as genuine and graded by NGC (Numismatic Guaranty Corporation). NGC have accorded the coin ‘mint state’ status, classing it as ‘MS61’. It is the only example of the issue to have been graded as mint state by either NGC or PCGS (Professional Coin Grading Service) and is therefore the finest recorded specimen of its type.

“The star of the collection ”, said James Morton, “is unquestionably the remarkable New England shilling, the plain appearance of which belies its extraordinary historic significance and outstanding original state of preservation’’.

Before 1652 coins in all metals from England, the Netherlands, Spanish Empire (and just about anywhere else) were traded in the New England settlements, alongside traditional barter exchange with friendly Native Americans. The ubiquitous wampum, made from shells, also served as convenient small change. By 1651, however, the inconsistency and general shortage of coinage had become an acute local problem which met with indifference from an England still suffering from the effects of Civil War. In consequence the Bay Colonists made their own decision to address the crisis and in May 1652 the Massachusetts General Court duly appointed a silversmith named John Hull (with his assistant, Robert Sanderson) as mintmaster in Boston, charged with responsibility for producing North America’s first silver coinage.

Hull’s initial, undated coins were struck during 1652 using silver bullion obtained mainly from the West Indies but the issue was not a success, accounting for the great rarity of survivors today. The ease with which the new New England coins could be clipped or counterfeited meant that they had to be replaced rapidly by more sophisticated pieces featuring Willow, Oak and, finally, Pine tree designs. Nearly all of these silver coins bear the date of original authorization -1652 – even though shillings, sixpences, threepences (and a very few twopences) were in fact produced over a period of three decades.

Hull and Sanderson’s ‘treasonous’ Boston mint was closed by Charles II’s government in 1682, not before some at least of its coins had made their way to England’s home shores. North America’s continuing need for local coinage persisted and was partially addressed by various issues, mostly of copper tokens, over the next century. It was not to be until 1792 that the official United States Mint was founded in Philadelphia and began to produce standard national currency.

These newly discovered early American coins have been consigned to Morton & Eden for sale by the art advisor, the Hon. Wentworth “Wenty” Beaumont, whose family seat is Bywell Hall in Northumberland’s Tyne Valley. One of Wenty Beaumont’s ancestors, William Wentworth (1616-97) is thought to have arrived in New England as early as 1636 and several members of the family were later to occupy prominent positions in Colonial America, including John Wentworth and his son (also John), both of whom represented New Hampshire in the Continental Congress of 1774-1781.

Wenty Beaumont recounts: “My father recently found the tin in his study. If he knew it was there he had long since forgotten about it. I’d never seen it before and when I opened it I thought it was just a rather bizarre collection of random old coinage. However as I don’t know anything about coins I felt it was worth checking out so I took it to show James Morton at Morton & Eden. I’m very pleased I did and needless to say I was completely amazed when James Morton pointed out how important the rare shilling was in the context of North American history. I can only assume that the shilling was brought back from America years ago by one of my forebears.”

The finest-known New England shilling, together with the Continental Currency pewter dollars and other coins from the sweet tin, will be auctioned online by Morton & Eden on 26 November, 2021.