The 2019 Red Book (72nd Edition of A Guide Book of United States Coins) debuts at the Baltimore Expo in March 2018. Image is courtesy of Whitman Publishing. The 72nd ed 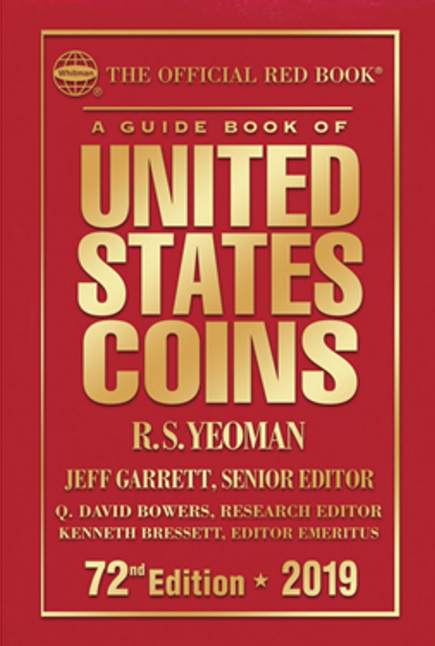 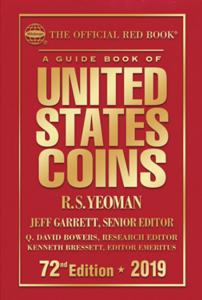 The 2019 Red Book (72nd Edition of A Guide Book of United States Coins) debuts at the Baltimore Expo in March 2018. Image is courtesy of Whitman Publishing.

The 72nd edition of “The Red Book,” an iconic, annually updated publication generations of coin dealers and collectors have trusted since 1946, will soon hit the streets and include some exciting additions. Officially known as A Guide Book of United States Coins, the 2019 Red Book entails 464 pages with 8,000 entries, 32,000 retail valuations, and a comprehensive review of all official United States coins from half cents through $20 double eagles, as well as commemorative coins, bullion issues, and colonial coinage dating to the 1600s.

While this venerable title has long been popular with coin dealers and collectors in every sector of the hobby, the 2019 Red Book makes new overtures to those who deal in and collect die varieties. There will be more close-up photographs of die varieties than ever before. Not only does this further educate readers on the peculiarities of certain doubled dies, overdates, and other varieties, but this also helps dealers and collectors better identify coins in their holdings that may contain a scarce or valuable die variety.

Another exciting set of additions includes expanded listings for foreign coins that circulated as legal tender before they were demonetized in the United States by the Coinage Act of 1857. These include Spanish-American, English, French, and Dutch coins minted between the 1550s and 1820s. While this section was introduced in the 70th edition of A Guide Book of United States Coins, it only continues growing with more listings, more photographs, and more historical information as the years roll on. Perhaps a continued focus on expanding this section of The Red Book will help spark further interest in this colorful, fascinating sector of pre- and early Federal-era coinage. Time will tell…

Other new things to look for in the 2019 Red Book are listings for the 2018 Centennial World War I silver medals that honor the United States Army, Navy, Marines, Air Service, and Coast Guard. There are also more commemorative coins listed in the new Red Book, such as the World War I silver dollar and the three Breast Cancer Awareness commemoratives – include the first-ever pink gold $5 coin. Additionally, there are 15 new coin sets and updated information for long-running current series like Lincoln cents, Jefferson nickels, Roosevelt dimes, America the Beautiful quarters, Kennedy half dollars, and Native American dollars.

Changes also come to The Red Book’s “Top 250 U.S. Coin Prices Realized at Auction” appendix, including two new million-dollar coins, totaling 95 entries that surpass the seven-figure threshold. Perhaps most intriguing about this particular update to The Red Book is that it serves as an anecdotal narrative on the state of the coin market, which is showing promising signs of growth in many areas following the market malaise of the Great Recession a few years back.

Overall, the 2019 Red Book will be a fantastic addition to any coin collector’s personal library, and it’s sure to be a big seller for coin dealers who stock it on their shelves. The new full-color edition ranges in price from $15.95 for a spiral-bound copy up to $99.95 for a leather-bound limited edition. The 2019 Red Book will debut at the Whitman Publishing booth during the Baltimore Expo, which will be held at the Baltimore Convention Center March 22-25, 2018. Whitman Publishing is also accepting pre-orders on their website.