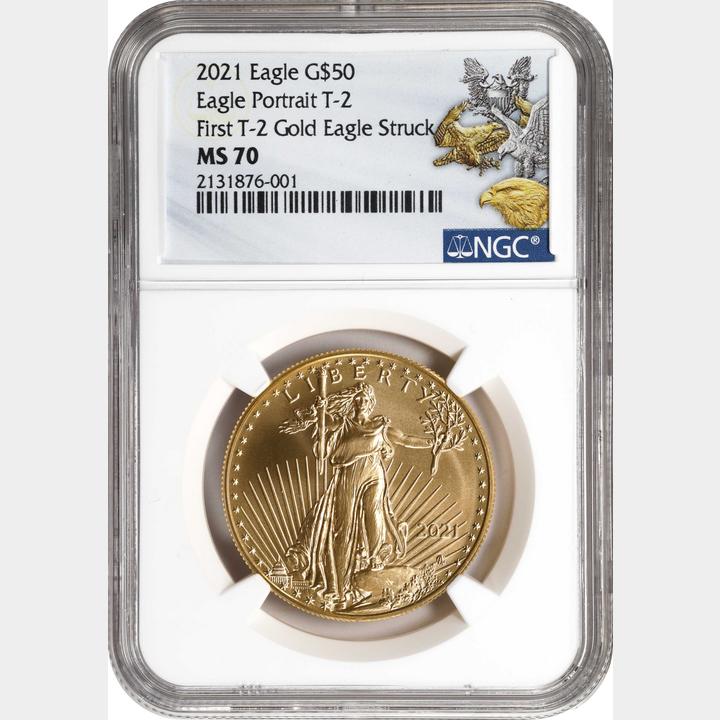 The top price of the session was realized by the very first struck 2021 American Eagle gold coin of the new Eagle Portrait (Type 2) reverse design. Graded MS-70 by NGC, it realized $100,000 and set a new record for the most valuable 1 ounce American Eagle gold coin ever sold at auction, more than tripling the prior record of $29,700. The very last struck of the outgoing gold Family of Eagles (Type 1) reverse design also realized a strong price of $77,500 , more than doubling the prior record.

Several records were also set among the American Eagle silver coins. The very last coin struck of the classic Heraldic Eagle (Type 1) reverse design realized $85,000 and set a new record for the most valuable Uncirculated (bullion) strike to sell at auction. This astounding result is nearly two-and-a-half times the prior record of $34,500. The very first struck of the new Eagle Landing (Type 2) reverse design also achieved more than double the prior record, realizing $80,000 in the Stack’s Bowers Galleries sale.

These special coins were struck to celebrate the 35th anniversary of the American Eagle series and the debut of new reverse designs and refreshed obverse designs released in April 2021. Produced with care in a special striking ceremony at the West Point Mint by former Mint Director David Ryder, they capture a historic transition between the very last coins struck of the classic designs and the very first struck of the new designs. Stack’s Bowers Galleries was selected by the Mint to offer these coins exclusively in their Summer 2022 Auction, marking one of the few times the Mint has engaged with a third-party auctioneer for the release of a special product.

The $4.6 million realized by the 35th Anniversary coins contributed to over $60.1 million in total prices realized across the firm’s entire Summer 2022 Global Showcase Auction, representing the single largest sale in the firm’s 89-year history. On the heels of such a successful offering, the firm is now finalizing their Official Auction of the Whitman Winter 2022 Expo, which will be posted on their website for pre-bidding in the coming weeks. Featuring U.S. coins, U.S. currency, and Numismatic Americana, this event will be highlighted by Part II of the Sydney F. Martin Collection that will offer 1785 and 1786 Connecticut coppers, Washingtonia, Rosa Americana coinage, and select French Colonials. For questions about the 35th Anniversary American Eagle coins, their Winter 2022 Showcase Auction, or to consign your coins to a future auction, contact Stack’s Bowers Galleries today at Info@StacksBowers.com or 800-566-2580.