The 1787 Brasher Doubloon is one of the most important and historic of all American coins, and this past week it made headlines when it traded hands for more than $5 mi 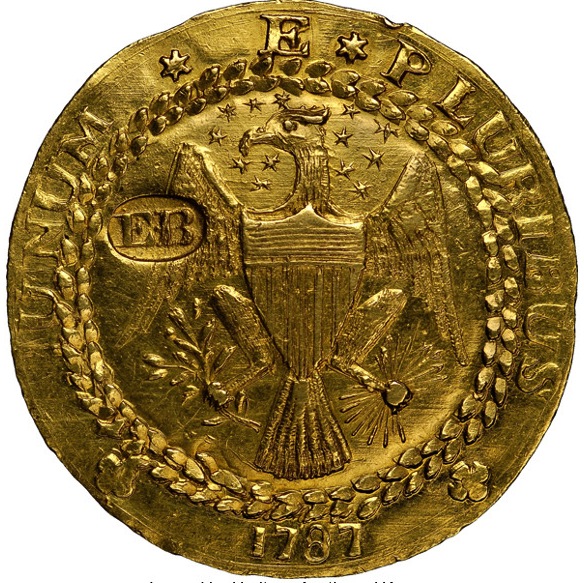 The 1787 Brasher Doubloon is one of the most important and historic of all American coins, and this past week it made headlines when it traded hands for more than $5 million in a private deal. The transaction, involving Heritage Auctions, Monaco Rare Coins, and an anonymous West Coast coin collector, reasserts the Doubloon as one of the most valuable American coins.

The details behind the sale of this 1787 Brasher Doubloon, which becomes the most expensive item Heritage Auctions has ever sold, remain secret, per the terms of a non-disclosure agreement between the buyer and seller. But Heritage Auctions Executive Vice President Todd Imhof proclaims in a press release this is a watershed moment both for his company and all of numismatics. “The Brasher doubloon is truly one of the greatest numismatic rarities in the world,” Imhof said. “We are grateful to both Adam Crum at Monaco and to the prominent collector who purchased the coin for the opportunity to place this numismatic treasure in a new home. It is certainly one of the most exciting transactions I’ve ever been a part of.” Adam Crum of Monaco Rare Coins expresses his own enthusiasm for their part in this landmark transaction, saying, “We have had the honor of owning this amazing piece of history since 2014 and take pride in knowing our firm will be forever etched into its provenance.”

This example of the 1787 DBLN Brasher Doubloon, graded NCG/CAC MS63, is the finest of the only seven such coins known to exist. Heritage previously sold the coin in January 2014 for $4.58 million, which then set a record auction price for the coin. However, the coin has been well documented in the media since long before its banner auction appearance in 2014. The Brasher Doubloon became a star in the 1940s, when it was the subject of a theft in Raymond Chandler’s 1942 novel The High Window. The book soon inspired The Brasher Doubloon, a major motion picture released in 1947 by 20th Century Fox. Starring George Montgomery and Roy Roberts, the film still has mostly favorable reviews on popular movie ratings website Rotten Tomatoes.

The Brasher Doubloon grabbed the international headlines in 1979, when it realized $725,000, becoming what was then the world’s most expensive coin. Various examples of the Brasher Doubloon have since crossed the seven-figure mark and are among the most popular of all pre-federal-era United States coins.

Doubloons were actually one of many coins proposed for potential widespread adoption as United States coinage, but the Brasher Doubloon stands above the rest in fame and lore for a variety of reasons. The coin’s namesake, Ephraim Brasher, was a New York silversmith and neighbor of George Washington. The Brasher Doubloon also has the coveted claim to fame as the first truly American gold coins. Their original design, incorporating New York’s state coat of arms on one side and Great Seal of the United States on the other, depicts an eagle clutching an olive branch and arrows, along with Brasher’s initials, “EB” inside an oval on the eagle’s right wing. Brasher’s surname, BRASHER, is sprawled under the main obverse motif, depicting the sun rising over a mountain peak and sea. The inscription NOVA EBORACA COLUMBIA EXCELSIOR translates to “New Your, America, Ever Higher.”

The Brasher Doubloon weighs about 408 grains and had a value of $15 in New York currency and was roughly worth the equivalent of a Spanish doubloon, equal to 16 Spanish dollars. Spanish dollars circulated throughout the young United States and became the basis for the concept of the silver dollar, which the emerging nation eventually adopted as its standard unit of currency.

Excellent article but why two pictures of the same side and none of the other side? Did Brasher produce any other coins besides this one?