A $20 Gold Piece Straight Out of the Old West Sells for $1.62 Million to Set World Record 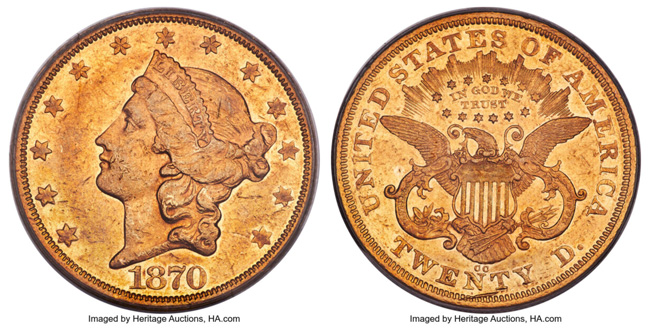 Bidders fought long and hard over the Carson City gold coin with a reported mintage of only 3,789 pieces. In fact, even before the live auction began Thursday night, the world record had been set by spirited pre-bidding – proof that this coin, graded AU53 to make it the finest certified at PCGS, had drawn the attention of collectors eager to add this classic Old West rarity to their assemblages.

Carson City gold is well known as an avidly collected area of United States numismatics. The problem is that about 150 years ago, $20 gold pieces were widely circulated and often used in commerce. Later, many gold coins were melted down, only further diminishing the number of pieces available today.

As a result, in 2021 only about 35 to 45 of these 1870-CC $20 Liberties are known to exist in any grade. That alone puts them out of reach of most serious collectors, who now vie for this wildly scarce mintage like gunslingers every time one reaches the auction block.

“While Carson City coins have always been popular with collectors, we are seeing unprecedented demand at auction for the best pieces,” says Sarah Miller, Heritage Auctions’ Senior Vice President and Deputy Managing Director of the New York Office. “This storied rare date carries the history and excitement of the Old West, making it a true prize for the Carson City or Double Eagle collector. Far more than just filling the hole in one’s set, this coin is an absolute highlight of any CC collection.”

Not only is this $20 Liberty, from the Prestwick Collection, a higher grade than typical, but it was also the plate coin featured in famed numismatic author Douglas Winter’s book Gold Coins of the Carson City Mint. Which means it’s something of a famed offering – more so today, given its status as the world-record-holder.

It’s also something of a unicorn: The finest-known example, an NGC AU58, was mysteriously stolen from a Brinks truck and never available at public auction. That tragedy makes this one a huge coup for the bidder who managed to hit the bull’s-eye Thursday night.

The US Coins Signature® Auction continues through Sunday.