A Low Cost Set of Indian Head Half Eagles 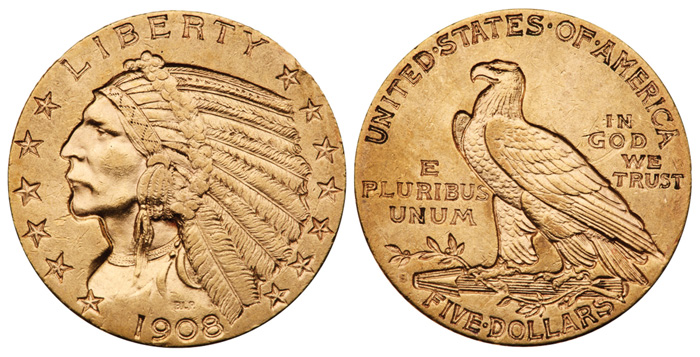 A set of AU grade Indian Head half eagles would cost only a small fraction of the cost of a set in MS64 to MS66 grades. For example, the CPG ® retail price estimate for an AU50 grade 1912-S is $704 while the CPG® estimate for a MS65 grade 1912-S is $186,000. No one is disputing the point that a certified MS65 1912-S is likely to be of much higher quality than a certified AU50 1912-S. Regardless of the latter’s imperfections, however, an AU50 grade 1912-S might be a better value for most interested collectors and would certainly be more likely to fit into the respective budgets of most collectors of classic U.S. coins. If I had $10 billion, though, I might spend $186K for a 1912-S half eagle that I really liked 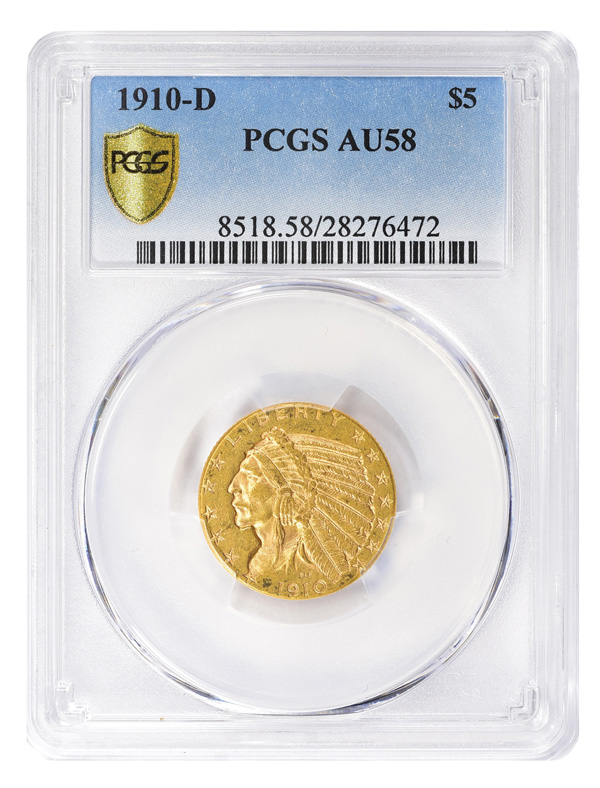 For the presently discussed quest to have meaning, all the dates, including the just mentioned 1909-S and 1915-S, should be included, except perhaps the 1929 as it is from a different political and economic era. When I was a kid, collecting by date meant including all combinations of year plus mint location! I have been talking to coin collectors for decades and have interviewed many.

I never met anyone who collected post-1838 U.S. coins by date and ignored mintmarks. When the PCGS registry was founded, I found it odd and incorrect that PCGS referred to collecting by year as collecting by date! 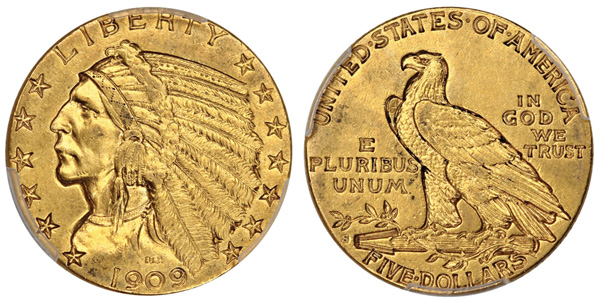 As far as I know, a set of Lincoln cents has always needed to include a 1914-D and a 1909-S VDB. It would otherwise be incomplete. No collector who I ever knew thought that the requirement for a 1914-Denver Mint Lincoln cent could be avoided by acquiring only a 1914 Philadelphia Mint cent.

For building a set of AU grade Indian Head half eagles, one strategy is to be a price-buyer and be aware that many coins acquired will have substantial imperfections in addition to ordinary wear. Tens of thousands of Indian Head half eagles were accidentally or deliberately harmed, usually while being kept for their gold content. Moreover, many dealers artificially brightened them to make these more salable or used substances to cover contact marks and scratches. When coins are sold to the general public, many sellers figure that very few buyers will carefully inspect the coins and know how to interpret them.

There are also collectors and non-collectors who received gold coins as gifts and then cleaned them with chemicals that harmed the surfaces of the coins. There were varying degrees of harm due to different kinds of cleanings. Is there a clear dividing line between cleaned coins that receive numerical grades from grading services and those that are placed in “Details’ holders without numerical grades? 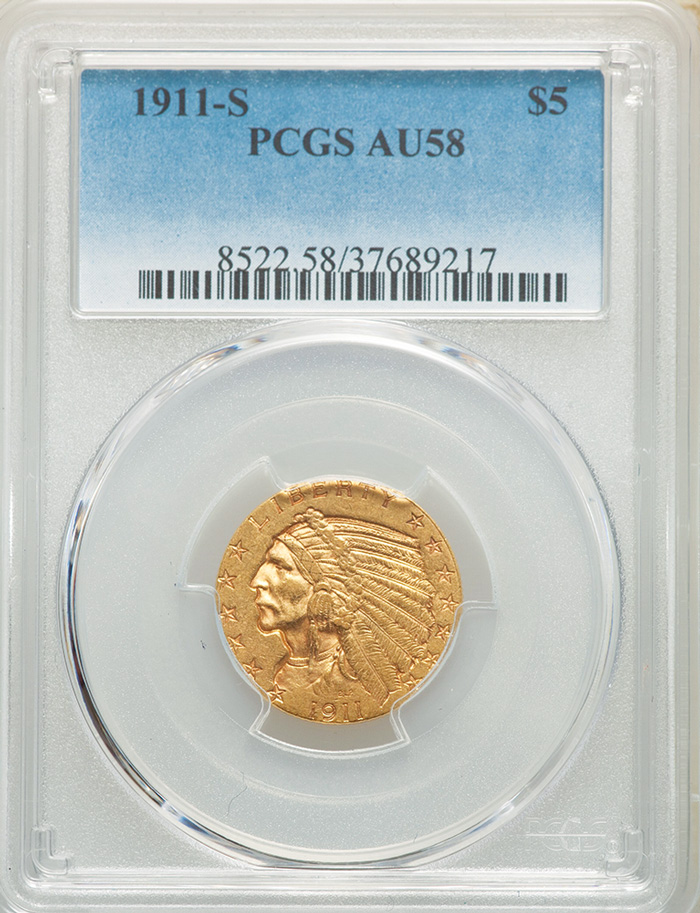 Two Indian Head half eagles of the same date that have been graded AU55 by the same grading service may be tremendously different in terms of originality and surface quality. Those collectors who are very interested in originality and technical factors should devote time and effort into examining coins and posing questions to experts. Those who are not so interested in the physical characteristics, however, may just buy certified AU grade Indian Head half eagles and enjoy assembling a set without thinking much about the quality of the coins.

In the framework of classic U.S. gold coins (1795 to 1933), AU grade Indian Head half eagles are extremely inexpensive. A set of Capped Head half eagles (1813-34), in contrast, would cost well over a million dollars to even 90% complete by date in AU50 or higher grades.

A price-buyer, someone who shops for relatively low priced items, of AU grade Indian Head half eagles should not obsess about quality or originality and should accept the reality that a few coins acquired may have glaring imperfections. Some of the coins acquired will have been significantly cleaned, artificially brightened, banged up or substantially scratched. These are still true classic U.S. gold coins that are enjoyable to collect and learn about.

Beginners may become knowledgeable collectors through experience, careful thinking, and effecting inquiries. Some collectors do not wish to take the time and put forth the effort to become knowledgeable. They just wish to enjoy collecting. AU grade Indian Head half eagles are especially suitable for more than one kind of collecting objective. A relatively low cost set can be completed in a matter of months.

Key dates are discussed after common dates, as I suggest collectors complete most of the set before acquiring the two keys. It makes sense to gain some buying experience and to see a significant number of pertinent coins before buying the most expensive coins in a set.

In circulated grades, the 1914 and the 1914-D are among the most common dates. In gem grades, they both command substantial premiums.

The 1915-S is surprisingly scarce in a series that is characterized by common coins, several of which are extremely common. Indeed, my research indicates that the number of 1915-S half eagles that survive is dramatically lower than the number of survivors for each of the common dates. The 1908, the 1909-D, the 1912 and the 1913 are among the most common. 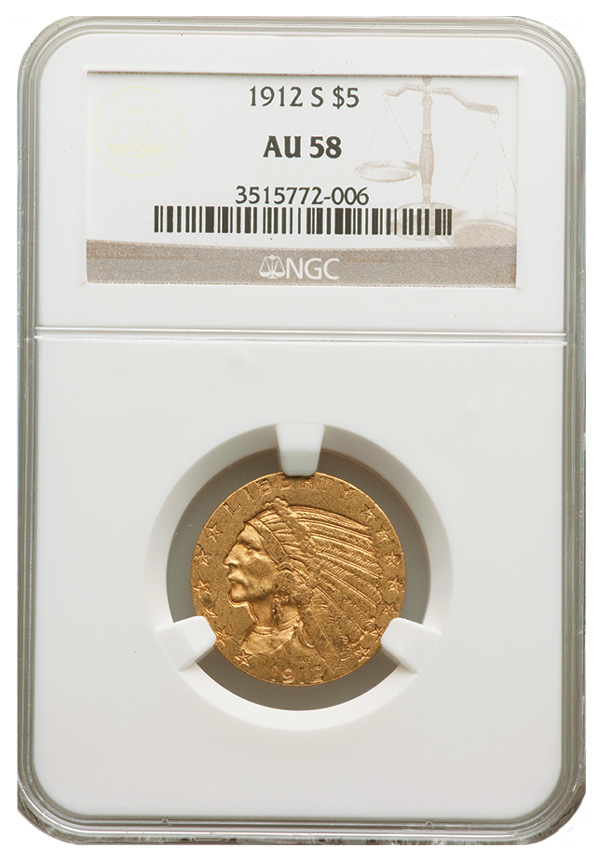 Indian half eagles were not minted again until 1929. Public opinions regarding U.S. gold coins had changed in the interim. They were much less likely to be spent.

The 1929 Indian Head is certainly extremely scarce and is probably almost rare. I figure that there are between 480 and 635 1929 half eagles in existence. These did not circulate to a significant extent. Some choice uncirculated 1929 half eagles were properly stored, though many were terribly treated by people who knew little about scarce coins.

On March 25, Stack’s Bowers auctioned a 1929 half eagle in a PCGS holder with a details label, “Cleaned – UNC Detail.” This 1929 realized $24,000. This is the only coin mentioned so far in this discussion that I have examined. This 1929 half eagle was processed to the point that its color is extremely unnatural, and it has additional problems. 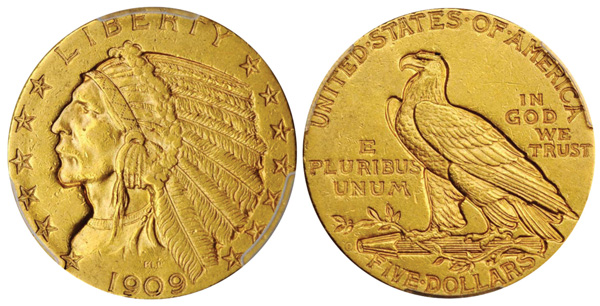 A 1929 half eagle, which Heritage auctioned in February for $11,700, may have been a better value. I did not see that 1929 half eagle, though images suggest that it has numerous pricks and several gashes. The label on its PCGS holder indicates that it is genuine, “Damage – AU Detail.” Its detail is impressive. Back in June 2018, Stack’s Bowers auctioned a PCGS graded AU50 1929 for $19,200.

As the 1929 is from a later era and really is historically distinct from the other Indian Head half eagles, a set dating from 1908 to 1916 may be complete enough in the minds of most interested collectors. The 1909-O would then be the only key.

For less than $35,000, perhaps much less, a collector could build a set of PCGS or NGC certified AU grade Indian Head half eagles, missing a 1929, though with most coins certified as grading AU55 or higher. Including a 1929, the total cost could be well under $60,000. The total cost of a complete set may be significantly reduced if a 1909-O and a 1929 in XF40 grade or in Details holders were selected. 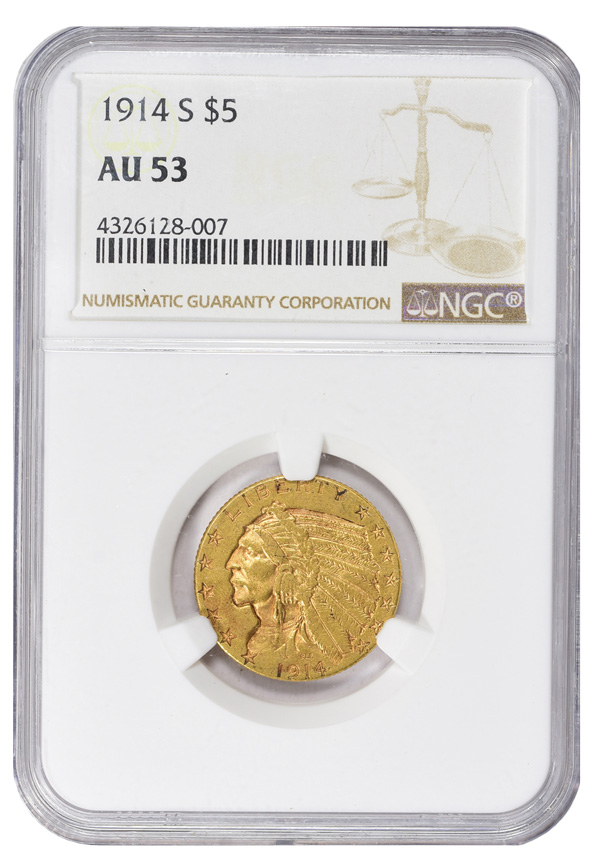 In contrast, a set of PCGS or NGC graded MS65 grade Indian Head half eagles may cost as much as $1.5 million, if it could even be completed. A set of certified MS64 grade Indian Half eagles might cost $500,000 in 2021.

Although all classic U.S. gold coins could very well rise in value during this decade, coin buyers should not assume that they will rise in value at all. It is important for each collector to spend amounts that he or she can afford to lose, while enjoying collecting. It is often fun to build several sets of very different design types.

Subscribe to July 2021 edition of CPG Market Review for the industry's most respected pricing and to read more articles just like this.