A Remedy to the Same Old Ways of Coin Collecting 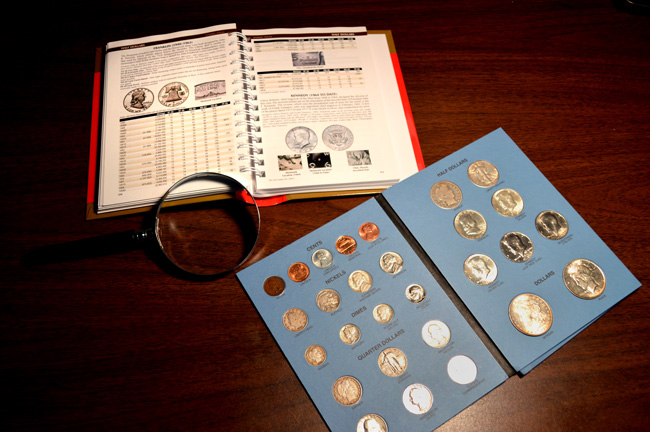 Here are some traditional and new ways to collect coins

Here are some traditional and new ways to collect coins

There are many different ways to collect coins, as there are coin collectors. It doesn't matter how you collect coins, but an essential aspect is that you enjoy assembling your collection and collect what you like. In every coin collecting journey, there comes a time where your interest in coins may wane. Sometimes it's for issues that occur in your life, such as marriage, children, school, etc. Other times, it may be because you are bored with the way you are currently collecting coins.

The most traditional way to collect coins is to assemble a Date Collection. A Date Collection requires you to obtain an example of every date that a particular series or type of coin was produced from each mint that produced it. Sometimes this is also referred to as a date and mint collection.

This is one of the most popular ways to collect U.S. modern coins. Unfortunately, it can also be the most challenging and expensive way to collect coins too. Most series of coins have what is called a "key date" coin. These tend to be showstoppers for most collectors who are trying to assemble a complete date and mint mark set for a particular series of coins because they are too expensive for their coin collecting budget.

For example, if you are trying to assemble a date and mint mark collection of Morgan dollars, in order to complete your collection, you will need to purchase four different coins that have the 1893 date on them. The table below lists prices for average circulated (Fine-12) specimens from each of the four mints where they were produced: Philadelphia, Carson City, New Orleans, and San Francisco. On the other hand, a year set (see below) would only require you to purchase one of them, usually the least expensive coin.

Assembling a Year Collection of coins only requires one coin from each year without regard to the mint mark. This strategy allows you to avoid having to purchase a costly coin because of a rare date and mint mark combination. Therefore, you can purchase the lowest-priced coin for a particular year for your collection. Additionally, you may wish to purchase better grade coins since you will have fewer coins to buy and more flexibility since you do not have to obtain one from each mint.

For example, 1893 Morgan dollars were minted at four different mints: Philadelphia, Carson City, New Orleans, and San Francisco. The table below lists prices for average circulated (Fine-12) specimens from each of the four mints where they were produced. Assembling a Year Collection of circulated Morgan dollars means that you could purchase the lowest-priced coin from the issues listed below. This is significantly cheaper than the $5,470 you would need to spend to assemble a Date Collection.

Another traditional method of coin collecting is to assemble a Type Collection. A Type Collection of coins is where you collect one of each type of coin from a particular country, denomination and/or period of time.

Some collectors define type collecting as collecting every different variation of a coin or subtype. For example, the Shield nickel (1866-1883) had two different types of reverses. The first reverse (1866-1867) had rays in between each of the stars. This is known as a "Shield Nickel with Rays." The second reverse (1867-1883), does not have the rays and is known as a "Shield Nickel without Rays."

Other collectors will want to get very detailed and collect every subtype and minor type of coin ever minted. This can be done for an entire country or a particular denomination within that country. For example, Lincoln cents with the wheat stalks on the back were minted from 1909 until 1959. There are several different minor types that some collectors want to acquire. They are Wheat Ears; V.D.B. on the reverse (1909), Wheat Ears; no V.D.B.; no designer's initials (1909-1916), Wheat Ears; designer's initials on the truncation of Lincoln's bust (1917-1942 and 1944-1959), and Wheat Ears, Zinc Coated Steel (1943).

A type collection affords you the ability to see all the different types and styles of coins that were minted by a particular country at a particular time. Usually, these sets can be assembled for minimal cost unless there are certain issues that are rare or contains expensive precious metal.

Some coin collectors may specify a date range that their denomination collection covers. For example, you could have a coin collection that includes all denominations of the United States in the 20th century (1900 to 1999). This would include: a cent, nickel, dime, quarter, half dollar, silver dollar, Quarter Eagle ($2.50 gold), Half Eagle ($5.00 gold), Eagle ($10.00 gold), and a Double Eagle ($20.00 gold) that are dated between 1900 and 1999. Specific years, mint marks, and types are irrelevant in this method of collecting coins.

Denomination collections can typically be assembled for a reasonable cost if there are no showstoppers. This may include rare coins or coins that contain precious metals that are beyond your collecting budget. A complete denomination collection of United States coins would consist of one coin from each of the following denominations:

A Birth or Anniversary Year Collection consists of each type of coin issued in a specific year. Many people assemble a year collection for the year of their birth or the anniversary of a special event. Another option is that you may wish to obtain an issue from each mint that produced a coin for that year.

If, for example, you would like to assemble a year collection from 1969, you would need one of each of the following coins with the date of 1969 on it. This can be as easy as purchasing a mint or proof set for that year.

If you would like to assemble a year set from 1969 with one of each coin from each mint that produced coins in 1969, you would need one of each of the following coins:

Assembling a coin collection based upon a particular theme can stretch around the world. This is a great way to introduce children to the hobby of coin collecting by picking a theme that particularly interests them. I have seen children collect coins that have queens or kings on them. Other topics include fish, flowers, marine life, horses, birds, boats, fish, coins with holes, not round coins, etc. A beautiful collection of exotic coins can be assembled from around the world on a minimal budget.

The world of medals and tokens is a vast area that covers the metallic arts produced by sovereign mints and private mints. The artworks can range from small and unsophisticated designs on white metal to large format metals that can exceed 3 inches in diameter.

A particularly popular area of exonumia is known as Hard Times tokens. Hard Times tokens are American large or half-cent-sized copper tokens, struck from the 1830s through the 1840s, serving as unofficial currency. These privately made pieces, comprising merchant, political and satirical pieces, were used during a time of political and financial crisis in the United States. Numismatic author Q. David Bowers has published A Guide Book of Hard Times Tokens.

Finally, So-Called Dollars are medals approximately the size of a silver dollar that was struck to commemorate a U.S. historical event. They were made in a variety of compositions, including copper, brass, silver, and some rare medals produced in fine gold. Harold E. Hibler and Charles V. Kappen authored a guidebook titled So-Called Dollars.

I can think of another one. Collect all "variations" of the international versions of a particular denomination. For instance, "nickels" have been produced by (at least) USA, Canada, Panama, British Caribbean Territories, etc. etc. Similar size, weight, composition.

I think it sounds pretty interesting... I like it.. I still love the old fashioned way but this is pretty cool as well

Good article! Did you forget to list the half dollars in the Denomination Collection section?

I’m doing a Year Collection of Morgan Dollars. My goal is to get all the Carson City Dollars and then usually a nice example of the S mint for the other years. I may make an exception with the 1895 S. So far I have the 8 most common CC dollars.