The marketplace for collectable paper money can increasingly be seen as two parallel, and not necessarily mutually consistent, universes — the auction marketplace and the private sale marketplace. 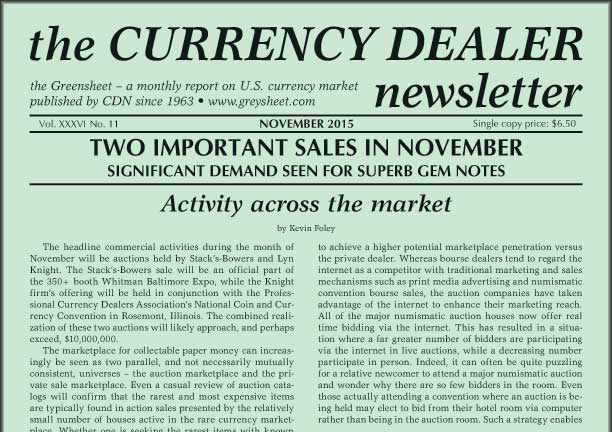 The headline commercial activities during the month of November will be auctions held by Stack’s-Bowers and Lyn Knight. The Stack’s-Bowers sale will be an official part of the 350+ booth Whitman Baltimore Expo, while the Knight firm’s offering will be held in conjunction with the Professional Currency Dealers Association’s National Coin and Currency Convention in Rosemont, Illinois. The combined realization of these two auctions will likely approach, and perhaps exceed, $10,000,000.

The marketplace for collectable paper money can increasingly be seen as two parallel, and not necessarily mutually consistent, universes — the auction marketplace and the private sale marketplace. Even a casual review of auction catalogs will confirm that the rarest and most expensive items are typically found in action sales presented by the relatively small number of houses active in the rare currency marketplace. Whether one is seeking the rarest items with known populations measured in the single digits, or material at the very upper end of the quality spectrum with similar rarity within a particular grade, the likelihood of finding such items in a major auction is greater than in a dealer’s inventory.

Indeed, one of the frequently heard laments from many dealers is the fact that more and more of the better items are coming on the market via the auction route versus being offered through a private dealer, either on a consignment/commission basis or via outright sale. There are a number of reasons for this. The likelihood of finding the proverbial highest buyer is arguably greater through the auction mechanism versus a private offering. The major auction companies simply have greater promotional resources available to them to achieve a higher potential marketplace penetration versus the private dealer. Whereas bourse dealers tend to regard the internet as a competitor with traditional marketing and sales mechanisms such as print media advertising and numismatic convention bourse sales, the auction companies have taken advantage of the internet to enhance their marketing reach. All of the major numismatic auction houses now offer real time bidding via the internet. This has resulted in a situation where a far greater number of bidders are participating via the internet in live auctions, while a decreasing number participate in person. Indeed, it can often be quite puzzling for a relative newcomer to attend a major numismatic auction and wonder why there are so few bidders in the room. Even those actually attending a convention where an auction is being held may elect to bid from their hotel room via computer rather than being in the auction room. Such a strategy enables them to mask from public view exactly what their commercial interests are and what they personally are willing to pay. Internet bidding offers real anonymity from outside scrutiny for auction bidders and deprives in person observers of the valuable intelligence of knowing exactly who is buying – or even attempting to buy – including what and the levels they are willing to pay.

Another reason why auctions have increased in popularity with sellers is the simple fact that auctions offer the distinct advantage of perceived market level verification for buyers. When a given item is made available by a seller in a private transaction for $20,000, there is no independent reference point for that specific item to confirm that the price is logically related to the current market. The auction process, however, through the open and transparent bidding mechanism, confirms what others are willing to pay and offers assurance to the highest bidder that someone, sometimes several someones, was actually in the real world willing to pay amounts just under what the winning bidder actually was just about to pay as the auction process unfolded.

Sometimes in the world of numismatics there is a tendency to see “the market” as an independent force that exists outside the rest of the economy. This is really not the case at all. Indeed, one of the reasons for the growing popularity of hard assets in general, of which rare currency is simply one subset, is the fact that in an effort to stimulate the economy the Federal Reserve System has held interest rates to historically low levels for the past half decade or more. With the real rate of return from traditional time deposits actually in negative territory when the shrinkage of real buying power is factored in, it is perhaps not surprising that those who have accumulated discretionary wealth are increasingly searching for alternative storage mechanisms for such assets.

Over the past half year there has been on again off again speculation as to whether the Federal Reserve will continue the essentially zero interest rate environment. The questions arises: What will the effect on the marketplace for rare currency be if — or perhaps more realistically, when — an interest rate increase comes to pass?

With interest rate movements typically implemented in 1/8% to 1/4% steps, it is open to serious question whether an increase in borrowing rates of even a full percentage point would seriously impact the attractiveness of numismatic investments versus alternatives. One impact on the wider economy often overlooked, however, is the effect of rising interest rates on the exchange value of the dollar versus other currencies. Rising interest rates for dollar based investments would have a tendency to increase the value of the dollar versus other currencies, thus making purchases that are generated by foreign buyers relatively more expense for them and purchases of material offered from foreign sources relatively less expensive for dollar based buyers.

One area of the currency marketplace I believe would be most measurably impacted by rising United States interest rates and a strengthening dollar would be the world currency specialty area. Over the past half decade this has been the fastest growing area of buyer interest and has moved from a somnolent backwater attracting largely beginning buyers motivated by the low price levels that formerly existed here, to one featured in a growing number of auction house offerings and actually having a rising number of auction firms throughout the world including reasonably large sections of world material in their sales.

A dollar strengthened by rising interest rates here would tend to attract foreign based sellers of world currency to find United States based auction houses increasingly attractive as selling venues for their material. They would in effect be able to obtain greater ultimate purchasing power for their now sold material arising from a dollar based transaction exchanged later for their own currency than for one taking place for that currency in the first place.

But what effect would rising interest rates have within the wholly domestic United States marketplace for collectable paper money. Versus 15-20 years ago, thanks largely to the greater confidence financing sources – and purchasers – have about the actual quality and marketability of the items they are financing and/or purchasing due to third party certification by PCGS-Currency and Paper Money Guaranty Corporation, financing money for numismatic acquisitions is more available than ever before, currently at rates around 10% per year. Would an increase in long short term rates of even a full percentage point have a significant deterrent effect on buyers acquiring rare currency in the expectation of future price increases? Asked another way: Would an increase of $1,000 per year in the carrying costs of financing a $100,000 numismatic purchase likely take up so much of the anticipated future profit realization as to deter an acquisition from taking place at that level in the first place? My own answer is that I rather doubt it, except perhaps for the most risk averse marketplace participant.

As numismatic items in general have moved away from being purely a hobby and morphed into a serious investment mechanism, those participating in such purchases and sales would be well advised to remember that as an investment numismatic material is simply one of a considerable number of even more traditional wealth storage mechanisms. The world of numismatics does not exist in a bubble walled off from the rest of the economy and general economic trends.

We would all be well advised to remember that.