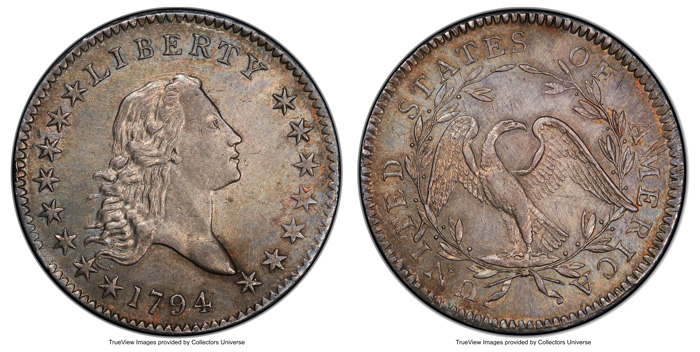 While America gained its independence in 1776, it took quite some time for the fledgling nation to strike its own coins for use in commerce. For several years, the US used a ragtag mix of British coins, Spanish coins, and locally produced pieces from states such as New Jersey and New York to trade. This confusing combination of different types of money and different denominations was certainly not ideal, so in the 1790s, the US Mint set out to start correcting the issue to the degree that they were able.

Even so, things began slowly. The newly-created official US Mint in Philadelphia started with simply copper coins--half cents and Cents--before eventually striking silver coins such as the Half Dime and Half Dollar. The first Half Dollars were made in 1794 and were produced in relatively small quantities. Being the first year of issue adds to their coins' allure, as does the fact that out of the few that were made, not very many pieces survived in excellent condition. Such coins are often heavily worn or damaged.

Heritage will be offering a special piece that is far nicer than average, graded PCGS AU58+. In other words, this coin has just the lightest trace of wear and returns nearly all of its original detail. With only a handful of coins known in Mint State (unworn) condition, this coin would be a dream piece for many collectors to own!

Researchers have differing opinions about exactly how many 1794 half dollars were struck, but the prevailing consensus (based on Mint delivery warrants) suggests 5,300 1794 half dollars were delivered in December 1794 and 18,464 half dollars dated 1794 were delivered on February 4, 1795 for a total of 23,464 pieces struck. A survival rate between 3% and 4% -- typical for early Mint issues -- further supports the estimated mintage. Approximately 800 1794 half dollars are thought to survive, including all grades and varieties. This AU58+ example, which is variety Overton-105, combines rarity and wonderful condition with history. This is an early American piece that one can imagine being held by one of the Founding Fathers.