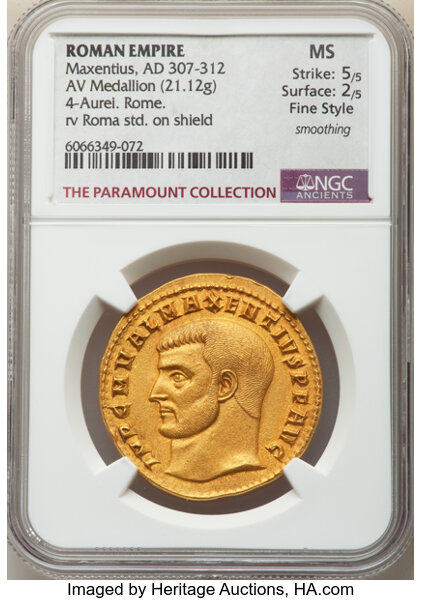 DALLAS, Texas (Nov. 8, 2022) – One of just two known examples of a medallion from one of the best and most important collections of ancient coins ever sold through Heritage Auctions sold for $312,000 to lead Heritage’s World & Ancient Coins Platinum Session and Signature ® Auction to $5,687.936 Nov. 2-4.

The Maxentius (AD 307-312). AV quaternio or medallion of 4-aurei (33mm, 21.12 gm, 1h). NGC MS 5/5 - 2/5, Fine Style, smoothing is exceptionally rare and comes from the Paramount Collection, one of the top troves ever sold by the world’s leading numismatic auctioneers.

“The winning bidder’s collection just added an exceptional coin from an important collection,” says Cris Bierrenbach, Executive Vice President of International Numismatics at Heritage Auctions. “This magnificent specimen offers ample evidence of the continued surge in demand for high-end international and ancient coins, and that Heritage Auctions remains the premier destination to acquire them.”

A Free City gold “City View” 5 Ducat 1698-GFN MS62 NGC , by G.F. Nurnberger, is a monumental multiple Ducat across numerous categories, including size, and absolute and conditional rarity that closed at $78,000. This “city view” type is traditionally associated with the Peace of Rijswijk, effectively ending the Nine Years’ War between France and the Grand Alliance, but it has been suggested that the commemoration of the 50th anniversary of the Peace of Westphalia as a potential reason for this issue’s production.

The finest certified example of a British India William IV gold Proof Restrike 2 Mohurs 1835.-(c) PR67 Cameo PCGS brought a winning bid of $72,000. Among all half, single and double Mohur Restrikes currently submitted to NGC and PCGS, only two others grace the lofty PR67 designation, including a single other 1835 2 Mohurs notably lacking the “Cameo” designation bestowed upon this magnificent example.

An exceptional Claudius II (AD 268-270). AV medallion of 8 aurei (37mm, 39.09 gm, 12h). NGC Choice VF 4/5 - 2/5, Fine Style , boasting an ornate military bust of the heroic ruler, ended at $63,000. After Gallienus was assassinated during the siege of Milan in mid-AD 268, Claudius acclaimed emperor in his place by his fellow officers. The Senate approved Claudius’ elevation, but the all-important soldiers proved restive, as Gallienus had treated them well. Claudius was forced to buy them off with a massive bribe of 10 gold aurei apiece. The highest officers likely received payment in the form of gigantic gold medallions of 8 aurei struck at the mint of Milan, like the example in this lot. These were the largest Roman gold pieces struck to that point, and the reverse made a plea for “harmony in the army” (CONCORDIA EXERCITVS).

A beautiful rarity from a limited-edition presentage mintage of just 20 examples from the Great Engraver Series that highlighted the masterworks of William Wyon, a technically flawless kilo issue of an Elizabeth II gold Proof “Gothic Crown Quartered Arms” 1000 Pounds (Kilo) 2021 PR70 Ultra Cameo NGC reached $58,000. This example is one of only a handful in the kilo size to come to market over the last year.

Petropolis Collection
The auction included 256 lots from this extraordinary collection of seldom-seen Brazilian gold rarities. The Petropolis Collection includes the magnificent specimens from the early days of coin minting until the fall of the empire and the start of the Republican era. The main focus of the collection was to complete the gold series — a tall task when considering how many dates and types have such limited known populations. The lots in this auction represent the second of three parts of the Petropolis Collection, which includes popular rarities from the 6400 series, as well as many coins with impressive grades. It is exceedingly rare to see this many scarce Brazilian pieces offered at the same time, making this auction a priority destination for Brazilian gold collectors.

Highlights from the Petroplis Collection include, but are not limited to: