Lincoln cents are the most collected of all coins and examples with original mint red surfaces command huge premiums. But is it worth it? Expert analyst Greg Reynolds takes a deeper dive. 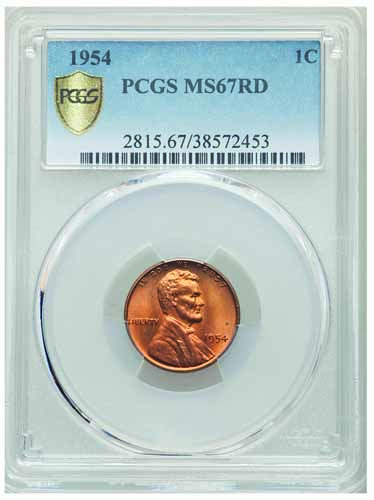 Lincoln cents are the most collected of all coins. These have been minted from 1909 to the present. This discussion is about the premiums paid for uncirculated Lincoln cents that are designated as having full original mint red color (“RD”) by PCGS or NGC.

In a vacuum, copper is naturally red. Exposure to oxygen and particular other elements results in toning. Copper tones faster than silver or nickel.

Before 1982 and except in 1943, all Lincoln cents were specified to be 95% copper. The composition of the other 5% was not consistent over time and really is a topic for a separate discussion. Lincoln cents dated 1943 were required to be struck on zinc coated steel planchets (prepared blanks). Of course, there were mint errors and other exceptions to the rules.

The moment after a 95% copper coin is struck, it will typically be bright red. At times during the first decade that Lincoln cents were minted, there were imperfections in batches of the alloy that resulted in some Lincoln cents having a bright yellow hue, a rich orange tint or a ‘woodgrain’ like appearance.

Among those that I have personally inspected, most or all of the pre-1934 Lincoln cents that are now dominated by magenta or faded pink colors were doctored. Most Lincoln cents minted in the past are brown in the present. Natural green, tan, russet and orange colors often develop. Although some blue tints are natural, many blue copper coins have been artificially toned.

Environmental variables affect the rate at which coins tone and the colors that develop. There are no full original mint red copper coins from ancient times. Almost all copper coins will turn brown, green or other dark colors, eventually. 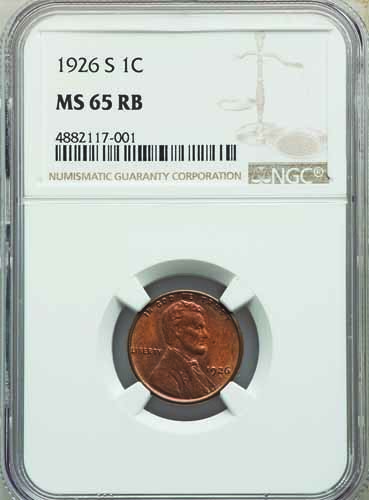 Most uncirculated, pre-1934 Lincoln and Indian cents are at least partly brown. Many are entirely brown or nearly so.

PCGS, NGC and CAC classify copper coins as being brown (“BN”), red and brown (“RB”) or full red (“RD”). For purposes of this discussion, all coins that are or were specified to be at least 95% copper are called copper, as there is no universally accepted, precise definition of the term bronze. Indeed, bronze is an inexact term that is often employed in a misleading way. Also, popular definitions of bronze overlap with some accepted definitions of brass.

If a coin is of a 95% copper alloy, then the original color of the coin was largely determined by its copper content. The extent to which zinc, tin or impurities affect color is a secondary issue, as all copper coins may naturally develop multi-colored toning if stored in ways that coin collectors typically kept coins during the 19th and 20th centuries.

For two Lincoln cents of the same date with the same numerical grade from the same grading service, there can be a huge difference in value stemming from color designations. This point may be illustrated with references to CPG® retail estimates for better date Lincolns from the classic era (before 1935 or so). 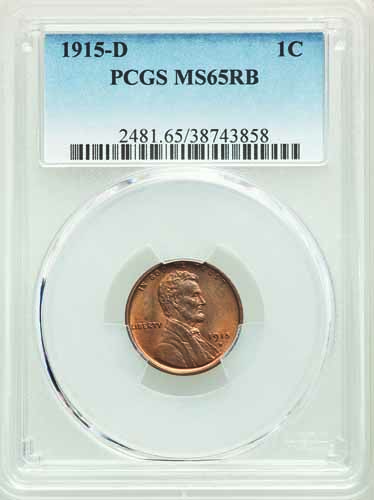 With so much money relating to a distinction between Full Red (RD) and Red & Brown (RB), it is fair to wonder about the dividing line. Is it unusual for the overall color of a Lincoln cent to be on the border between RB and RD?

There are coin doctors who transform brown or RB Lincolns into apparent red Lincolns and then submit them to PCGS or NGC with varying degrees of success. How often are doctored full red Lincolns mistakenly certified by PCGS or NGC?

Lincoln cents certified as Red & Brown are less likely to have been doctored than Lincoln cents certified as full red (RD). It is easier to change the color of a whole copper coin than it is to add a little red color or patches of red here and there. Coin doctors have more of a financial incentive to seek an unwarranted full red (RD) designation than a RB designation.

Collectors should think about the logic of paying large premiums for RD designations. Could a Lincoln cent that is 40% red, 25% medium brown, 20% green, 10% russet and 5% tan be more appealing than another of the same date that is 100% red or nearly so?

Market values for some certified full red (RD) Lincoln cents from the 1950s illustrate the extent to which some collectors have paid for RD designations. For most all dates from the 1950s, raw Lincolns that would qualify for MS65RB or MS66RB assignments may be found at small to medium size coin shows for less than $7 each, often for less than $2.50 each. I am not implying that these should be submitted to NGC or PCGS. I am emphasizing that most MS65 to MS66 red and brown Lincolns from the 1950s, except for mint errors, are common and usually cost from $1 to $8 each.

More than seventy-one million Lincoln cents were struck at the Philadelphia Mint in 1954. A few million may survive, thousands of which are uncirculated coins accumulated in rolls by coin dealers. Whole rolls were sold to speculators or investors. Some dealers broke up rolls to sell individual 1954 Lincoln cents to casual adult-collectors or to children.

During the 1960s and 1970s, it was very common for coin dealers to trade rolls of coins that were minted during the 1940s and 1950s. There were then a large number of speculators in BU rolls.

It might now be practical to buy a whole roll of uncirculated 1954 Lincolns and then enjoy sifting through them! According to the November 2020 issue of The Monthly Greysheet (Vol. III: No. 11, p. 32), the top-wholesale bid price for a brilliant uncirculated (BU) fifty coin roll of 1954 Lincoln cents is $23.

It is true that most collectors cannot easily acquire desirable coins for Greysheet Bid levels. There is a very realistic possibility, however, that a collector may buy such a roll for a price below $35, less than seventy cents for each brilliant uncirculated (BU) 1954 Lincoln.

To those collectors who seek gem quality Lincoln cents, the following pieces of advice come to mind. First, do not pay more than $9 for any Lincoln cent dated after 1935. These are extremely common, even in uncirculated grades. The 1955/1955 Double Die and other important mint errors are exceptions to this $9 rule. Second, carefully inspect coins. Note discoloration, hidden contact marks, hairlines and other imperfections. Third, learn to identify and appreciate the natural colors that develop on Red and Brown or Brown Lincoln cents, especially orange, green, apricot and tan hues. There are thousands of terrific, gem quality Lincolns that are not full red. Fourth, compose a collecting plan that is affordable, practical and enjoyable.

Subscribe to January 2021 edition of CPG Market Review for the industry's most respected pricing and to read more articles just like this.