Stack’s Bowers Galleries is excited to present a physical Lealana Bitcoin in lot 4151 of their November 2021 Showcase Auction. Graded SP-70 by PCGS, it is the very first bitcoin from the Lealana series to be certified by that service and will also be the very first piece of physical cryptocurrency offered in a major live auction. 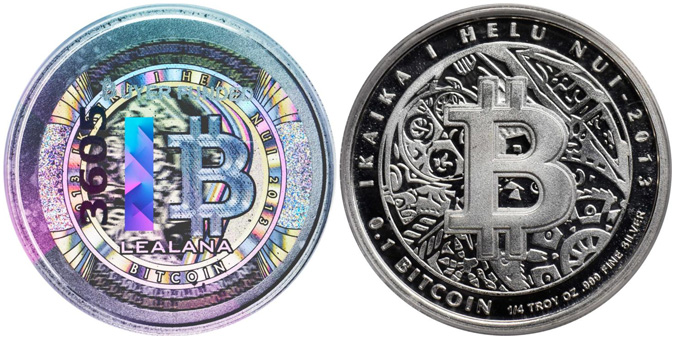 Costa Mesa, CA -- Stack’s Bowers Galleries is excited to present a physical Lealana Bitcoin in lot 4151 of their November 2021 Showcase Auction. Graded SP-70 by PCGS, it is the very first bitcoin from the Lealana series to be certified by that service and will also be the very first piece of physical cryptocurrency offered in a major live auction. It features an intrinsic face value, or “peel value,” of 0.1 Bitcoin (BTC), equivalent to roughly USD$6,500 at the time of publishing. With a current high-bid of $7,000 and two more weeks remaining before it crosses the auction block in Costa Mesa, California, enthusiasm among aficionados of cryptocurrency and traditional numismatists is strong for this new and exciting numismatic category.

This physical Lealana Bitcoin represents a historic revolution in commerce, similar to the first gold coinage issued by King Croesus circa 500 BC and the first U.S. coins to be struck by steam press in 1836. It is the physical manifestation of an entirely digital concept, offering a fusion of numismatic utility and financial technology.

First introduced as Lealana Litecoin, the Lealana series was released to collectors and investors in June 2013 as a counterpart to the Casascius physical bitcoins introduced in 2011. It was invented and issued by Noah Luis of Honolulu, Hawaii, who is perhaps better recognized within the crypto community by his internet handle “smoothie.” These physical Lealana Bitcoins were produced in both brass and silver compositions and issued in a range of denominations from 0.1 BTC to 1 BTC, corresponding to those of the Casascius series. Only 2,000 Lealana 0.1 Bitcoins were issued in silver, and this buyer-funded example with a black address is a great rarity, one of only 10 issued. It is considered part of the limited Series 1 Lealana coins, offered before the address color was changed to green in May 2014 to comply with regulations.

The value of this SP-70 (PCGS) coin was buyer-funded and remains unredeemed, further increasing its desirability. Issued on a 25mm planchet of ¼ ounce of .999 fine silver and minted by Northwest Territorial Mint, the obverse features a holographic sticker with the serial number at left and the public address visible through a rectangular window. On the reverse is the Bitcoin currency symbol at center surrounded by a legend listing the denomination, composition, and the Hawaiian phrase “IKAIKA I HELU NUI” that translates as “Strength in Numbers.” Also included with this physical Lealana Bitcoin is a Certificate of Authenticity (COA) and an encased Pretty Good Privacy (PGP) message.

Fierce competition among both collectors and investors is anticipated when the bidding goes live for this SP-70 (PCGS) Lealana 0.1 bitcoin in Stack’s Bowers Galleries’ November sale. For questions about this piece or to consign your physical bitcoins and other cryptocurrency to a future sale, please contact Stack’s Bowers Galleries at Consign@StacksBowers.com or call 800-566-2580.