The 1958 doubled die Lincoln cent is one of the greatest United States coin rarities of the 20th century, yet relatively few seem to know it as well as its 1955 and 1969-S doubled die counterparts that have long captivated the numismatic community. 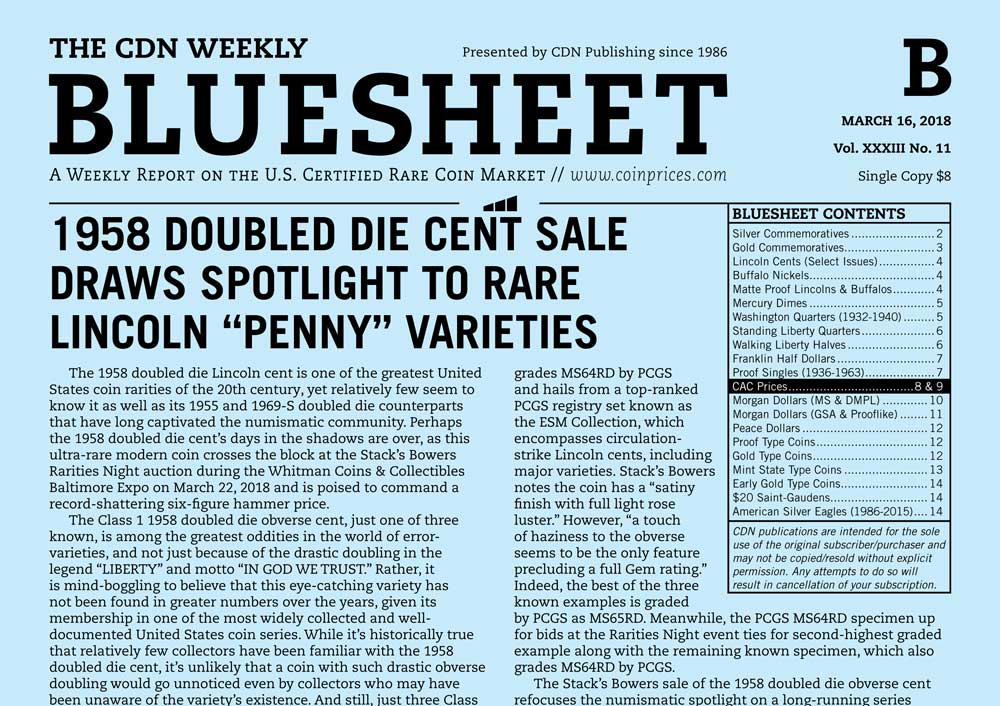 The 1958 doubled die Lincoln cent is one of the greatest United States coin rarities of the 20th century, yet relatively few seem to know it as well as its 1955 and 1969-S doubled die counterparts that have long captivated the numismatic community. Perhaps the 1958 doubled die cent’s days in the shadows are over, as this ultra-rare modern coin crosses the block at the Stack’s Bowers Rarities Night auction during the Whitman Coins & Collectibles Baltimore Expo on March 22, 2018 and is poised to command a record-shattering six-figure hammer price.

The Class 1 1958 doubled die obverse cent, just one of three known, is among the greatest oddities in the world of error-varieties, and not just because of the drastic doubling in the legend “LIBERTY” and motto “IN GOD WE TRUST.” Rather, it is mind-boggling to believe that this eye-catching variety has not been found in greater numbers over the years, given its membership in one of the most widely collected and well-documented United States coin series. While it’s historically true that relatively few collectors have been familiar with the 1958 doubled die cent, it’s unlikely that a coin with such drastic obverse doubling would go unnoticed even by collectors who may have been unaware of the variety’s existence. And still, just three Class 1 1958 doubled die cents have been confirmed in five decades.

According to PCGS, the 1958 doubled die obverse cent was originally discovered by a Philadelphia-area coin collector during the early 1960s. He submitted the coin to the United States Mint to verify its authenticity, and Mint officials declared the coin to be genuine. In the early 1980s, Errorama published a report on the coin. The variety was later listed in “The Complete Guide to Lincoln Cents,” published in 1996 by David W. Lange, who then confirmed just one specimen. During the same year as the release of Lange’s Lincoln cent book, the first third-party- certified specimen of the 1958 doubled die cent, graded MS64 RD by ANACS, sold for $25,025. Four years later, in 2000, that same specimen—which by then had crossed over to a PCGS slab with the same grade of MS64RD—garnered an astounding $57,500.

Since then, the 1958 doubled die cent has traded hands for upward of $100,000, securing its rightful place in an elite league of super rarities. The example crossing the block in Baltimore grades MS64RD by PCGS and hails from a top-ranked PCGS registry set known as the ESM Collection, which encompasses circulation-strike Lincoln cents, including major varieties. Stack’s Bowers notes the coin has a “satiny finish with full light rose luster.” However, “a touch of haziness to the obverse seems to be the only feature precluding a full Gem rating.” Indeed, the best of the three known examples is graded by PCGS as MS65RD. Meanwhile, the PCGS MS64RD specimen up for bids at the Rarities Night event ties for second-highest graded example along with the remaining known specimen, which also grades MS64RD by PCGS.

If the early bidding action for these coins is any indication of their final hammer prices, a few records could fall by the time the last lot crosses the block. Time will tell how strong final prices will be, but at least this much can be predicted before the auction: only a single savvy bidder with deep pockets stands to capture the 1958 doubled die cent. At what staggering price will that claim be made to one of the greatest numismatic rarities of our time?