DALLAS HERITAGE AUCTION SERVES UP THOUSANDS OF CLASSIC US COINS 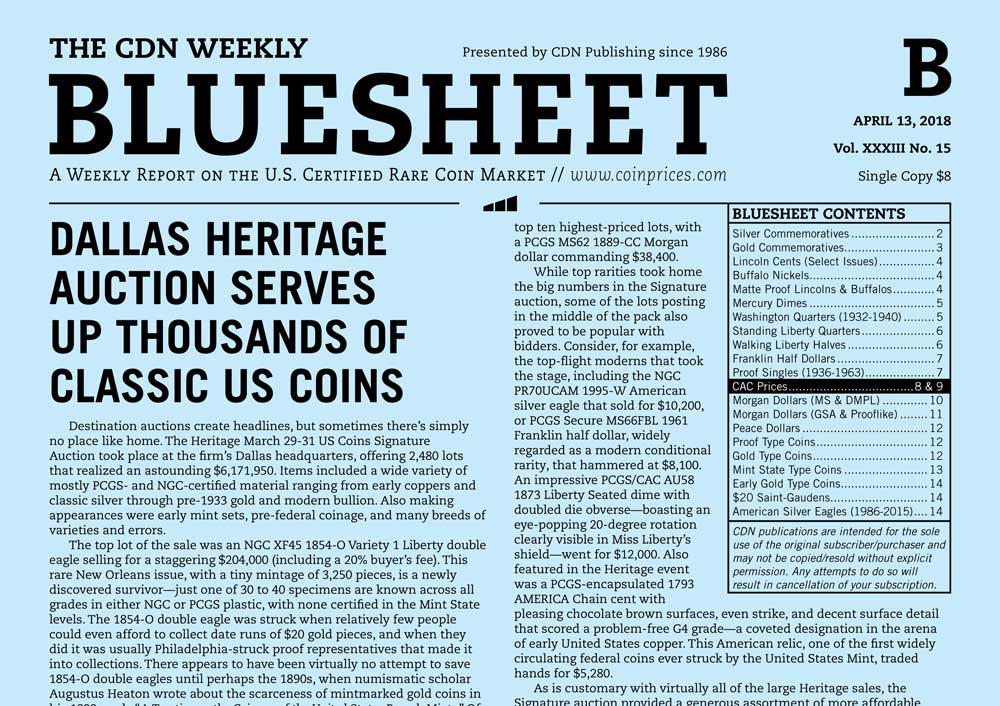 DALLAS HERITAGE AUCTION SERVES UP THOUSANDS OF CLASSIC US COINS

The top lot of the sale was an NGC XF45 1854-O Variety 1 Liberty double eagle selling for a staggering $204,000 (including a 20% buyer’s fee). This rare New Orleans issue, with a tiny mintage of 3,250 pieces, is a newly discovered survivor—just one of 30 to 40 specimens are known across all grades in either NGC or PCGS plastic, with none certified in the Mint State levels. The 1854-O double eagle was struck when relatively few people could even afford to collect date runs of $20 gold pieces, and when they did it was usually Philadelphia-struck proof representatives that made it into collections. There appears to have been virtually no attempt to save 1854-O double eagles until perhaps the 1890s, when numismatic scholar Augustus Heaton wrote about the scarceness of mintmarked gold coins in his 1893 work, “A Treatise on the Coinage of the United States Branch Mints.” Of course, by then 1854-O $20s had been accumulating wear through nearly 40 years of circulation.

Gold coins rounded out the rest of the top-three most-expensive lots in the Heritage Signature sale, with a PCGS/CAC PR66CAM 1881 $3 Princess and NGC MS66 1907 $20 High-Relief Wire Rim tying for second-leading price point at $66,000 apiece. The exceptional 1881 $3 proof boasts exquisite surfaces and lightly frosted devices, while the 1907 High-Relief Wire Rim $20 tantalizes with its thick, satiny luster and boldly struck surfaces.

While top rarities took home the big numbers in the Signature auction, some of the lots posting in the middle of the pack also proved to be popular with bidders. Consider, for example, the top-flight moderns that took the stage, including the NGC PR70UCAM 1995-W American silver eagle that sold for $10,200, or PCGS Secure MS66FBL 1961 Franklin half dollar, widely regarded as a modern conditional rarity, that hammered at $8,100. An impressive PCGS/CAC AU58 1873 Liberty Seated dime with doubled die obverse—boasting an eye-popping 20-degree rotation clearly visible in Miss Liberty’s shield—went for $12,000. Also featured in the Heritage event was a PCGS-encapsulated 1793 AMERICA Chain cent with pleasing chocolate brown surfaces, even strike, and decent surface detail that scored a problem-free G4 grade—a coveted designation in the arena of early United States copper. This American relic, one of the first widely circulating federal coins ever struck by the United States Mint, traded hands for $5,280.

As is customary with virtually all of the large Heritage sales, the Signature auction provided a generous assortment of more affordable picks. Several hundred lots were sold for under the $1,000 threshold. Among these was an MS63 1902-O Morgan dollar certified by NGC in a 1970s-era GSA cellophane pack that sold for $780. Also taking $780 was a PCGS AU53 1722 PENNY Rosa Americana Penny, UTILE, a private-issue coin authorized by King George I for circulation in North America. A final bid of $660 scored an uncertified first-year 1947 United States Mint double uncirculated set in original, unmarked cardboard panels —a scarce find surely pleasing to any diehard mint set enthusiast. Meanwhile, a likely well-traveled PCGS AU53 1875-CC Trade dollar with multiple chopmarks originating from Asian merchants cut a final bid of $483.60. A broadstruck NGC F2 1800 Draped Bust cent was a pleasant surprise as the least-expensive lot in the bunch, winding up in a lucky buyer’s hands for a $109.

All in all, the Heritage Signature sale delivered a plethora of exciting items for dealers and collectors across the economic spectrum. The numismatic diversity assured plenty of excellent acquisitions for virtually everyone, and robust bidding on many lots evidenced once more that dealers and collectors post respectable sums for scarce, high-quality coinage when they hit the marketplace.