The headlining auction at the American Numismatic Association (ANA) Money Show always promises something good for virtually everyone, and Kagin’s sale at the 2018 ANA Money Show in Irving, Texas, delivered in fine fashion. 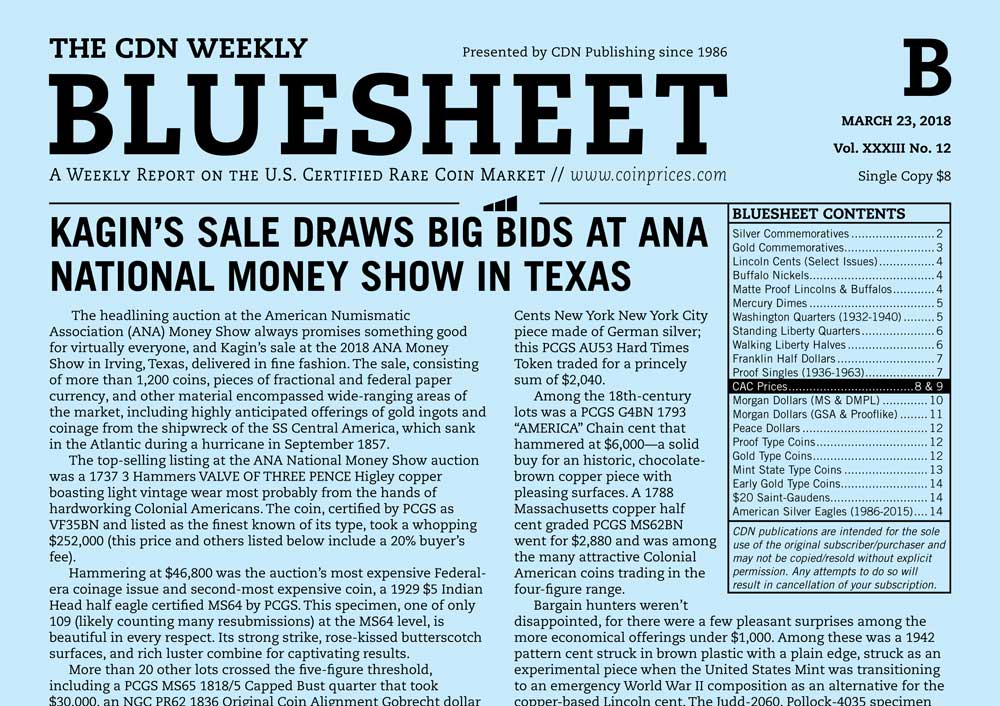 The headlining auction at the American Numismatic Association (ANA) Money Show always promises something good for virtually everyone, and Kagin’s sale at the 2018 ANA Money Show in Irving, Texas, delivered in fine fashion. The sale, consisting of more than 1,200 coins, pieces of fractional and federal paper currency, and other material encompassed wide-ranging areas of the market, including highly anticipated offerings of gold ingots and coinage from the shipwreck of the SS Central America, which sank in the Atlantic during a hurricane in September 1857.

The top-selling listing at the ANA National Money Show auction was a 1737 3 Hammers VALVE OF THREE PENCE Higley copper boasting light vintage wear most probably from the hands of hardworking Colonial Americans. The coin, certified by PCGS as VF35BN and listed as the finest known of its type, took a whopping $252,000 (this price and others listed below include a 20% buyer’s fee).

Hammering at $46,800 was the auction’s most expensive Federal-era coinage issue and second-most expensive coin, a 1929 $5 Indian Head half eagle certified MS64 by PCGS. This specimen, one of only 109 (likely counting many resubmissions) at the MS64 level, is beautiful in every respect. Its strong strike, rose-kissed butterscotch surfaces, and rich luster combine for captivating results.

Bidding was also enthusiastic for lots selling for less than $10,000, which included coinage from the SS Central America. Among the reclaimed treasures was an 1857-S Liberty Head double eagle, Dies 20F, No Serif, Right S with lustrous honey-gold coloring and a grade of AU58 by PCGS. $5,640. Another neat 1850s gold offering was a lustrous, honey-colored PCGS AU55 1855-S Indian Princess Head $3 that lured a final offer of $8,400.

A pair of 1893 Isabella quarters wowed fans of classic US commemoratives, with an NGC PR62 taking $3,600 and a PCGS MS63 commanding $1,110. Meanwhile, bidders with more novel tastes were enticed by a sharply struck silver 1939 Charbneau Golden Gate International Exposition California Pacifica So-Called Dollar, which sold for $1,440. Also of interest was an 1837 Feuchtwanger’s Three-Cents New York New York City piece made of German silver; this PCGS AU53 Hard Times Token traded for a princely sum of $2,040.

Among the 18th-century lots was a PCGS G4BN 1793 “AMERICA” Chain cent that hammered at $6,000—a solid buy for an historic, chocolate-brown copper piece with pleasing surfaces. A 1788 Massachusetts copper half cent graded PCGS MS62BN went for $2,880 and was among the many attractive Colonial American coins trading in the four-figure range.

Bargain hunters weren’t disappointed, for there were a few pleasant surprises among the more economical offerings under $1,000. Among these was a 1942 pattern cent struck in brown plastic with a plain edge, struck as an experimental piece when the United States Mint was transitioning to an emergency World War II composition as an alternative for the copper-based Lincoln cent. The Judd-2060, Pollock-4035 specimen certified as “Genuine, Broken—UNC Details” by PCGS sold for $408.

Variety specialists with smaller budgets had many excellent pieces to bid on, with a handsome AU55 example of the always popular 1937-D 3 Legs Buffalo nickel that attracted a final bid of $810 and PCGS MS65RD 1971 Doubled Die Obverse Lincoln cent that closed at $600. Fans of affordable early American copper didn’t go home empty handed. A 1787 Fugio copper New Haven restrike graded AU53BN in a PCGS holder went for $552, while a PCGS MS63RB 1723 Hibernia half pence crossed the block for $780.