One series that has received an extensive update this week is certified American Silver Eagles (ASE’s). Over the past decade or more, the ASE has become one of the most 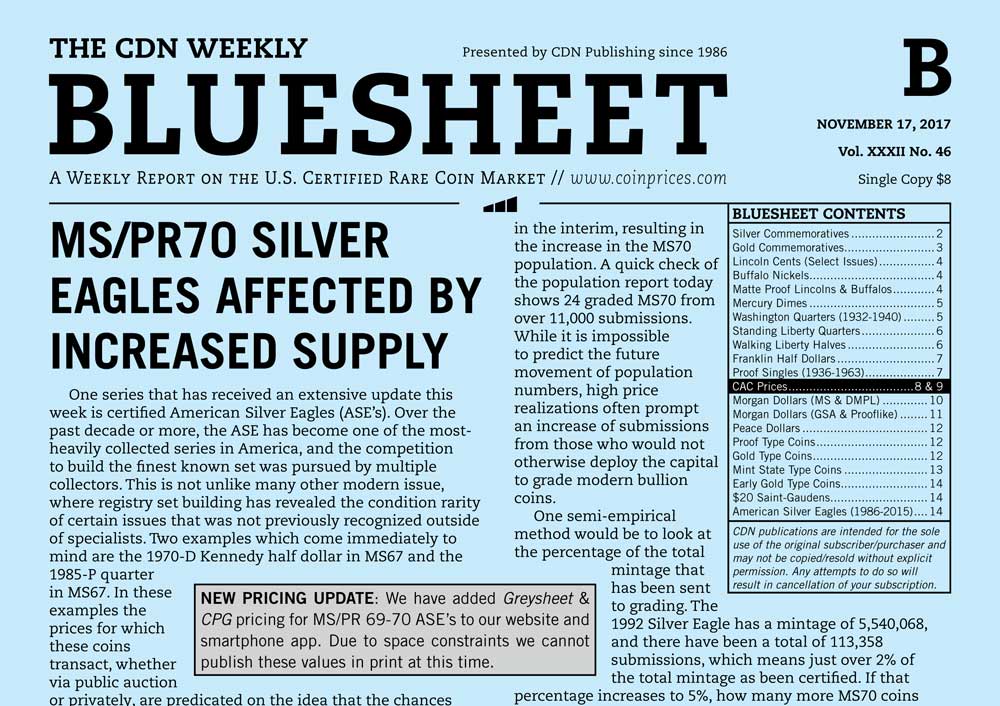 One series that has received an extensive update this week is certified American Silver Eagles (ASE’s). Over the past decade or more, the ASE has become one of the most-heavily collected series in America, and the competition to build the finest known set was pursued by multiple collectors. This is not unlike many other modern issue, where registry set building has revealed the condition rarity of certain issues that was not previously recognized outside of specialists. Two examples which come immediately to mind are the 1970-D Kennedy half dollar in MS67 and the 1985-P quarter in MS67. In these examples the prices for which these coins transact, whether via public auction or privately, are predicated on the idea that the chances of another coin receiving the same grade is quite small, especially when many thousands of coins have already passed through the grading services. In the case of Silver Eagles, we have seen negative price movement due to the increasing availability of MS/PR70 coins on the market. An example of this is the 1992 business strike: in January of this year a PCGS MS70 coin sold for $16,450 in the Heritage FUN auction. According to the catalog description, at that time there were three coins in this grade at PCGS. The most recent sale of a PCGS MS70 1992 Silver Eagle came in Heritage’s Long Beach sale in September where the price realized was $5,071. According to the catalog description, the population at the time was 17 coins.

It is possible that a pristine roll (or rolls) was submitted in the interim, resulting in the increase in the MS70 population. A quick check of the population report today shows 24 graded MS70 from over 11,000 submissions. While it is impossible to predict the future movement of population numbers, high price realizations often prompt an increase of submissions from those who would not otherwise deploy the capital to grade modern bullion coins.

One semi-empirical method would be to look at the percentage of the total mintage that has been sent to grading. The 1992 Silver Eagle has a mintage of 5,540,068, and there have been a total of 113,358 submissions, which means just over 2% of the total mintage as been certified. If that percentage increases to 5%, how many more MS70 coins might that yield? These are all factors that buyers will need to take into account when determining their bids for finest known modern coinage.

Additional price updates can be found in a our newly-added CAC pricing pages, with movement in Silver Commems, and the Indian gold series. There were more than 50 CAC stickered commems in the recently concluded Heritage Dallas sale, which is reflected here and in this week’s Greysheet.

We have also re-instated the GSA & Prooflike Morgan dollar prices (p.11) that were removed for a few weeks to accommodate the CAC pricing pages. Everything is back in place now and we apologize for any confusion in the interim.

We have added Greysheet & CPG pricing for MS/PR 69-70 ASE’s to our website and smartphone app. Due to space constraints we cannot publish these values in print at this time.