Big news for Virginia dealers comes just in time for the holidays! Back on February 22 of this year, VA Governor Terry McAuliffe signed VA HB 1668 to expand Virginia’s 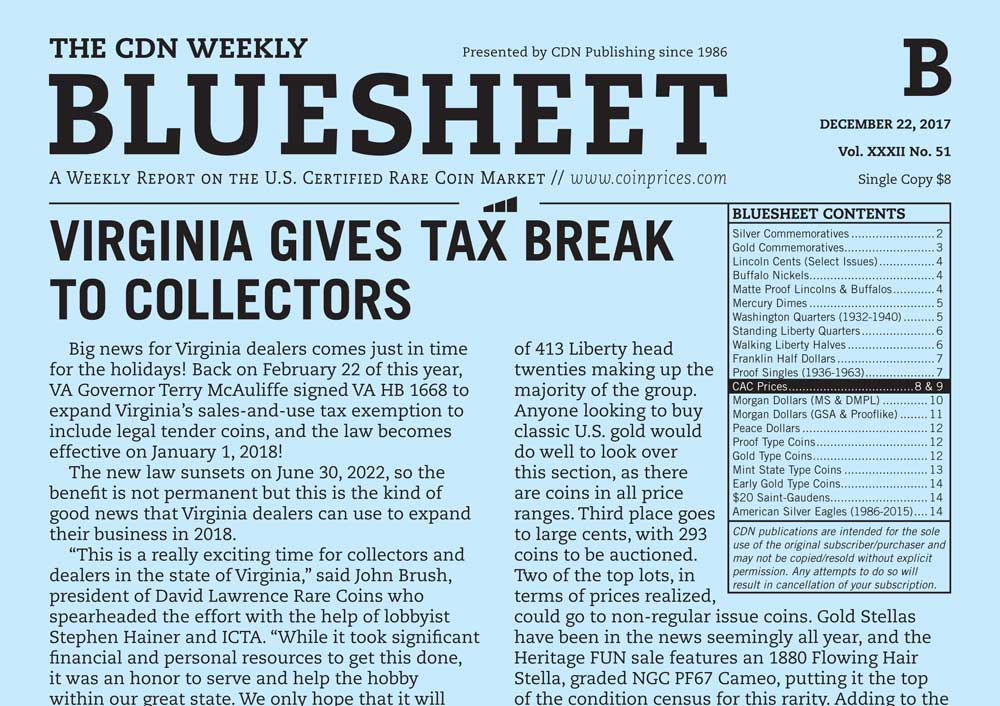 Big news for Virginia dealers comes just in time for the holidays! Back on February 22 of this year, VA Governor Terry McAuliffe signed VA HB 1668 to expand Virginia’s sales-and-use tax exemption to include legal tender coins, and the law becomes effective on January 1, 2018!

The new law sunsets on June 30, 2022, so the benefit is not permanent but this is the kind of good news that Virginia dealers can use to expand their business in 2018.

“This is a really exciting time for collectors and dealers in the state of Virginia,” said John Brush, president of David Lawrence Rare Coins who spearheaded the effort with the help of lobbyist Stephen Hainer and ICTA. “While it took significant financial and personal resources to get this done, it was an honor to serve and help the hobby within our great state. We only hope that it will have an overwhelming impact on all coin-related businesses in Virginia and that we’ll be able to host a national coin show in the not-too-distant future.” Read ICTA’s official news release in the January 29 Greysheet or at http://blog.greysheet.com.

LOOKING AHEAD TO HERITAGE’S FUN AUCTION

The Heritage FUN auction will offer dealers and collectors nearly 7,000 lots of certified United States coins for their buying pleasure. By category, Morgan dollars lead the way with 964 lots, unsurprising given the popularity of this series. Double eagles check in second with 624 lots, with a large group of 413 Liberty head twenties making up the majority of the group. Anyone looking to buy classic U.S. gold would do well to look over this section, as there are coins in all price ranges. Third place goes to large cents, with 293 coins to be auctioned. Two of the top lots, in terms of prices realized, could go to non-regular issue coins. Gold Stellas have been in the news seemingly all year, and the Heritage FUN sale features an 1880 Flowing Hair Stella, graded NGC PF67 Cameo, putting it the top of the condition census for this rarity. Adding to the appeal is that this example has been off the market since the year 2000. There is a good chance this will be the latest member of the $1 million club. The other is another pattern, an 1879 “Schoolgirl” silver dollar. From the years when the Mint was striking numerous patters, this dollar (Judd-1608) was designed by George T. Morgan, and one would be excused from wondering why this design was not chosen as the one that went into production. The FUN example is PCGS/CAC PR66 Deep Cameo, and is one of just 15 known of this pattern and is the finest known.