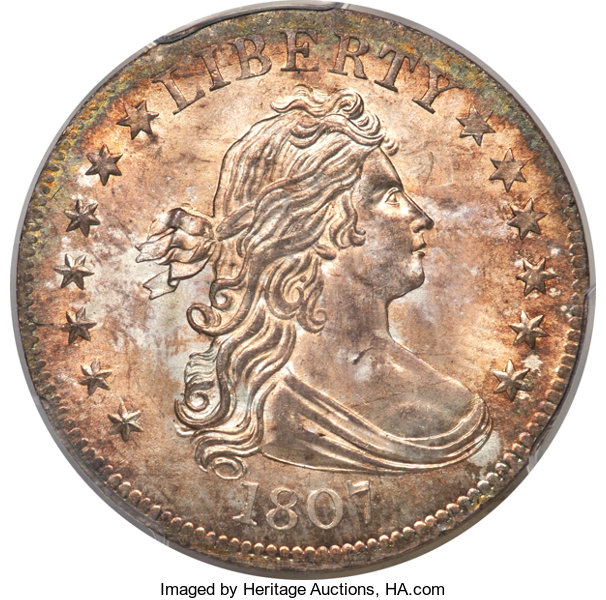 DALLAS, Texas (November 24, 2020) – Appearing at auction for only the second time in 113 years, a coveted 1807 Draped Bust quarter , the finest-known example of the type, Ex: Stickney-Clapp-Eliasberg, brought a record-breaking $630,000 from the Bob R. Simpson Collection at Heritage Auctions’ U.S. Coins Auction Nov. 19-22 in Dallas, Texas. The highly anticipated sale brought a cumulative $14,513,117, with highlights from the Simpson collection claiming all top lot honors.

“I feel very rewarded and humbled to see so many auction records,” Simpson said at the conclusion of the auction. “I remain grateful to Heritage for its effective marketing efforts and to the collecting community for responding with so much demand for these special coins.”

Prices from Part I and Part II of Selections from Bob R. Simpson’s collection have so far realized $23 million at Heritage, with Part III set to be offered Jan. 6-10, 2021.

In Dallas, Simpson’s collection offered several only-known and finest-known examples of the rarest in U.S. coinage. The sole Mint State example of a 1795 Small Head half dollar , MS63 PCGS, sold for a stunning $528,000. The coin is the only Small Head 1795 half dollar known in Uncirculated condition. It is believed to have been acquired directly from the Philadelphia Mint in 1795 by William Strickland, before returning with Strickland to England and eventually gracing the Lord St. Oswald Collection by descent. In recent years, the coin has acquired an equally impressive U.S. pedigree that includes the D. Brent Pogue and Bob R. Simpson collections.

A 1943-S cent struck on a bronze planchet , MS63 Brown PCGS. CAC, the iconic 20th century wartime rarity, ended at $504,000, after 47 bids, as collectors chased the finest of the six known San Francisco examples of this perennial favorite.

A 1795 Draped Bust, Small Eagle dollar , Centered Bust, B-15, BB-52, R.2, MS65+ PCGS. CAC, sold for $456,000. Exhibiting the strong break in the hair at eye level, just above and right of the hair ribbon, found on nearly all examples of the Centered Bust die marriage, the example is well struck, especially evident in Liberty's hair and on the eagle's breast. The highly lustrous silver surfaces are nearly flawless, with only a few light reverse adjustment marks.

An ultimate rarity among U.S. gold, Simpson’s 1912-S Indian half eagle , MS65, is the single finest graded at PCGS and the second-rarest date in Gem condition. A Gem Indian half eagle set is one of the most difficult collections to complete in the U.S. gold series, and the 1912-S is one of the biggest reasons for that difficulty. The reason for the 1912-S coin's rarity in MS65 is the fact that no high-grade pieces were set aside at the time of issue for numismatic purposes.

Selling for $300,000, Simpson’s rare and historic 1802 Narrow Date dollar , B-6, BB-241, R.1, MS65+ PCGS. CAC, offered collectors the finest example of the B-6, BB-241 die marriage and the sole finest 1802 dollar, regardless of variety, certified at either PCGS or NGC by the margin of the Plus designation. As an ideal type coin, it represents the best of the best of early American coinage. But it is so much more than merely representational. It survives in nearly pristine condition as a tangible souvenir from the United States Mint's formative period.

The single finest example known, an 1899-S ten dollar , MS68+ PCGS, CAC, brought $288,000. The captivating coin is perhaps the finest Liberty eagle ever offered by Heritage. This piece was purchased directly from the San Francisco Mint for face value at the time of issue.

Additional highlights from the auction include, but are not limited to:

Heritage Auctions’ next Signature U.S. Coins auction is Jan. 6-10, an event which will present Part II of the esteemed Donald G. Partrick Collection in a Platinum Night Auction, including a selection of the finest-known Brasher Doubloons.