Collecting these large cents by type is extremely easy. Such a type set requires just three coins and is an excellent way for beginners and budget-minded collectors to learn about and enjoy classic U.S. coins while spending very little money. A date collection, by contrast, is much more complicated and interesting. 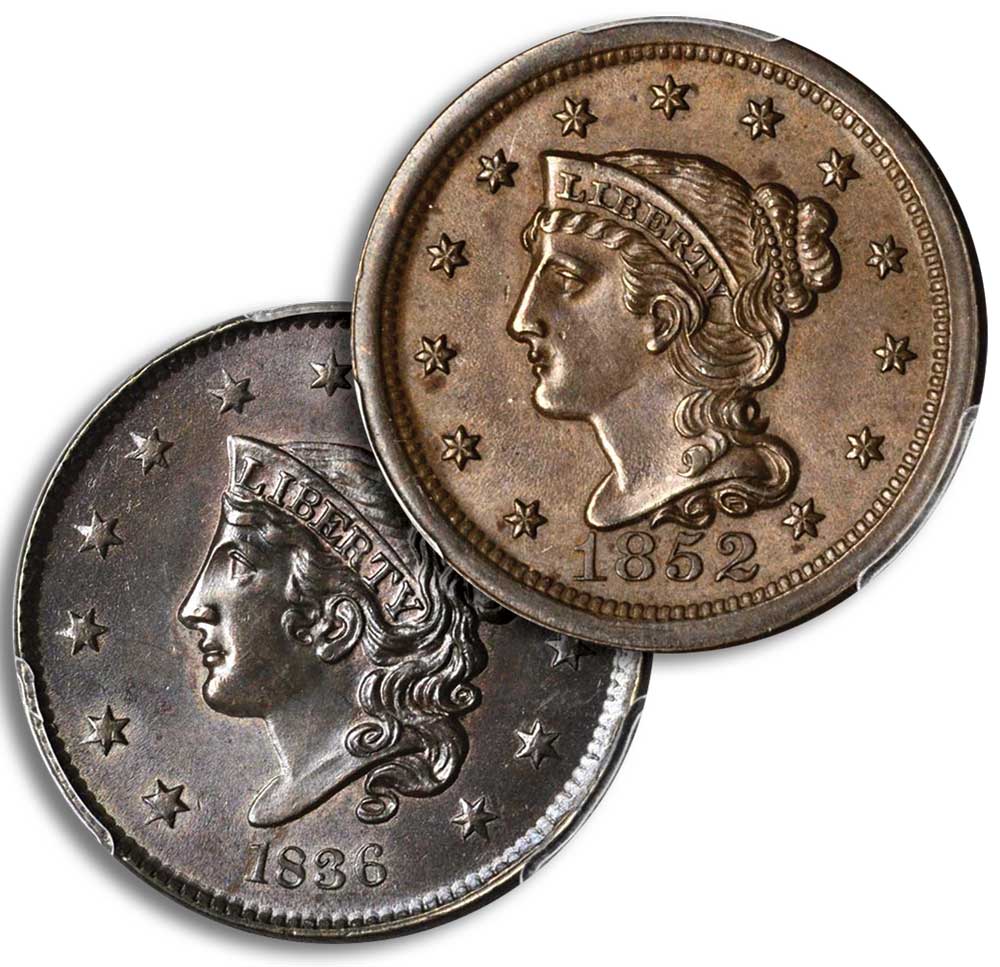 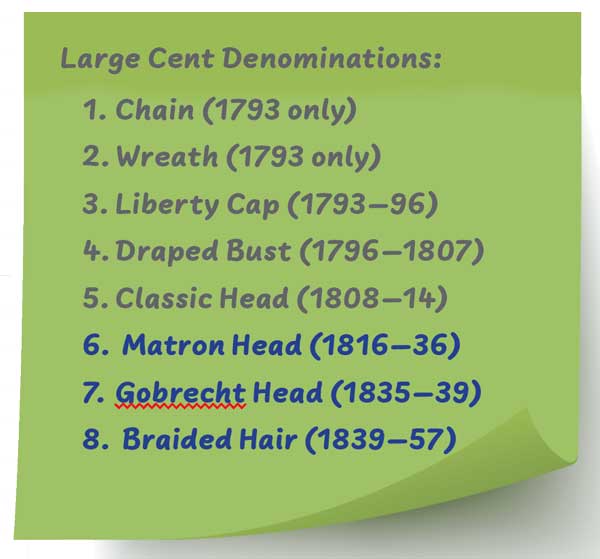 Collecting Middle Date (1816-39) and Late Date (1839-57) large cents ‘by type’ is extremely easy. Such a type set requires just three coins. This is an excellent way for beginners and budget-minded collectors to learn about and enjoy classic U.S. coins while spending very little money. Many type coin collectors later decide to collect one or more series ‘by date.’

Middle Date or even Late Date cents are sometimes called “Coronet Cents,” though this is a problematic term. At dictionary.com, the first three definitions of “coronet” are awkward in the context of the U.S. political climate, “(1) a small crown, (2) a crown worn by nobles or peers, (3) a crownlike ornament for the head, as of gold or jewels.” The definition of “coronet” in the Merriam-Webster dictionary (M-W.com) is not as royally laced, “(1) a small or lesser crown usually signifying a rank below that of the sovereign [monarch]; (2) a wreath or band for the head usually [worn] by women on formal occasions.”

The second M-W definition, while not explicitly linked to privilege by birth, relates to formal attire in Europe. In 1816, the “War of 1812” with Great Britain was still fresh in the minds of Americans, which included a brutal British attack on our nation’s capital. During the late 1790s, there had been severe political tension with France. Circa 1816, Americans were very wary of Europe.

A “coronet” is linked to symbols of nobility and privilege in Europe. Somehow, it just does not seem to be an appropriate name for large cents or other U.S. coins from the 19th century.

Perhaps it can be agreed that large cents dating from 1816 to 1836 are Matron Heads, largely because these appear to be motherly rather than depicting a goddess of liberty or a standard allegory regarding a female personification of Liberty. Is “Head of 1836” really a suitable name for large cents of the type struck from 1835 to 1839?

In regard to multiple denominations, especially dimes, Gobrecht’s designs were modified during the 1840s and/or 1850s such that they became artistically different from Gobrecht’s visions. This practice is somewhat analogous to the modifications of Saint Gaudens’ designs of eagles and double eagles by Charles Barber in 1907.

Even though Braided Hair cents were also designed by Gobrecht, “Head of 1836” large cents, which were minted from 1835 to 1839, should be called “Gobrecht Heads.” The Braided Hair name for the type minted from 1839 to 1857 is literally applicable, non-controversial, easy to remember, and has been widely employed for many decades.

A G4 grade Matron Head large cent could be purchased at a small to medium size coin show for less than $25. It is important to be careful in regard to buying raw Matron Head cents, as many of these would be considered non-gradable by most relevant experts. For Matron Head Cents that grade above VF25, it is a good idea to only consider coins that have been certified by PCGS or NGC.

Collectors should be advised that auction prices are sometimes wholesale prices, sometimes collector prices and often times fall around the wholesale-retail border. Collectors are also advised to consult experts about originality, toning, oiling, doctoring and conservation practices relating to large cents. It makes sense to begin by spending amounts that the respective collector regards as small sums of money, while learning and enjoying the process of building a collection.