CAC coins – certified coins that have been given a seal of approval by Certified Acceptance Corporation – are luring bidders at auctions. CAC-labeled coins have grown i 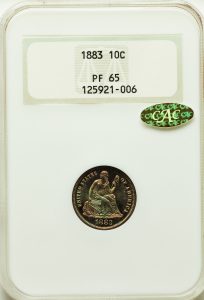 CAC coins – certified coins that have been given a seal of approval by Certified Acceptance Corporation – are luring bidders at auctions. CAC-labeled coins have grown in favor with dealers and collectors, who have long known that no two coins are exactly alike. This even goes for, say, two 1938-D Walking Liberty half dollars that are both graded by Professional Coin Grading Service (PCGS) with identical labels, from the same era, declaring each “Walker” as grading MS64. While both coins may be the “same” on paper, any seasoned numismatist who carefully examines both coins is certain to say that one of those two coins looks just a little better than the other. Maybe, even, he or she would say one of those coins looks a lot better than the other!

CAC was established by numismatic innovator and coin expert John Albanese, who co-founded PCGS in 1986, established Numismatic Guaranty Corporation (NGC) in 1987, and founded CAC in 2007. CAC, based in Far Hills, New Jersey, evaluates coins already certified and encapsulated by third-party graders (TPGs) PCGS and NGC and affixes a special bean-shaped labels; green stickers indicate a coin that is on the high-end of its labeled grade, whereas as the coveted gold sticker is bestowed to coins that are virtually certain to be undergraded, thus (usually) compelling the coin’s owner to resubmit it to a TPG for potential re-encapsulation at a higher grade.

Over the past decade, CAC has grown from a novel market concept to a highly regarded player in the certified coin industry. CAC coins are regularly trading for higher levels than similar, “unbeaned” coins, and the latest news on February 2018 auction results as reported by CAC backs this up.

Here’s a roundup of some highlights from February 2018 auctions, as reported by CAC:

Generally speaking, CAC coins have re-defined the TPG landscape, and the auction results as reported above are evidence of this. Of course, there is never a guarantee that a CAC-stickered coin will always get a higher price than one that does not carry the now-familiar green or gold CAC bean. If for no other reason, this would certainly be the case for an “ordinary” slabbed coin that might make an excellent candidate for a CAC label but simply has not yet been submitted to CAC. And, as many TPG coin buyers know, there are still some grossly undergraded coins out there lurking in auctions and on the marketplace that an astute buyer will spot – and for which he or she will eagerly bid – regardless of whether or not it has a CAC sticker.

At the end of the day, it’s safe to say that CAC coins have earned an important place in the marketplace, with many trading for premiums of 10% to 50% or more over similarly graded, un-stickered certified coins – an assertion that the latest sales data from CAC supports. Certainly many more CAC-stickered treasures await buyers. What will the next batch of CAC coin sales data tell us? Stay tuned…

One other bought , how about rotating over a 3 month period CAC for top coins series. Say Walkers January and every 3 months there after . This way all major series can be covered. Your thoughts?

Why not add CAC Walkers instead of Commems which take up 25-30% of space you allocated for CAC coins. I totally agree with your thoughts on CAC , you need to expand to 4 pages.