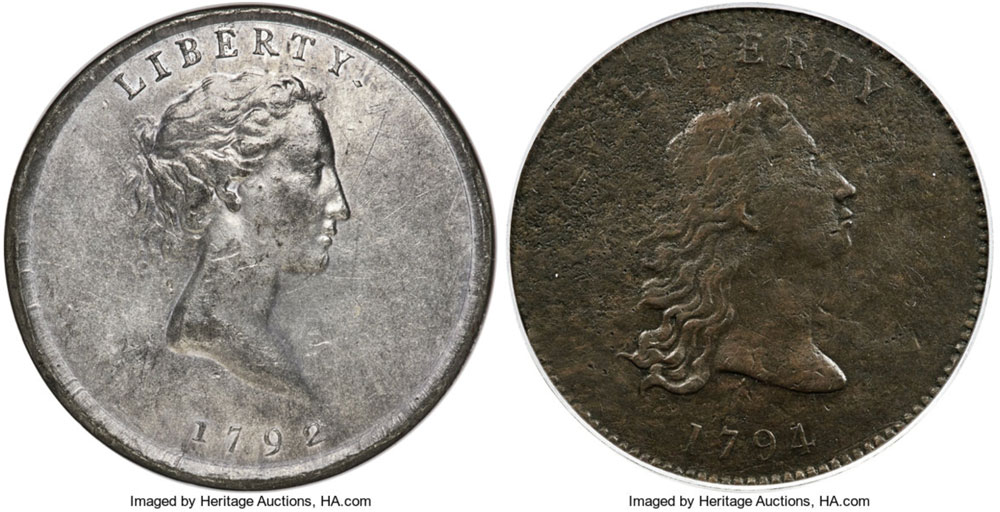 The sales offered more than 15,800 lots April 22-25 in Dallas where the auctions were relocated after the convention itself was cancelled.

“This was a season for numismatic history,” said James Halperin, Co-founder of Heritage Auctions. “It’s no exaggeration that this year’s auctions offered a once-in-a-lifetime selection for experienced collectors, the likes of which we may not see in a generation or more.”

Three coins broke the million-dollar mark. A 1792 quarter dollar, Judd-13, Pollock-15, High R.7 AU58 NGC, one of four known, sold for $1,260,000. The piece was put up for auction by the New-York Historical Society and was never previously offered for public sale.

The Simpson Collection also offered the 1794 No Stars Flowing Hair dollar in Copper, Judd-18, Pollock-27, Unique, VF25 PCGS, an experiment in copper widely considered to be the first dollar struck at the fledgling U.S. Mint, a prototype for silver dollars to come. It sold for $840,000, well above its $500,000 high estimate.

An extraordinarily rare 1793 Washington President Oval Peace Medal by Philadelphia silversmith Joseph Richardson, Baker 174 Unlisted, Belden 8-B, Prucha 31, Gilcrease 6.12, graded genuine by NGC, ended at $630,000 following 42 bids. A standout piece from the Partrick collection, it is one of the few surviving examples of the Washington engraved peace medal available outside of institutional settings.

Among the $5,591,888 in U.S. currency which traded hands during the one-day auction, several choice rarities were offered to collectors for the first time. A spectacular new discovery, the first reported Kansas City District 1928 $10,000 Note, PMG Very Fine 30, sold for $456,000, setting the world record as the most expensive small size note ever sold at auction.

The wonderful new entrant to the census of just 10 known 1928 $10,000 Federal Reserve Notes becomes number 11 and also adds another district to the known side of the ledger. Fortuitously for collectors, it is a pleasing, evenly circulated piece displaying good color and just honest wear.

A highly sought-after $5,000 1934 Federal Reserve Note , PMG Choice Uncirculated 64, in breathtaking condition, brought $168,000, the most expensive note of its kind ever sold at Heritage. These $5,000 and $10,000 notes are listed in the Top 100 Greatest United States Notes, and are highly regarded as trophies that serve as pillars in some of the best numismatic collections ever achieved. A second $5,000 1934 Federal Reserve Note, PMG Choice About Unc 58, from Dallas, sold for $144,000, also besting prices previously achieved for notes of its kind.

The finer of only two known, a 1255a Federal Reserve 10¢ Third Issue Hand Signed Green Back , PMG Extremely Fine 40, sold for $108,000. It took top lot honors among the 362-lot important Tabacco Family Collection.

The second uncut sheet of four notes, produced for the $1 1896 Educational Series , ended at $108,000. A penned courtesy notation along the bottom margin reads, "Issued July 23, 1896 Washington, DC 12:30 PM D(aniel) N. Morgan." Uncut sheets of large size type notes are all very rare and the desirability kicks up considerably when the notes are of an important personality note type. Morgan served as Treasurer of the United States from June 1, 1893 to June 30, 1897.

Heritage’s next Platinum Night sale is its May 6-7 presentation of World and Ancient Coins, followed by five, special online auctions throughout the month and featuring the Don Bonser Error Collection, Part 3.