The star of the Stack’s-Bowers Rarities Night was the Childs-Pogue 1804 silver dollar, which was first PCGS certified as Proof-68 in 1999. 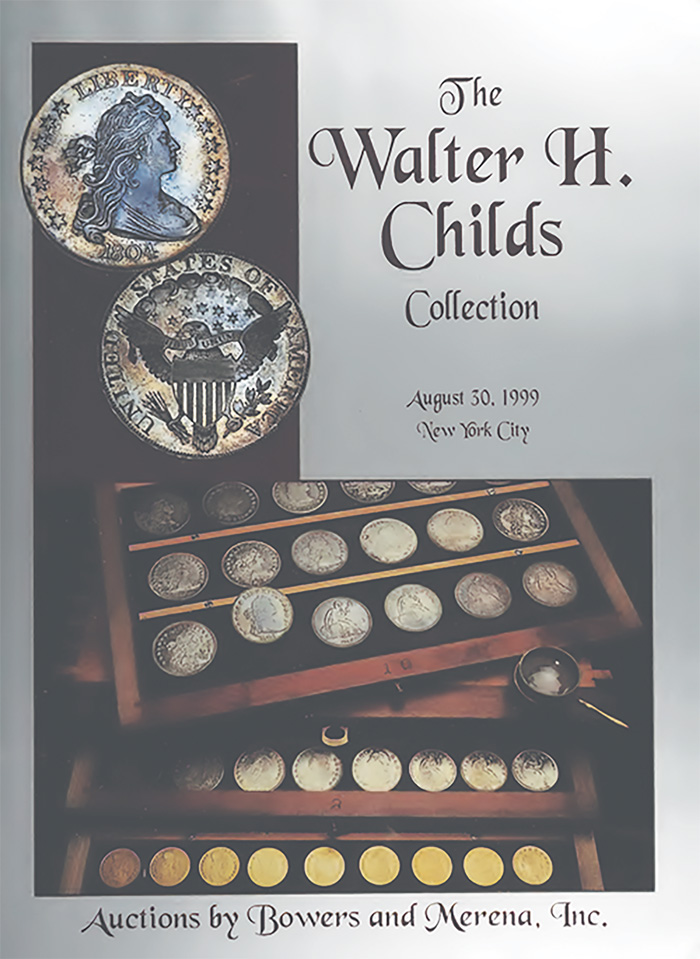 The Childs-Pogue coin shattered its own auction record for an 1804 silver dollar.

The Childs-Pogue coin shattered its own auction record for an 1804 silver dollar.

The star of the Stack’s-Bowers Rarities Night was the Childs-Pogue 1804 silver dollar, which was first PCGS certified as Proof-68 in 1999. An auction record for an 1804 dollar was set as this coin realized $7,680,000. Ian Russell, founder of GreatCollections, has publicly identified himself as the successful bidder, on behalf of a client.

The Stack’s-Bowers Rarities night was conducted on Tuesday, August 17, at this firm’s headquarters in Costa Mesa, California, not far from John Wayne Airport in Orange County. As far as I know, this was the first time that official ANA auctions were conducted during the week that followed the ANA Convention, which was held at the Stephens Convention Center in Rosemont, Illinois. The official auction firms brought all auction lots to the convention center for lot viewing sessions. 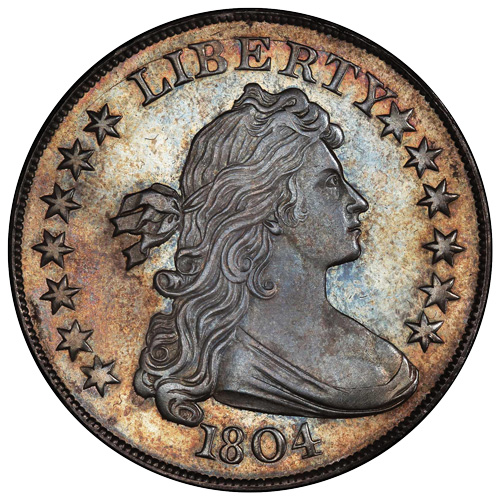 Does a policy of holding official ANA auctions after the ANA convention is over contribute to higher prices realized and less stress among the bidders who attended the convention? As there is so much to do, to talk about, to buy and to see at an ANA convention, it is not easy for all interested collectors and dealers to concentrate on auctions while they are involved in other coin convention related activities. Although it is logical for auction lots to be available at the convention, is it better for bidders and analysts to have days to rest and prepare before the auction sessions are held? Attendees must have enjoyed viewing and talking about the Childs-Pogue 1804 dollar.

References to the Stickney-Eliasberg-Miller 1804 dollar contribute to an understanding of the value of the Childs-Pogue 1804 dollar. They are both Class I 1804 dollars, meaning that they were struck in 1834 and/or 1835 under direct orders from President Andrew Jackson. Proof sets were assembled to be diplomatic gifts for foreign chiefs of state, especially monarchs in Asia (https://tinyurl.com/ProofBustDollars).

On April 8, 1997, the Stickney-Eliasberg 1804 dollar was auctioned by Bowers & Merena, also in New York city, for $1,815,000. The current CEO of Stack’s-Bowers, Greg Roberts, was the successful bidder. Roberts was then the CEO of Spectrum Numismatics, which later purchased Bowers & Merena in 2002 or early 2003 and bought controlling interest in the American Numismatic Rarities-Stack’s combination in 2011. The combined auctioned firm was named Stack’s-Bowers Galleries.

Market levels for rare U.S. coins were a little higher in April 1997 than they were in August 1999. Even so, there was no doubt in 1999 that the Childs 1804 dollar was worth substantially more than the Eliasberg 1804 dollar. In the sluggish market environment during the summer of 1999, I then figured that a medium price would have been in the range of $2.4 million to $2.7 million for the Childs 1804 dollar.

The Walter Childs Collection was exceptional. The auction was dramatic and lively. Great fresh material stirred bidders. Even so, the atmosphere at the Childs sale did not have the surreal aura that characterized the Eliasberg ‘97 sale, with incredible attendance, innumerable bidding wars and magical intensity. The $1,815,000 auction price for the Eliasberg 1804 dollar occurred in a very special setting and was then the highest price ever paid for a coin.

The record-setting $4,140,000 price for the Childs 1804 was astonishing in 1999. To the best of my recollection at the moment, the Pogues and Parrino were the only bidders active as the level surpassed $2.75 million. Although Brent Pogue and his father were present, David Akers acted as their representative for the final bid.

Parrino had owned many Great Rarities, though he never owned an 1804 dollar. Moreover, he liked to own the finest known representatives of rarities. It is generally accepted that the Childs 1804 dollar is the finest known. Parrino very much demanded it and the Pogues were then determined to build the best possible set of early U.S. silver dollars. 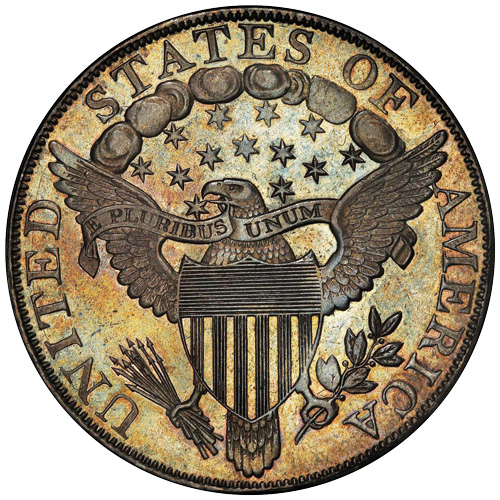 The Eliasberg 1804 had been auctioned by Bowers & Merena around twenty-seven months earlier. Twice the 1997 price for the Eliasberg coin is $3.63 million. The $4.14 million result for the Childs 1804 on August 30, 1999 was even $500,000 beyond twice the record-setting price that the Eliasberg 1804 realized in 1997. An immediate point is that, if an analyst reflects upon the previous auction price for the Childs 1804, it is important to keep in mind that it brought an extremely strong price in August 1999.

I hypothesize that the value of the Childs-Pogue 1804 dollar has not increased in 2021. Most of the increases in value for rare U.S. coins in 2021 are for gold coins and patterns of gold denominations. Indeed, the $7.68 million result is consistent with the market levels for it that I figured in May 2016. I was then paid by a prospective bidder to estimate its value. I devoted a lot of thought to analyzing the coin and its value.

Before the Pogue IV auction in May 2016 and before the Stack’s-Bowers Rarities Night in August 2021, I figured that this 1804 had the same fair collector price, a medium retail value of around $7.25 million. The $7.68 million result is notably above my estimate of a fair collector price, though this result is not a overly strong price. In 2016 and in 2021, I figured that $8.75 million would have been a very strong price. I am puzzled by remarks put forth by other coin professionals suggesting that this coin is or should be worth $10 million. While there have been some astonishing prices realized so far in 2021, most of the astonishing prices were for gold coins. 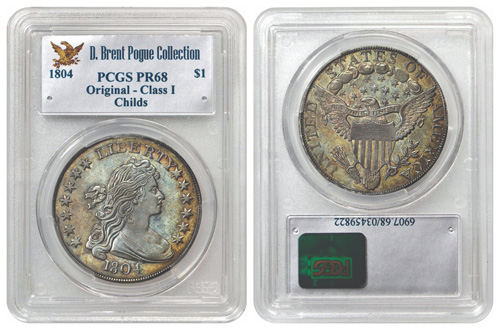 In my view, the $7.68 million paid for the Childs-Pogue 1804 dollar was a better value than the $7.2 million paid for the Norweb pedigree, Philadelphia Mint 1861 Paquet reverse double eagle, a distinctive die variety relating only to the reverse. When I was a kid, the three most famous U.S. coins were the 1913 Liberty Head nickel, the 1894-S dime and the 1804 silver dollar. It is extremely rare for a collector or a market analyst to mention a double eagle with a Paquet reverse. Although all 1804 dollars are famous, the Childs-Pogue 1804 is more entertaining than the others that have sold over the last dozen years.

The Childs-Pogue 1804 dollar features full, thick mirrored fields. Green tones dominate, though other colors are present, including russet and gray shades. The blue-green tones are enticing. On the obverse, there is a cloudy purple tint at the left, similar to a tone found on the ‘King of Siam’ 1804 dollar. There are orange-russet tones about stars #3 and #4. I remember seeing russet colors about the letters of LIBERTY in 1999, and these tones are still there.

On the reverse, different colors become apparent as this 1804 dollar is tilted under a lamp. Gray-blue, orange-russet and green tones are in multiple locations. Purplish areas probably relate to the plush case in which it was stored as part of an ‘1834’ Proof set.

The eagle has a russet tint and clearly glows. There was a cameo contrast on the reverse when this coin was struck.

There are a few hairlines and microscopic marks on the obverse. These were never very apparent. Additional toning and dust that landed over the last twenty years have obscured some slight imperfections. The colorful, mostly green, toning and overall appearance are very attractive, and the Proof characteristics are absorbing. I hope that the new owner enjoys examining this 1804 dollar as much as I have.

Subscribe to October 2021 edition of CPG Market Review for the industry's most respected pricing and to read more articles just like this.