Over the years, The United States Mint has issued a variety of products. Beginning in 1892 and more consistently starting in the early 1900s, the Mint issued a wide variety of commemorative coins to appeal to special interest groups. 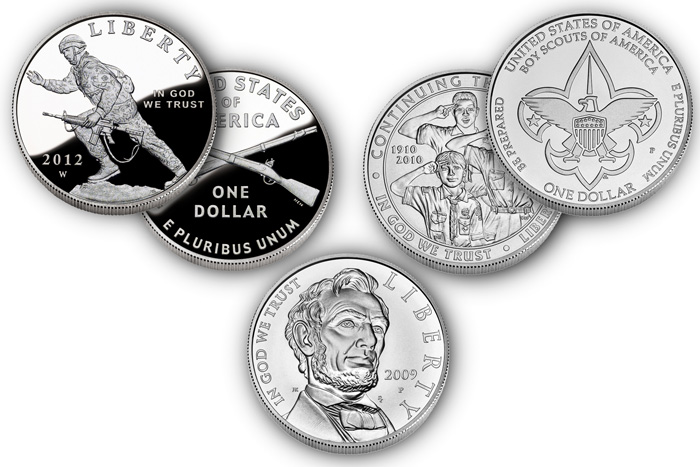 A set of US Commemorative Silver Dollars

A set of US Commemorative Silver Dollars

Over the years, The United States Mint has issued a variety of products. Beginning in 1892 and more consistently starting in the early 1900s, the Mint issued a wide variety of commemorative coins to appeal to special interest groups. Unfortunately, in the 1950s, collectors became disinterested in these coins, which resulted in very low mintages and low survival rates.

However, the United States Mint has come up with creative ways to issue these coins in various finishes and compositions. This increases the number of different coins that they can sell. Add to that the 50 State Quarters™ series, The America the Beautiful Quarters™, Presidential Dollars, First Spouse Coins, Gold Eagles, Silver Eagles, Proof Sets, Uncirculated Sets, medals, etc. and the number of unique coins and collectibles becomes overwhelming.

Given the vast number of modern sets and coins that are now issued by The United States Mint, it doesn't make economic sense for anybody to purchase one of every coin and set that is issued by the United States Mint. Additionally, the product packaging that the coins and sets come in is bulky. This would make it difficult to store your collection in a safe.

Therefore, it would be wise to formulate a strategy if you would like to collect contemporary U.S. Mint products. As the old adage goes, "Collect the coins you like." Concentrate in a particular area so you won't become frustrated with trying to collect a wide variety of coins offered by the Mint.

The products that the mint issues can be broken down into the following categories:

For many years the Mint has issued Proof sets and uncirculated sets. In the 1960s, these sets were highly sought after by collectors. More recently, collecting interest in these sets has waned. However, the Mint still sells approximately one million proof sets (both clad and silver) annually. Unfortunately, sales of uncirculated mint sets have fallen more drastically over the past few years.

Since the late 1970s, the issue price for most of these sets has exceeded their current value. Therefore, you should collect these sets for your own enjoyment and your heirs, not as an investment instrument. Additionally, since some of them have such a low cost on the secondary market, they make great gifts to attract young people into the coin collecting hobby.

More recently, the Mint has started producing special occasion sets such as the Birth Set and the Happy Birthday Coin set. These special sets contain a selection of proof coins from the current year.

As dictated by law, Congress can only authorize two commemorative coins to be minted per year. However, the United States Mint can choose various finishes and packaging options that can become overwhelming. The best strategy is to decide if you want to collect a particular denomination of each commemorative coin or all of them. Additionally, you need to decide if you're going to collect one specific finish or each finish available.

Circulating commemorative coins have been used extensively in other countries around the world. The United States entered into this realm big time with the 50 State Quarters Program™. This scheme has continued with The America the Beautiful Quarters™. Since these coins are also placed into circulation, it would be quite easy to assemble a set of these coins from your pocket change. This is another opportunity to introduce coin collecting to a young person.

In 1986 the United States entered into the production of bullion on investment coins. This initially started with one ounce Gold Eagle and a one-ounce Silver Eagle coin. More recently, platinum and palladium coins have been minted. Some of these coins are minted in mass quantities for investment purposes in uncirculated finishes. Others are minted in Proof and special finishes that are issued primarily for collectors.

Deciding which type of bullion coin you would like to collect really depends upon an investment strategy since most of the coin's value is derived from its intrinsic metal content. However, the proof coins that are issued for collectors may also carry a numismatic premium above the intrinsic bullion value.

United States Mint also issues commemorative medals for historical purposes. Several themes have evolved over time. This includes Bicentennial, historical events, humanitarian, cultural, military, presidential, and Treasury and Mint medals. More recently, the Mint has dramatically raised the prices on these metals. You can expect collector interest to fade in this area also.

I believe the Mint has gone too far--there are simply too many items commemorating too many things. Maybe I'm too much of a traditionalist, but I really only get interested in business strikes of circulating coins. No matter how many kinds of dollar coins are minted, this denomination still doesn't circulate well. (The US government should accept that the public generally prefers the $1 bill, so a polymer version of it should be produced by the BEP, and eventually for the higher denominations.) However, I guess the Mint does its best to bring in as much additional revenue as possible.

I started with the silver proof sets beginning 1999 because of the state quarters. The proof Eagle dollars are a nice addition. I have to agree that the commemorative coins are not of interest.