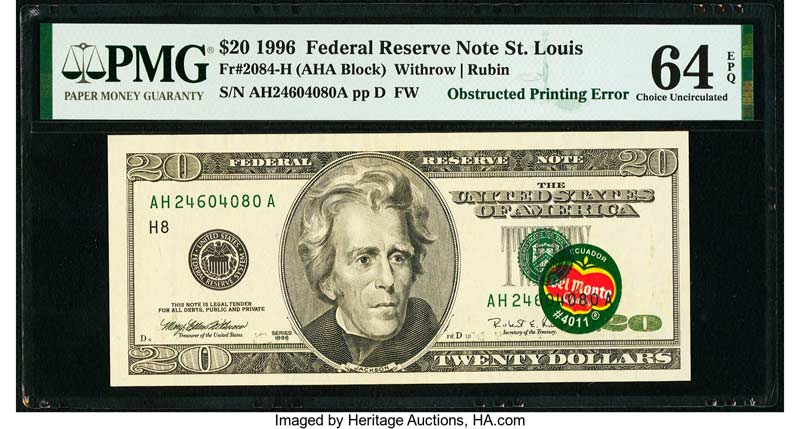 DALLAS, Texas (Jan. 22, 2020) – Collectors broke out into a banana bidding war Friday evening and pushed the auction price of a $20 bill featuring a Del Monte banana sticker to nearly $400,000 at a public auction of rare, U.S. currency held by Heritage Auctions.

The coveted banknote error sold to a bidder competing on Heritages’ live bidding platform, HA Live. Pre-auction bidding lifted the bids to $210,000. From there, the winning bidder outlasted a determined phone bidder and two other live internet bidders, to push the final winning auction price to $396,000. The price sets a world record for any error banknote ever sold. This was just the third time the note had been offered at public auction since its discovery in 2004.

“The Del Monte Note is considered perhaps the most famous of all U.S. error banknotes and now it holds a world record as the most valuable ever sold,” Dustin Johnston, Vice President of Currency Auctions at Heritage Auctions.

The obstruction caused a sensation among collectors of U.S. currency when it was discovered by an Ohio college student in the summer of 2004. The student received it as part of an ATM withdrawal and shortly thereafter posted it on eBay where it sold for $10,000. News of the note had barely hit the collecting community, however Heritage then offered the note at auction in 2006 and it sold for $25,300.

“Collectors immediately fell in love with it,” said “The placement of the ‘Del Monte Ecuador’ banana sticker is ideal because it covers part of the printing details and is overlaid by part of the Treasury Seal and the bill’s serial number.”

This isn’t the first U.S. bill to have an obstruction stuck on it during the printing process. Other objects include a Band-Aid, paper fragments, tape and wood shavings.

“There’s no telling if the sticker was affixed to test printing standards or just a prank by a worker,” Johnston said.