Numismatic researcher, Greg Reynolds, does a deep dive into the Rollo Fox set of Saint Gaudens double eagles sold by Heritage at the FUN show in January. Reynolds notes that the results were especially strong and surprising. 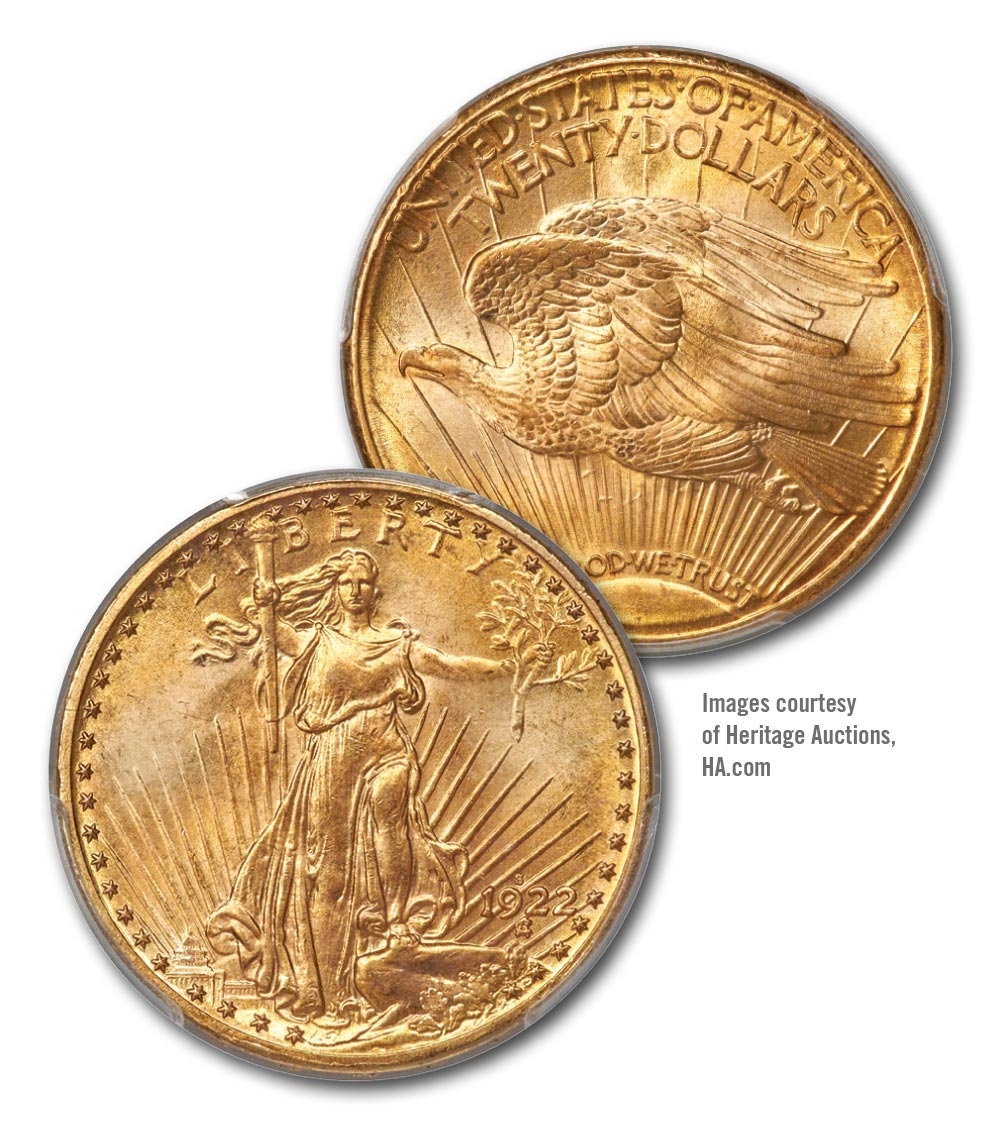 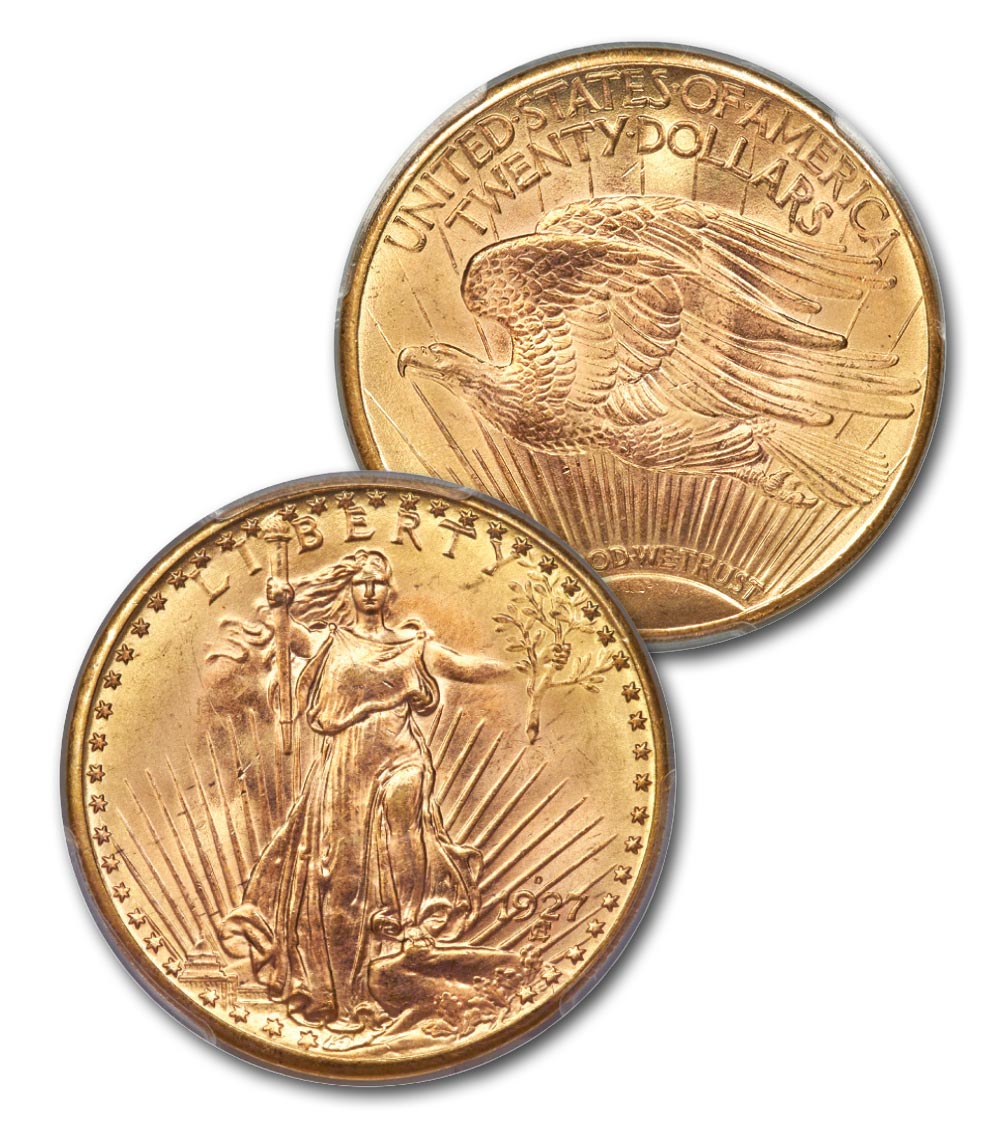 This 1927-D Saint Gaudens from the Fox Collection sold for $2.1 million at Heritage Auctions in January 2020

By far, the most exciting auction event over the last ten months was the sale of Rollo Fox’s set of Saint Gaudens $20 gold coins (Double Eagles) by Heritage on Thursday, January 9, at the Orange County Convention Center in Orlando, Florida, during the winter FUN Convention. This was the first set of high quality Saint Gaudens Double Eagles (‘Saints’) to be publicly auctioned since Dr. Duckor’s set was auctioned eight years earlier in January 2012, and the first set with a 1927-D Saint to be auctioned since “The Douglas Martin Collection” went ‘on the block’ in January 2014, also at a FUN Convention.

As there were more than fifty coins in Rollo Fox’s set, it is not practical to discuss all of them in one review. The focus here is on condition rarities from the 1920s that brought newsworthy prices. Mintmarked dates in the 1920s were highlights of this auction and are particularly interesting to discuss for additional reasons.

A ‘D’ mintmark refers to the Denver Mint and an ‘S’ indicates that a coin was struck at the San Francisco Mint. A Saint without a mintmark was minted in Philadelphia.

While there were some good deals for buyers in the auction of Rollo’s set, the 1922-S was not one of them. Rollo Fox’s 1922-S was PCGS graded MS65+ and CAC approved. In this case, the price realized is much more important than the individual coin. 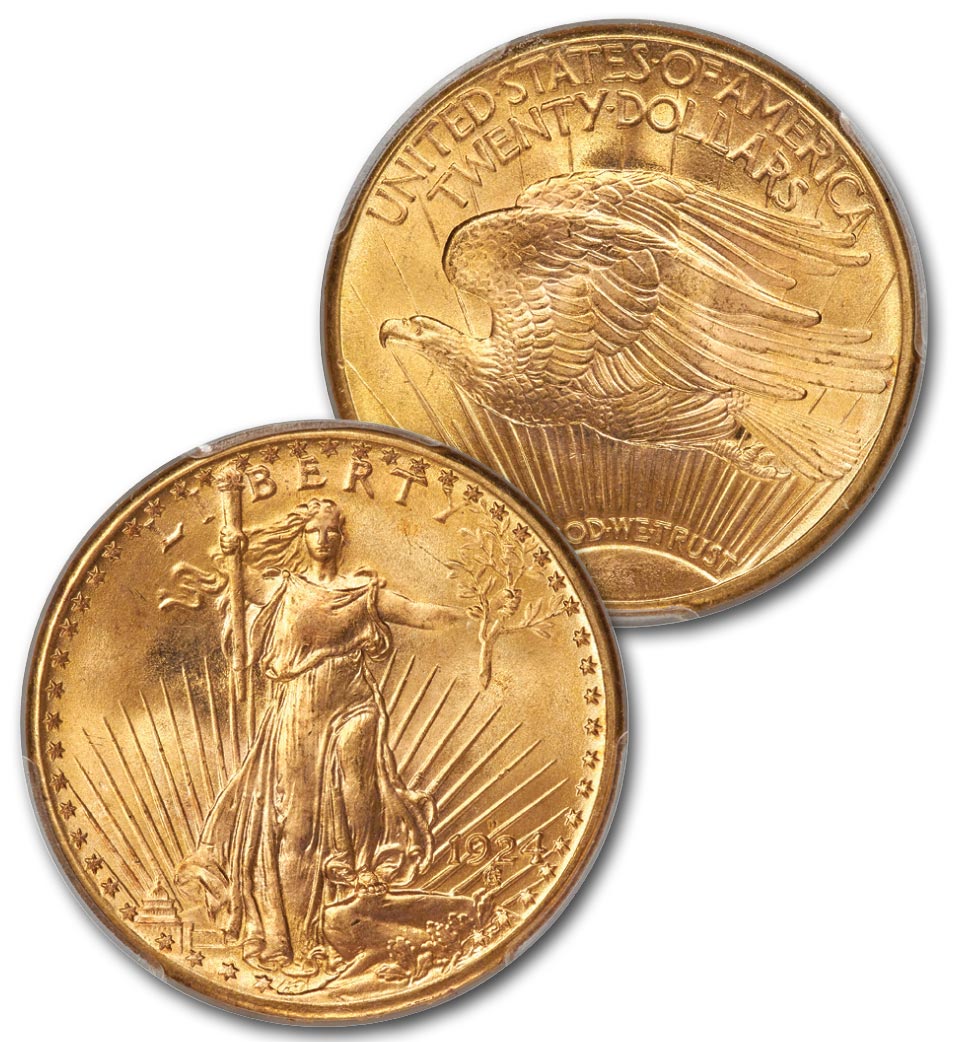 This 1924-D Saint Gaudens from the Fox Collection realized $93,000, in line with market expectations.

The combined total of grading assignments at PCGS and NGC for 1922-S Saints is over 2,250. Additionally, there are dozens of non-gradable 1922-S Saints around.

PCGS reports seventeen 1922-S Saints graded as MS65 and three, including this Fox Collection coin, graded as MS65+, along with two as MS66 and two more as MS66+. NGC reports thirteen as grading MS65 and three as MS66. CAC lists four at the MS65 level, including this coin, and two at the MS66 level. CAC experts ignore the plus aspect of plus grade assignments by PCGS and NGC.

In my view, the Rollo Fox 1922-S is not the best of the four that CAC has approved at the MS65 level. Should it have brought more than the CPG-CAC retail price estimate of $50,800? 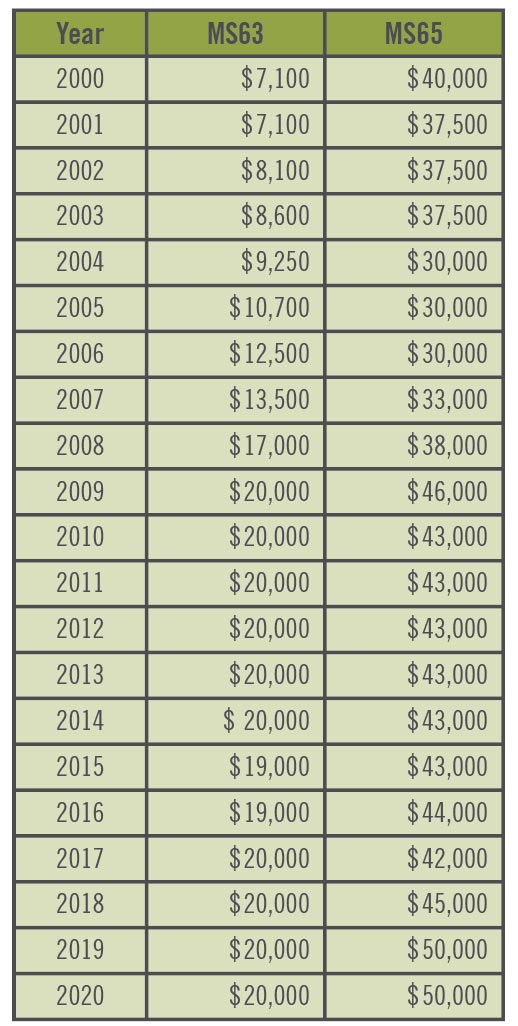 The CPG-CAC collector value estimate was $33,900. The PCGS price guide value is or was $37,500. I find these value estimates, however, to not be applicable to this specific coin. In the sale of Dr. Duckor’s Saints in January 2012, a CAC approved MS67+ 1928 brought $54,625, which was a very strong price, but $40,000 would not then have been a very strong price. Over the past three years or so, my communications with wholesalers and retailers suggest that a CAC approved, PCGS or NGC certified MS-67+ Saint of any date would realistically be valued at more than $40,000 at the retail level. I am not implying that buyers should pay this much for each one; I am reporting upon market realities.

The PCGS ranking of the Duckor-Fox coin as the sixth finest, privately owned 1927-D is not controversial, though I contend that the Duckor-Fox and McDougal coins are very close in terms of overall quality, while the Connecticut-Muller 1927-D is clearly above them. The three 1927-D Saints in the Smithsonian and the one in the museum of the Connecticut State Library are beside the theme of this auction analysis. No other 1927-D Saints are currently known. 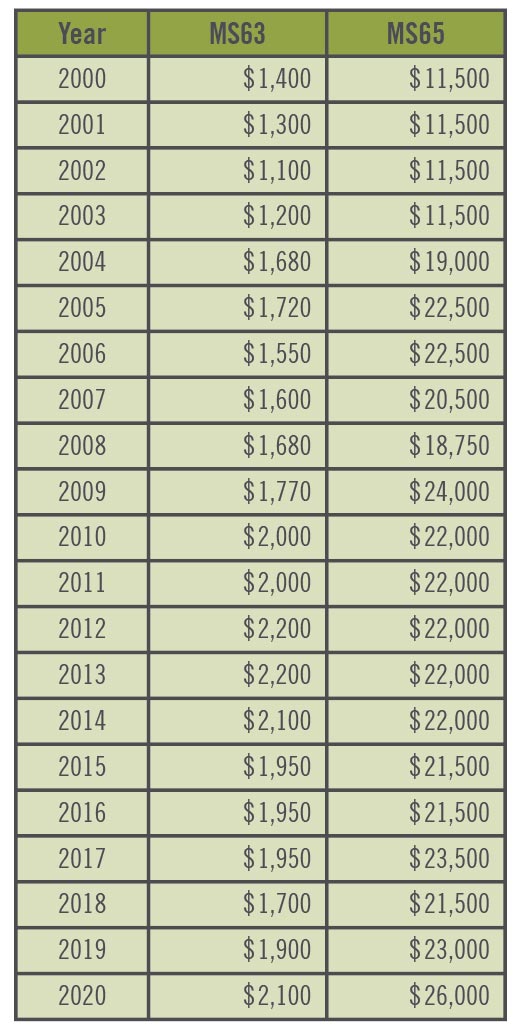 The Duckor-Fox 1927-D is a very attractive coin, the reverse especially so. Furthermore, collectors building complete sets of Saints generally seek coins that grade in the 65 to 67 range. The Duckor coin is the only gem 1927-D to have been publicly auctioned since the ‘Connecticut Library’-Muller 1927-D realized $1,495,000 in January 2010, also at a FUN Convention.

The spotlight on the 1927-D may cause people to overlook the 1927-S. The Kutasi-Brahin-Fox 1927-S is one of my favorite coins in Rollo’s set. Though nowhere near as rare as the 1927-D in absolute terms, the 1927-S is an important condition rarity and is considerably rare in all grades. I maintain that there are fewer than 250 in existence, likely less than 220. The population reports include some multiple counts of individual coins.

There are probably fewer than ten 1927-S Saints that truly merit grades in the MS65 to 67 range, gems. The Kutasi-Brahin-Fox 1927-S is PCGS graded MS66+ and CAC approved. In terms of current standards, the Kutasi-Brahin-Fox 1927-S really merits a 67 grade or its grade is at least in the gray area about the MS66 to 67 border. This was one of the greatest coins in Rollo Fox’s set. The wonderful eye appeal, originality and technical strength of this coin results in it being extremely impressive overall. 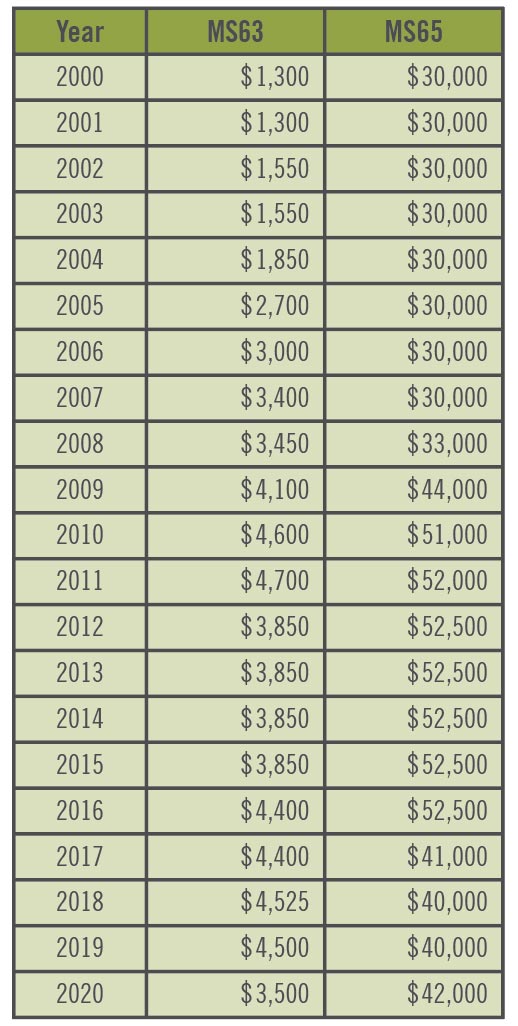 The reverse of the Morse-Brahin-Fox 1925-S, if it could be graded by itself, would merit a MS66 rating. The whole coin has
minimal imperfections. The obverse has a dipped or lightly conserved appearance, though is still attractive. While no expert would doubt that this is a gem quality coin, I tend to prefer a rich, medium orange-gold color of the kind that often characterizes gem quality mintmarked Saints from the 1920s. 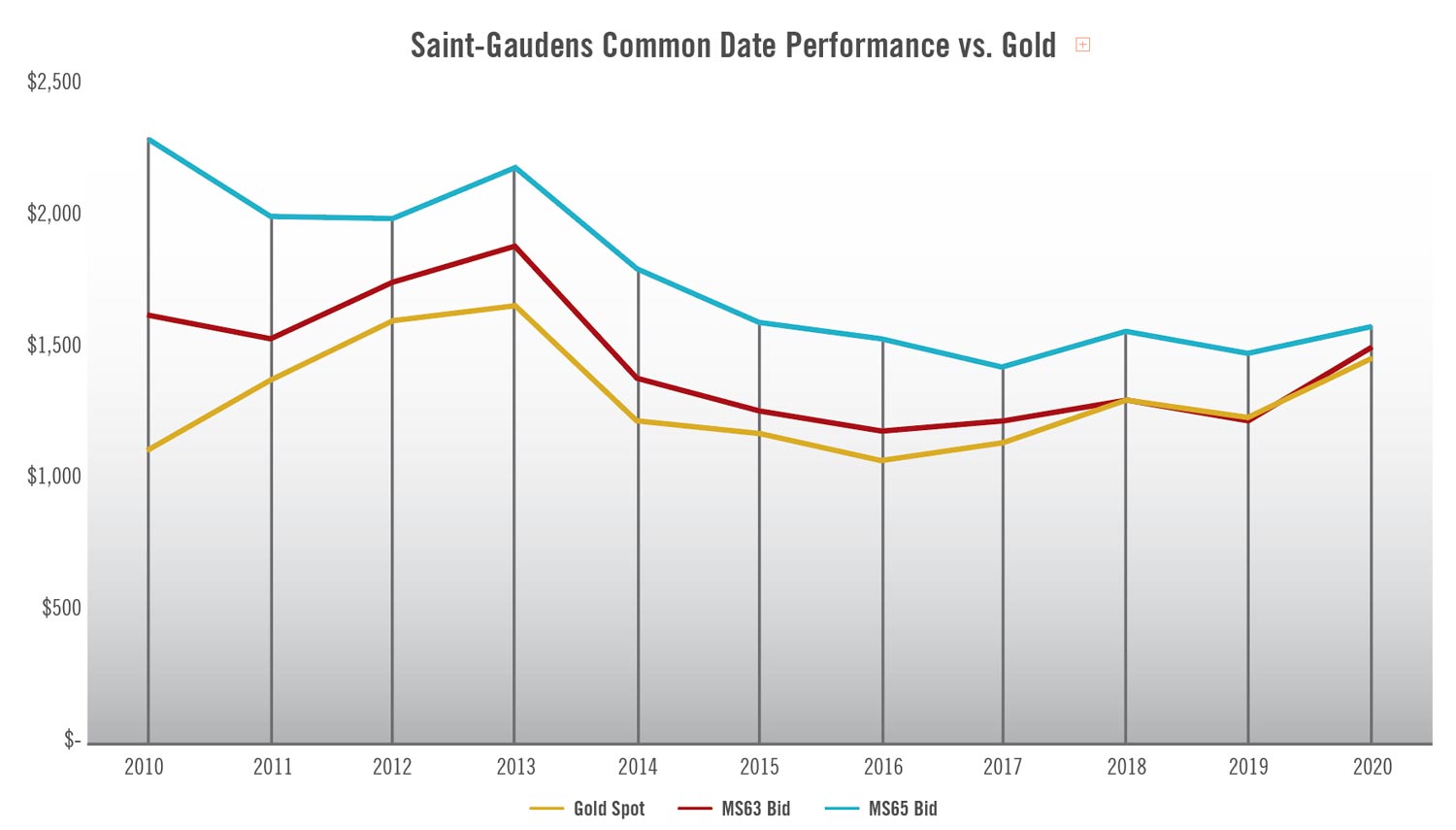 Although PCGS and NGC data added together indicates that 289 1926-D Saints have been graded, there do not exist even 275 different 1926-D Saints; maybe there are 235 around, including those that are non-gradable or in museums. CAC has approved just sixteen 1926-D Saints in all grades. It is interesting to compare the data for the 1926-D to the already mentioned 1922-S, for which PCGS and NGC have graded much more than 1,000 different coins and CAC has approved ninety in all grades.

This 1926-D was one of the most important coins in Rollo’s set and is much more desirable than several of the coins that sold for more. Indeed, Rollo’s 1926-D is much more attractive in actuality than it appears to be in published pictures.

In January 2010, a different 1926-D, the PCGS graded MS64 and CAC approved Muller Collection coin realized $83,375. The Muller coin was certified before PCGS assigned plus grades to any coin, and it might plausibly receive a MS64+ grade if resubmitted in 2020.

Before the auction, I was wondering whether there would be bidding war for Rollo’s CAC approved, PCGS graded MS65+ 1924-D, as it so difficult to find a gem 1924-D. While the $93,000 result for Rollo’s 1924-D is on target in the collector price range, this coin did not seem to generate as much excitement as several other Saints in Rollo’s set. The $93,000 result is much higher than past auction results for non-CAC and/or non-plus, PCGS or NGC graded MS65 1924-D Saints, but it was expected to be so.

The Rollo Fox 1924-D has very few contact marks and hairlines. Indeed, this coin is very impressive from a technical standpoint. Rollo’s 1924-D is close to meriting or does merit an MS66 grade. In my view, it is superior to the PCGS graded MS66, Carter-Morse-Duckor 1924-D that realized $138,000 in January 2012. Given the condition rarity of 1924-D Saints in gem grades, it is apparent that, if expert bidders in January 2012 were all that enthusiastic about the Carter-Morse-Duckor 1924-D, it would have then brought much more than $138,000, really a MS65 level price in 2012 for a coin that was certified as MS66.

The $93,000 result for Rollo’s 1924-D is an excellent value in the context of market levels for gem quality, mintmarked Saints dating from 1924 to 1927. Is anyone expecting a better 1924-D to be available in the not too distant future?

In some ways, bidding for mintmarked Saints provides clues regarding participation in this auction by collectors who are assembling sets of gem quality Saints. Indisputably, such collectors were active and serious. Many coins brought collector-level prices rather than prices between wholesale and retail; the results were notably higher than moderate prices or Greysheet Bid prices. Most competing dealers acquired zero Saints in Rollo’s set.

For quite a few lots, there were intense bidding contests. A few impressive coins, though, brought prices that were less than strong, and were good deals for collectors. While there were a small number of bargains, there were even more coins that realized extremely strong prices, well above market levels.

For decades, I have been analyzing auctions of rare date Saints. The sale of Rollo’s set was certainly successful. There was much enthusiasm and energy in the auction room. For the most part, prices were strong to very strong.