SBG has sold the famous coin to a private client for a price exceeding $4 million. This 1913 Liberty Head nickel ranks as the second finest of the five known, only three of which are in private hands. 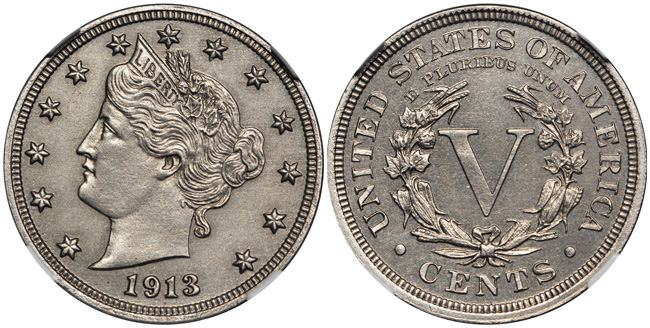 Costa Mesa, CA -- Stack’s Bowers Galleries has sold the famous Hawaii Five-O specimen of the 1913 Liberty Head nickel to a private client for a price exceeding $4 million. Recently on display at the firm’s table at the Long Beach Collectibles Expo in October 2021, this 1913 Liberty Head nickel ranks as the second finest of the five known, only three of which are in private hands. The other two are permanently impounded in the collections of the Smithsonian Institution and American Numismatic Association (ANA). Graded Proof-64+ by NGC and awarded a green sticker by CAC for superior quality, the Hawaii Five-O specimen is truly a numismatic treasure and Stack’s Bowers Galleries is honored to have assisted with a private client’s acquisition of this incredible jewel.

The 1913 Liberty Head nickel is among the most famous and prized of all U.S. issues and is regarded as the King of 20th Century coinage. It is, in fact, a coin that should not exist, as the Liberty Head series ended in December 1912 and was replaced in 1913 by the Buffalo design. It is not known exactly how the 1913 Liberty Head nickels were created, but the most popular theories suggest they were struck as a favor to a wealthy collector, struck to be exchanged for ultra-rare coins needed for the Mint’s own collection, or simply struck for the amusement of a Mint employee. Together with the 1894-S dime and the 1804 silver dollar, the 1913 Liberty Head nickel is considered part of the “holy trinity” of U.S. rarities. It is currently ranked #6 in 100 Greatest U.S. Coins (2019, 5th ed.) and was ranked #1 in an earlier edition. Each of the five surviving examples are historic treasures, though the Hawaii Five-O specimen is perhaps the most well known. 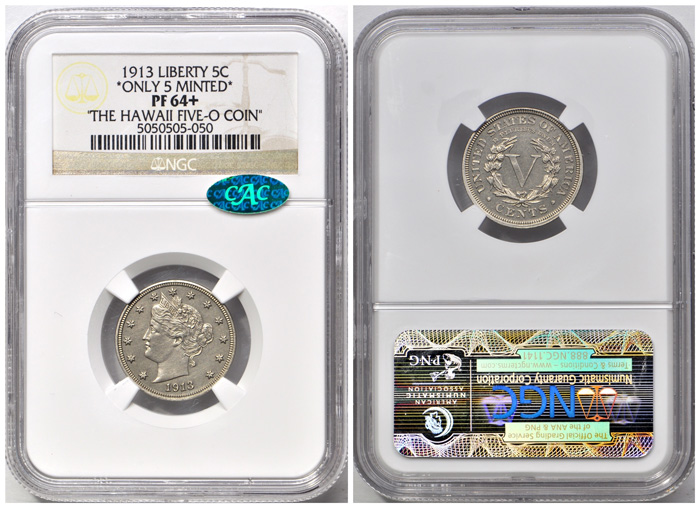 This nickel was featured in a December 1973 episode of the television show Hawaii Five-O, one of the most popular programs of the era. It was this episode, and this exact coin, that was responsible for making the 1913 Liberty Head nickel famous among non-collectors. However, even prior to its television appearance, this specimen had already amassed an extraordinary pedigree, one that can be traced back to the legendary collections of Colonel E.H.R. Green, Eric Newman, Fred Olsen, Los Angeles Lakers owner Dr. Jerry Buss, and King Farouk of Egypt.

A 1913 Liberty Head nickel has only been offered at auction on 15 occasions since the five coins were “discovered” around 1919, and Stack’s Bowers Galleries has a long history of handling these treasures throughout their 85-year legacy. The firm set a public auction record for a 1913 Liberty Head nickel with their sale of the Eliasberg example in 2018 for $4.56 million. This Hawaii Five-O specimen is also an old friend of the firm, as Stack’s Bowers Galleries sold it three decades ago in their 1993 Reed Hawn sale. Prior to this 2021 private sale, it was last sold at public auction in January 2014 for $3.29 million.

While Stack’s Bowers Galleries has been renowned as a leader in numismatic auctions for over 85 years, they can also claim an impressive record of private transactions involving world-class rarities that will never see a public offering. The sale of the Hawaii Five-O specimen is merely the latest milestone in this remarkable history. For questions about this 1913 Liberty Head nickel or for assistance buying or selling your numismatic treasures, contact the firm at 800-458-4646 or e-mail Info@StacksBowers.com. Stack's Bowers Galleries is also accepting consignments of U.S. coins and currency for their Spring 2022 Showcase Auction and their monthly Collectors Choice Online Auctions.