The 1795 Nine Leaves Ten Dollar, BD-3, R.6, MS63+ PCGS. CAC is the rarest and most popular of all the Capped Bust Right, Small Eagle tens. John Dannreuther calls this issue "the king of the Small Eagle type." 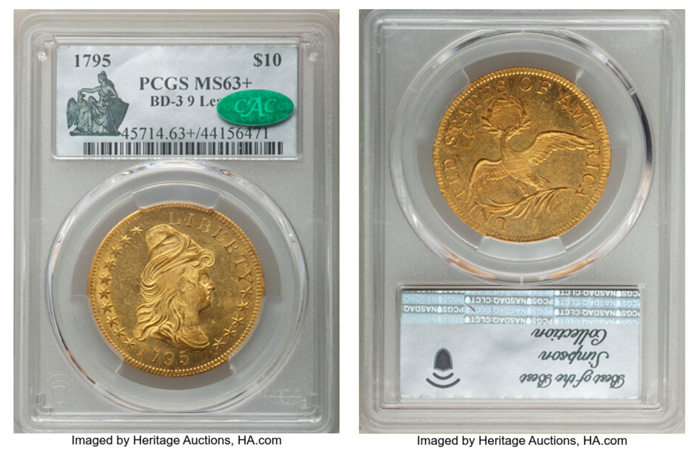 DALLAS, Texas – There is an adage in the oil and gas business about “going back to the well.” Simply put, as long as a well remains productive, why would anyone pack up and look elsewhere for oil?

That concept has served Bob R. Simpson and his clients well over the years. Long before he became part owner of the Texas Rangers baseball club, Simpson owned XTO, previously Cross Timbers Oil Co. If anyone understands the idea of going back to the well, it’s Simpson, who has assembled a coin collection ranked by Professional Coin Grading Service as one of the best ever amassed.

Also familiar with the concept of going back to a productive source are collectors of elite coins at Heritage Auctions, who will have a chance to acquire prizes from Simpson’s collection when they cross the block in the FUN US Coins Signature® Auction January 5-10.

The trove from the collection will be the seventh from Simpson’s collection. The first batch of Important Selections from The Bob R. Simpson Collection crossed the block at Heritage in September 2020.

“The same shrewd decision-making and savvy that made Bob such a successful businessman went into the years he spent assembling his exceptional collection,” Heritage Auctions President Greg Rohan said. “In business and in his passion for collecting numismatics, he made sound decisions based on extensive information and experience, which led him to build one of the finest collections ever assembled.”

The Simpson Collection produced nearly 130 lots in the auction. Highlights include, but are not limited to:

The 1795 Nine Leaves Ten Dollar, BD-3, R.6, MS63+ PCGS. CAC is the rarest and most popular of all the Capped Bust Right, Small Eagle tens. John Dannreuther calls this issue "the king of the Small Eagle type." Heritage Auctions is privileged to present the finest certified example of this important early gold rarity in this landmark offering. Whether the decision to have nine leaves on the branch on the reverse was an experiment or a die-cutting error is unknown; the fact that the branch had 11 leaves in the two subsequent years suggests it was, indeed, an experiment. The offered coin was acquired in 1989 by Mack and Brent Pogue, who made it the cornerstone of their collection of early eagles; at the time, the cataloger called it “a coin that towers head and shoulders above its competition.” The Pogues sold it at auction in 2015 for just over $1 million, shortly before it was sold to Simpson.

An 1863 Quarter Eagle PR66 Deep Cameo PCGS. CAC. JD-1, R.6 is from a classic issue with a reputation that reaches beyond collectors of prized 19th-century gold proof coinage. The quarter eagle was only struck in proof format in 1863, to the extent of just 30 pieces. Of that miniscule total, the offered example is among the finest survivors, certified at the PR66 Deep Cameo level by PCGS – a grade reached by only one other submission.

Struck from perfect dies that were engraved by Robert Scot, a 1796 Quarter B-2, R.3, MS66 PCGS is one of a total mintage of 6,146 pieces that was spread out over four deliveries from April 1796 to February 1797. This extraordinary Premium Gem example was one of the early strikes from the B-2 die pair, and appeared first in the 1796 quarter dollar emission sequence. This example ranks third-finest in the Rea-Koenings-Haroutunian Condition Census, and it matches the plate in the 1956 New Netherlands catalog, which says this piece is from the B. Max Mehl sale of the Ten Eyck Collection in 1922. The same has been said about another coin; it is impossible to declare with certainty which was from the Ten Eyck Collection.

Once a part of the collection of King Farouk of Egypt, an 1838 Gobrecht Dollar Name Omitted, Judd-88 Restrike, Pollock-98, R.8, PR64 PCGS is one of just three known examples, all of which come from the same die state. Henry R. Lindeman was a Mint Director whose collection was offered at auction after he died in 1878. What was not known until much later was the fact that he created, or allowed others to create, exotic numismatic rarities during his tenure as Director – a list that included the Judd-88 Gobrecht dollar, which was struck in April 1869, during the final days of his first term. Of the three known examples, one is the Dr. Korein coin now permanently housed in the ANS, making this offered example one of just two available to the public.

The finest known example – by two full points – of the 1861 Half Eagle PR66 Cameo NGC. JD-1, R.7 is from the rare issue of which Jeff Garrett and Ron Guth suggest fewer than 10 survivors remain. Despite the reported mintage of 66 pieces, the 1861 Liberty half eagle is just as rare in proof format as many gold proof issues of the 1860s with even smaller production totals. Of the six coins known to Heritage Auctions experts, one is in the National Numismatic Collection at the Smithsonian Institution, and another is in the collection of the American Numismatic Society.

The 1796 Quarter Eagle No Stars on Obverse, BD-2, R.4, MS62+ PCGS. CAC is one of the most sought-after U.S. gold types ever struck, and the only Draped Bust issue in the U.S. gold series without obverse border stars. Why border stars were omitted is not entirely clear, although many numismatic scholars suggest the decision was influenced by the Mint’s transition from punching one star for each state in the Union to punching just 13 stars, representing the original 13 colonies. Whatever the reason, the 1796 No Stars quarter eagle is arguably the most distinctive early gold issue in U.S. numismatics.

An 1874 Bickford Ten Dollar, Judd-1373, Pollock-1518, R.8, PR65+ Cameo PCGS . Ex: Simpson is one of only two known examples of the coin that is among the rarest, most valuable and mysterious issues in all of numismatics. The coins were unknown to the numismatic community until they were listed in United States Pattern, Trial, and Experimental Pieces, by Edgar Adams and William Woodin, in 1913, and even after they were discovered, the coin's origins remained shrouded in mystery. Neither of the coins was offered publicly until 1979, so the issue remained out of sight, out of mind for even the most dedicated pattern collectors until recently.

An 1879 Washlady Quarter Dollar, Judd-1596, Pollock-1786, R.8, PR63 PCGS reportedly has traded privately several times over the last century; the most famous transaction landed it in the possession of Waldo Newcomer and exhibited at the ANS by pattern expert William H. Woodin in 1914. It later was owned by Major Lenox Lohr and offered in 1960-61 for $475, and has been unavailable since it was last offered through Heritage Auctions 16 years ago.

An 1839 Gobrecht Dollar Name Omitted, Judd-108 Restrike, Pollock-121, R.8 PR64 PCGS is believed to be one of just three known examples of the coin struck in April 1869 at the end of Henry Linderman’s first term as Mint Director. Examination of the Starry Reverse Cabinet Coins suggests that the Judd-108 was struck closer to the end of the striking period than the previously mentioned Judd-88.

For images and information on all lots in the auction, visit HA.com/1341