On Sunday, August 29, 2021, GreatCollections reported that they sold the finest known 1893-S Morgan silver dollar in an online-only auction for $2,086,875. This coin was PCGS graded MS67 before 2005 and CAC approved in 2008. The result is a public sale record for any Morgan silver dollar. 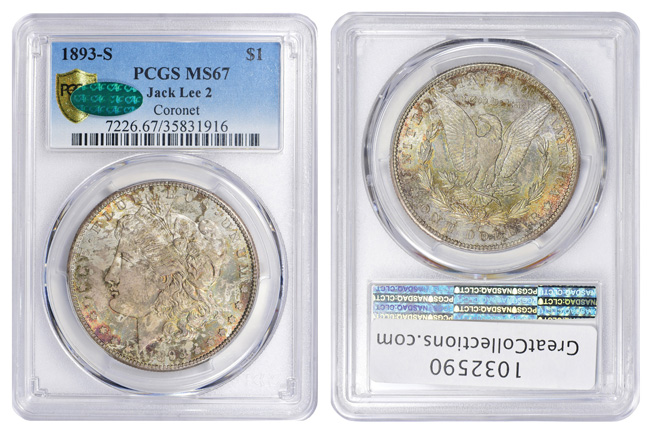 On Sunday, August 29, 2021, GreatCollections reported that they sold the finest known 1893-S Morgan silver dollar in an online-only auction for $2,086,875. This coin was PCGS graded MS67 before 2005 and CAC approved in 2008. The result is a public sale record for any Morgan silver dollar.

This 1893-S Morgan has a more interesting history than most million dollar coins. For many decades, it was held by the Vermeule family. Morgan dollar enthusiasts were unaware of its existence until Stack’s (NY) announced that it would be auctioned in September 2001.

The Vermeule was scheduled to be auctioned on September 11, 2001. After the World Trade Center buildings were attacked by Al Qaeda terrorists in the morning, this auction was postponed. Stack’s sold this coin in New York on November 12, 2001, for $414,000. At the time, the Vermeule 1893-S had never been certified.

Cornelius C. Vermeule III was a famous figure among collectors of ancient coins. He was born into a wealthy family and started collecting ancient coins as a young boy. Vermeule was a curator at The Museum of Fine Arts in Boston from 1957 to 1996. He earned two degrees at Harvard and a doctorate at the University of London in 1953. Cornelius Vermeule, his father and his grandfather had multiple ancestors who were each also named Cornelius Vermeule, two of which were involved in fighting the British in New Jersey during the American Revolutionary War.

According to the Stack’s catalogue in 2001, Vermeule inherited this 1893-S dollar from his grandfather, Cornelius C. Vermeule I. Evidently, it had been owned by a Vermeule for more than a half a century, perhaps even for more than a whole century! Although Vermeule had other important U.S. coins, including a Proof 1893-CC Morgan, this 1893-S drew attention to him and to the auction, because the 1893-S is the key date business strike Morgan and is an extreme condition rarity in gem grades.

While there are a handful of MS65 grade 1893-S silver dollars, the Vermeule coin and the Norweb Family 1893-S are the only two that ever merited a grade above MS65! In November 1988, Bowers & Merena (New Hampshire) auctioned the Norweb 1893-S for $357,500, which was then an auction record for any silver dollar. During the same year, Andy Lustig purchased the Carter 1794 silver dollar privately for $375,000.

As I reported in detail at the time in another publication, the Vermeule 1893-S traded privately for more than $1 million in October 2008. Then or later, the collector who formed the “Coronet” set of Morgans acquired it. In 2017, Legend auctioned the Coronet Collection of gem quality Morgan dollars. The Vermeule-Coronet 1893-S did not sell. Legend’s estimate in 2017 was $1.3 million to $1.5 million, thus suggesting the possibility that no one bid as much $1.35 million.

In response to my inquiries, dealer Yosef Baker reports that he “brokered” the Vermeule-Coronet 1893-S Morgan dollar in “late 2017 or early 2018.” Baker notes that he sold it to the individual who consigned it to GreatCollections.

Photographs do not accurately depict either the Eliasberg 1892-S or the Vermeule 1893-S. The Vermeule 1893-S is especially not photogenic; people who see pictures of it really do not know what it looks like!

The Vermeule 1893-S really has to be examined in actuality, under a lamp, in a properly dark room for its greatness to be absorbed by a coin enthusiast. There are delicate layers of multi-colored toning that formed gradually over generations, with much crisp underlying original luster. The greens, blue and orange-russet tints are delightful. The reverse is awe-striking and nearly flawless.

The originality of the Vermeule 1893-S is one its most important features. In general, the vast majority of gem quality Morgan dollars have been dipped in acidic solutions, which strip metal and toning from the coins. Silver coins that have been recently dipped tend to have an unnatural, bright white appearance. Over time, many dipped coins naturally retone in a pleasant manner; others appear unnatural for generations. Different coins are affected differently by dipping. It is generally believed that, for uncirculated silver coins with dark brown or black toning, the benefits of a dipping usually outweigh the harm done.

Fortunately, the natural tones on the Vermeule 1893-S are light and varied. The underlying original luster is crisp and alive.

In an old article, which remains posted online, I discuss the physical characteristics of the 1893-S Morgans that have been certified as grading MS65 or higher. The Antelope Valley coin resurfaced after that article was published in 2014.

While the Antelope-Stone 1893-S is attractive and is outstanding in the technical category, it is not characterized by crisp luster and pretty colors. Business strike Morgans, even gems, usually have lots of contact marks and small scratches. The Antelope-Stone coin hardly has any blemishes. Still, it had obviously been dipped in the past and had been very slowly naturally retoning.

Though perhaps the fifth finest known 1893-S Morgan, the CAC approved, PCGS graded MS65 Larry Miller coin scores higher in the category of originality than the Antelope-Stone 1893-S. I discuss the Larry Miller 1893-S in a recent auction review in The Monthly Greysheet (https://tinyurl.com/MillerTimeForMorgans).

Among those that have been PCGS or NGC certified as grading MS65 or higher, my very tentative condition ranking for 1893-S Morgans is, as follows. It is more fun to refer to coins by name than to numerical grades.

As I have discussed them in various articles in the past, I will not bore people with long descriptions now.

The “Lord Baltimore” 1893-S was in an NGC registry set, was traded by Bob Green to Mark Yaffe at the 2008 ANA Convention as part of a set of Morgans, and was offered in a Spectrum-B&M auction in September 2008. The Sanderson-Moser 1893-S has been in at least three Heritage auctions over the past two decades, including the FUN auction in January 2009.

Long ago, I was extremely disappointed that I had only a chance to glance at the Amon Carter 1893-S. There was some kind of dispute regarding the coin, which prevented it from being offered at that time. I never had a chance to carefully examine it, though my glance suggests that it had much attractive natural toning and would probably be a little more appealing than a few of the others that have been certified as MS65, though I am not certain. Other experts have voiced positive remarks about the Carter 1893-S to me.

Certainly, the Eliasberg-Sunnywood 1893-S, which was PCGS graded MS65 and CAC approved, is one of the most valuable of all Morgan dollars. Of other dates, several of the most valuable Morgans were auctioned by Stack’s-Bowers last November, as part of the Larry Miller Collection.

Although the 1893-S is the scarcest business strike in all grades, the 1889-CC is a similar condition rarity in gem grades, coins that grade MS65 or higher. The PCGS graded MS68 1889-CC, which was earlier in the Eliasberg Collection, is the finest known 1889-CC. Even if the MS68 grade is disputed, it remains the finest known, in my view. Among those that I have seen, there are no other 1889-CC Morgans that I would grade as high as MS66! Furthermore, I have never heard a pertinent expert say that there is another 1889-CC Morgan that merits a grade of at least MS66. Does the second finest known 1889-CC grade MS65?

The third highest auction price for a Morgan dollar was the $780,000 paid for the Miller-Miller 1886-O, which was PCGS certified as MS67 DMPL. It is a double Miller, as it has been owned by Wayne Miller and Larry Miller, who are unrelated as far as I know. Wayne Miller, a collector-dealer, is a legend among silver dollar enthusiasts. Larry Miller’s epic set of Morgans was auctioned by Stack’s-Bowers in 2020.

Even if the Miller-Miller 1886-O or the Bodway-Lee-Miller 1884-S was dated 1893-S, the Vermeule 1893-S would be a more desirable coin, in my opinion. Of many dates, I have seen a large number of dipped, animated Morgans, including quite a few prooflike coins. I have also seen an endless number of dipped, superb Morgans that glow after a little natural retoning. Although I understand why many collectors find such dipped Morgans to be desirable, these do not have the personality of very much original, colorfully toned coins, with underlying crisp luster. Even if it was not an 1893-S, this Vermeule coin would be distinctive and entrancing, a Morgan dollar to vividly remember.

I have some pretty nice Morgan's my mom saved from the casinos, but I'm on disability and cannot afford to have them graded, I also have peace, Ike's Anthony's, Kennedy's quite a few. Could use some help maybe I'd have some for the collectors out there missing one. Sincerely Pamela Johnson