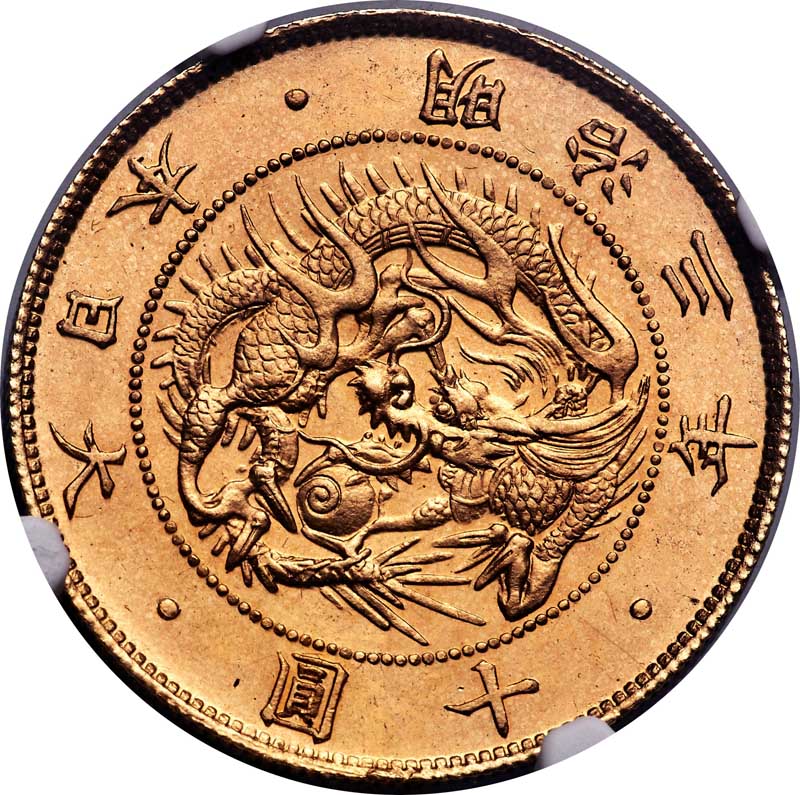 “This is one of the most impressive Japanese coins likely to reach the open market for some time,” says Cris Bierrenbach, Executive Vice President of International Numismatics at Heritage Auctions. “It is one of the finest representatives within the entire Japanese series, the epitome of conditional and absolute rarity. Pattern coins produced during the Meiji era remain a difficult portion of Japanese numismatics. So it’s no surprise that this coin, especially in such exceptional condition, drew such competitive bidding.”

A Victoria gold Proof "Una and the Lion" 5 Pounds 1839 PR63 Ultra Cameo NGC , by William Wyon, soared above pre-auction expectations until it closed at $372,000. Designed exclusively for inclusion in Victoria's delayed 1839 Proof Set, the artistry in this coin is widely recognized to have inspired equal renown when it first was produced 183 years ago. It generated demand that far exceeded the original mintage of approximately 400, subsequently necessitating the Royal Mint's production of additional examples upon demand for nearly a half a century, until 1886.

The Una and the Lion 5 Pounds was one of seven coins by Wyon that sold in the auction. Others included, but were not limited to:

The finest of all certified and likely uncertified representatives across all mintmarks for the type, an Elizabeth I (1558-1603) gold Pound ND (1595-1598) MS66★ NGC doubled its high pre-auction estimate when it sold for $240,000. The coin is a spectacular rarity of not only Elizabethan coinage, but of all British numismatics, struck in the later years of the famed queen's reign and ranking leagues beyond many of even the finest survivors of her monarchy. 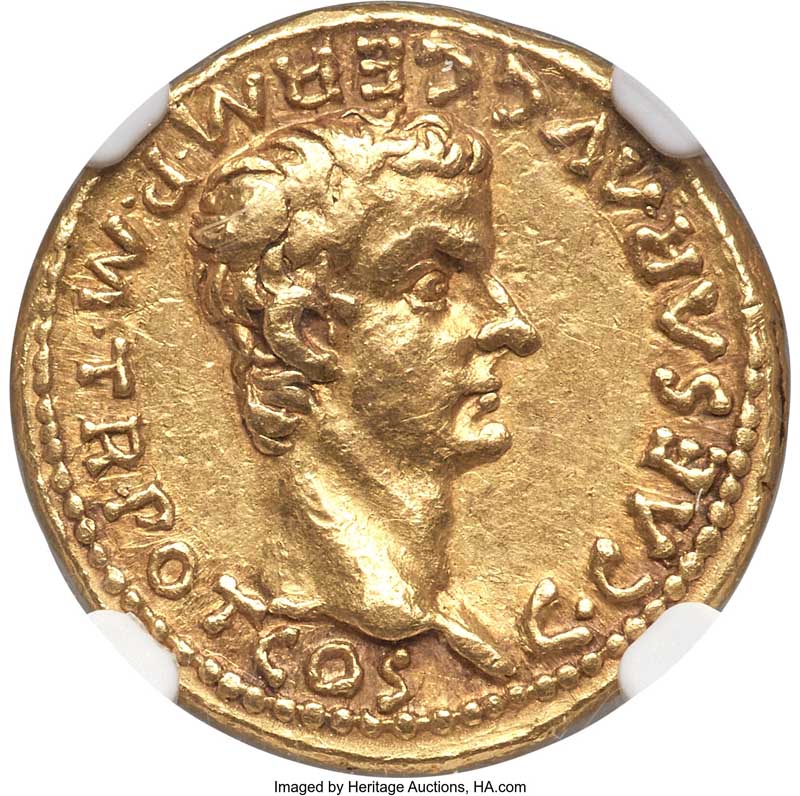 This exceptional Octavian, as Consul (43 BC), with Julius Caesar, as Dictator Perpetuo and Pontifex Maximus is one of exceedingly few near-contemporary gold portraits of Julius Caesar.

Historical Scholar Collection
Among the highlights in this trove, which included nearly 200 lots, was an Octavian, as Consul (43 BC), with Julius Caesar, as Dictator Perpetuo and Pontifex Maximus. AV aureus (19mm, 8.08 gm, 7h). NGC Choice VF 3/5 - 4/5 , which raced past pre-auction expectations until it finished at $228,000. This exceptional example is one of exceedingly few near-contemporary gold portraits of Julius Caesar.

Other highlights from the Historical Scholar Collection include, but are not limited to:

Petropolis Collection
The auction included 206 lots from the Petropolis Collection, Part I – a selection of seldom-seen gold rarities of a caliber of the sale nearly a decade ago of the Collection of Dr. Roberto de Lemos Monteiro — The RLM Collector, who assembled one of the most prestigious collections of Brazilian gold types seen in this century.

The group was led by a João V gold 6400 Reis (Peça) 1731/21-M UNC Details (Saltwater Damage) NGC that tripled its high pre-auction estimate when it sold for $90,000. According to the law in 1732, anyone found carrying these old-edge issues would be considered a counterfeiter, suffering the severe sanctions of four years of exile in Africa, as well a fine on top of having the unlawful coins confiscated. The very few that survived this period are likely pieces that found themselves away from circulation, perhaps hidden in hoards, taken out of Brazil or lost at sea.

Other top lots from the Petropolis Collection included, but were not limited to:

Cape Coral Collection of German Coins
The auction found new homes for 279 lots from this exceptional collection, which included some of the finest World Crowns ever brought to market. Among the prizes in the collection that awaited eager bidders were selections from what is widely regarded as the finest assemblage of German Talers ever compiled by a private collector.

The collection was led by a Brandenburg. Friedrich Wilhelm Taler 1679-CS MS66 NGC , the finest-certified representative of this rare, cherished issue, which sold for $31,200. Other top results in the collection included: