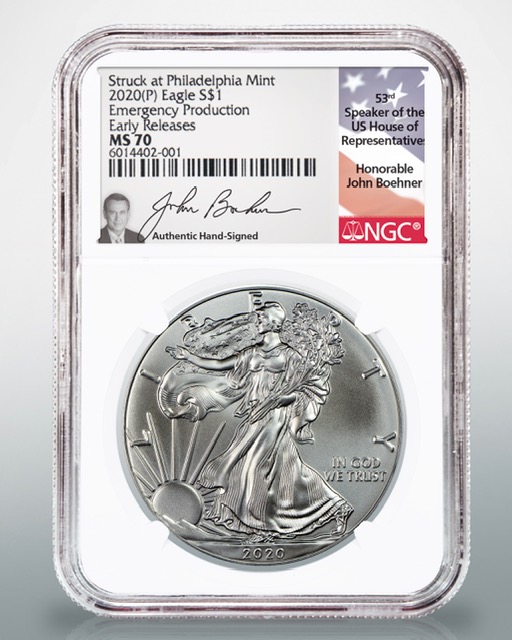 Former Speaker of the U.S. House of Representatives, John Boehner, has personally signed inserts on a limited number of the scarce 2020 silver American Eagles

(Plymouth, Minnesota) May 18, 2020 – A former Speaker of the U.S. House of Representatives, the honorable John Boehner of Ohio, has personally signed inserts on a limited number of the scarce 2020 silver American Eagles struck during the recent emergency production at the United States Mint facility in Philadelphia. These coins, certified as MS 70 Early Release (ER) and First Day of Issue (FDI) by Numismatic Guaranty Corporation ( www.NGCcoin.com), are being offered exclusively by Westminster Mint ( www.coin-rare.com).

“I hold the values of economic freedom, individual liberty and personal responsibility very dear. In many ways, American currency represents all of these values. For this reason, I’m very proud to collaborate with NGC to champion the American dream as it is reflected in our nation’s coins,” said Boehner, who served nearly a quarter-century in Congress and was the 53 rd Speaker of the House from 2011 to 2015.

Silver American Eagle bullion coins dated 2020 were supposed to be struck at the West Point Mint and the San Francisco Mint, but West Point was briefly closed due to the coronavirus. Mint records indicate only 240,000 of the one-ounce silver American Eagles were struck in emergency production at the Philadelphia Mint between April 8 and April 20 this year.

“As a leading dealer in the signature series of NGC graded coins, we’re excited to partner with Mr. Boehner. I expect massive interest for these historic coins with the Boehner-signed NGC inserts,” said Ian Clay, President of Westminster Mint and author of the major reference book, Modern Coin Rarities--1986-2016.

“The 2020 (P) emergency silver Eagles are the inaugural offering for Speaker Boehner hand-signed encapsulated coins inserts. Westminster plans to offer other 2020 silver Eagles, gold Eagles, and gold Buffalos as well as many modern rarities from 1986 gold Eagles to 2009 Ultra High Relief and other issues graded a perfect 70 by NGC,” revealed Clay.