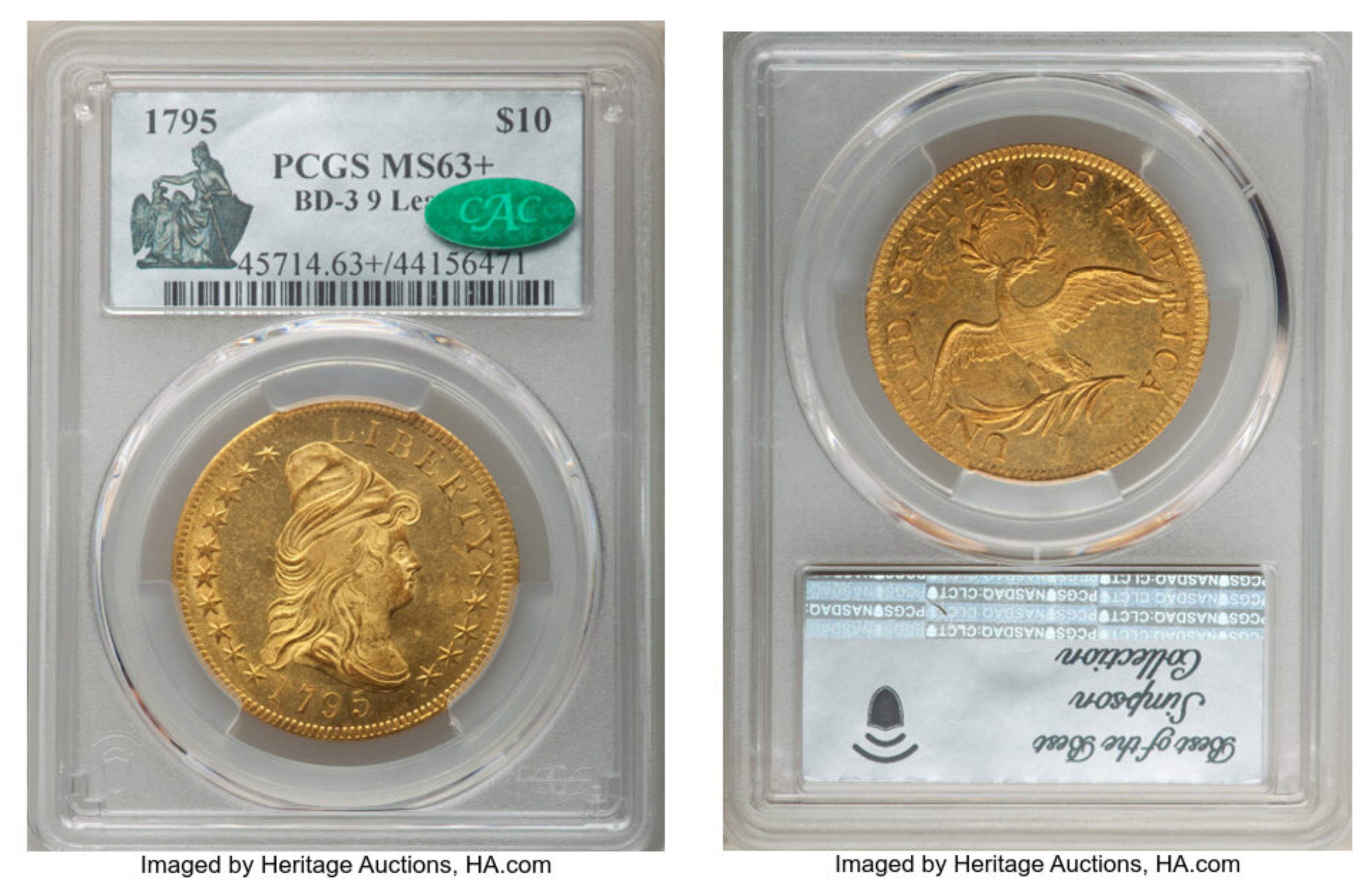 By the time the hammer fell for the final time in each auction, the numbers told the story: seven lots produced seven-figure results, records fell, tying the record for the most seven-figure lots ever in a Heritage auction. The three events amassed $74,275,280 in total sales; the US Coins auction brought $65,422,650, the Currency event $6,995,178 and the World Paper Money sale $1,857,462.

“The results of the FUN auctions have reaffirmed Heritage Auctions’ position as the world’s premier numismatic auctioneer,” Heritage Auctions Executive Vice President Todd Imhof said. “The seven lots that surpassed $1 million refocus the spotlight on the fact that owners of the world’s finest coins trust us to bring them the best possible results.”

US Coins
The seven lots that topped the million-dollar mark all were from the US Coins event, and each set a new record; among the seven-figure results were five from the collection of Bob R. Simpson. The offerings from the Simpson Collection alone totaled $22,427,460.

Leading the way was a 1795 Nine Leaves Ten Dollar, BD-3, R.6, MS63+ PCGS. CAC , the rarest and most popular of all the Capped Bust Right, Small Eagle tens, which soared to 3,360,000, crushing the previous world record by more than $2.3 million. John Dannreuther calls this issue "the king of the Small Eagle type." The offered coin was acquired in 1989 by Mack and Brent Pogue, who made it the cornerstone of their collection of early eagles; at the time, the cataloger called it "a coin that towers head and shoulders above its competition." The Pogues sold it at auction in 2015 for just over $1 million, shortly before it was sold to Simpson.

A Justh & Hunter Gold Ingot , the largest S.S. Central America ingot ever offered at auction, sparked 55 bids before finishing at $2.16 million. Justh ingots ranged widely in size; the smallest was 5.24 ounces, while the largest is this massive specimen from the San Francisco office weighing in at a mighty 866.19 ounces. This magnificent example is second only in weight to the "Eureka!" Kellogg & Humbert ingot, which weighs 933.94 ounces, making this the largest Justh & Hunter ingot from that assaying office known in the world; it is also the largest ingot ever offered at public auction.

Also bringing $2.16 million, topping the previous record of $1,725,000, was a 1796 Quarter Eagle No Stars on Obverse, BD-2, R.4, MS62+ PCGS. CAC , one of the most sought-after U.S. gold types ever struck and the only Draped Bust issue in the U.S. gold series without obverse border stars. Why border stars were omitted is not entirely clear, although many numismatic scholars suggest the decision was influenced by the Mint's transition from punching one star for each state in the Union to punching just 13 stars, representing the original 13 colonies. The 1796 No Stars quarter eagle is arguably the most distinctive early gold issue in U.S. numismatics.

Another prize from the Simpson Collection, an 1874 Bickford Ten Dollar, Judd-1373, Pollock-1518, R.8, PR65+ Cameo PCGS that is one of only two known examples of the coin that is among the rarest, most valuable and mysterious issues in all of numismatics, brought in nearly three dozen bids before closing at a record $1.98 million; the previous record was $1,265,000.

An 1861 Double Eagle PR66 Deep Cameo PCGS. JD-1, High R.7 , also from the Simpson collection and recognized as one of the rarest issues in the series, was won with a record bid of $1.8 million, more than tripling the coin’s previous world record. One of just 66 proof double eagles struck in 1861, this example is one of just five known to remain in proof format; after the start of the Civil War in April of that year, the Mint ceased specie payments and gold and silver were driven out of circulation.

A 1796 Quarter B-2, R.3, MS66 PCGS , struck from perfect dies that were engraved by Robert Scot, finished at $1.74 million. From a total mintage of 6,146 pieces, spread out over four deliveries from April 1796 to February 1797, this extraordinary Premium Gem example was one of the early strikes from the B-2 die pair, and appeared first in the 1796 quarter dollar emission sequence. This note is the third-finest example in the Rea-Koenings-Haroutunian Condition Census.

The seventh lot to crack the million-dollar plateau was a 1792 Disme, Judd-10, Pollock-11, High R.6, SP64 Brown PCGS , which ended at $1.17 million, almost twice its previous record. The finest certified Judd-10 example, it is among the first coins struck inside the Philadelphia Mint. The 1792 pattern coinage combined technical coinage experimentation with differing representations of Liberty. Three distinct styles of Liberty appeared. Loosely curled hair appeared on the Birch cents and the half dismes, tightly coifed and braided hair appeared on the Eagle-on-Globe quarters and Flowing Hair appeared on the silver-center and fusible alloy cents, as well as the copper and silver dismes, like this one.

Additional records that were set included, but were not limited to:

Currency
A Fr. 1218g $1,000 1882 Gold Certificate PCGS Extremely Fine 40 drew a dozen bids before finishing at $456,000. It is one of just four examples, and one of only two that have been made available to the public; the other two are in the holdings of the Federal Reserve Bank of San Francisco and the Smithsonian Institution.

Notes this rare usually only come along once in a lifetime,” Heritage Auctions Numismatics Vice President Dustin Johnston said. “This auction was a tremendous success, with nearly 1,200 lots drawing 2,300 bidders from around the world. The sell-through rates of 99.6% by value and 98.6% by lots reflect the exceptional quality found in lots at all levels of the auction.”

A Fr. 2221-K $5,000 1934 Federal Reserve Note. PMG Choice Uncirculated 64 EPQ ended at $312,000. This note, from the BREA collection, is one of just 2,400 printed and issued through the Federal Reserve Bank of Dallas, each contains a lime green overprint. This note is new to the census and features a low serial number of 67. Among the $5,000 notes graded in all districts, few have earned higher marks; in the last two decades, only one Gem example has made it to public auction.

Sixteen bids drove a Fr. 2231-A $10,000 1934 Federal Reserve Note. PMG Choice Uncirculated 63 up to $300,000. One of the most coveted pieces of collectible U.S. currency, and with a serial number that until now had not been captured by census takers, this note's high face value precluded it from being set aside as a souvenir. About a dozen Series 1928 notes and around 200 of the Series 1934 notes are known in all grades and districts combined for this denomination, and of that total, roughly half of the 1934 notes are from the New York district, thanks to the famous Binion hoard, with the remaining survivors scattered over the other 11 Federal Reserve districts.

One of just eight known examples of a Fr. 150a $50 1863 Legal Tender PMG Choice About Unc 58 EPQ , one of which is housed in the holdings of the Federal Reserve Bank of San Francisco, drew a winning bid of $288,000. Featuring the Second Obligation back with the 1863, this example is easily the finest of that group of eight notes; none of the others in the group is graded above an impaired Very Fine.

A Fr. 1132-J $500 1918 Federal Reserve Note PMG Choice About Unc 58 drew 19 bids before closing at $90,000. This is the finest-graded example of roughly a dozen of this Friedberg number reported to the census, and was the beneficiary of demand that remains high for large-size high-denomination notes. The mere existence of this note is exceptional, considering there never was an effort made to preserve them.

World Paper Money
An extremely rare India Government of India 5 Rupees ND (1917-30) Pick 3acts Jhunjhunwalla-Razack 14.26 Color Trial Specimen PMG About Uncirculated 50 led three nots that eclipsed $40,000 when it drew 31 bids before selling for $43,200, more than doubling its pre-auction estimate. It is a prototype for a very rare offering, it represents an unadopted design for the 5 Rupees notes featuring King George V, a design that eventually was issued in 1925.

An India Government of India, Bombay 10 Rupees 7.6.1862 Pick A1 Jhunjhunwalla-Razack 2.1.1-4 PMG Very Good 10 Net more than quadrupled its pre-auction estimate when it brought a winning bid of $40,800. The Bank of England printed this impressive, short-lived offering, but the chosen paper was weak and did not withstand the tropical climate of India, leading to notes wearing out and the emergence of counterfeiting.

Reaching the same $40,800 was a rare Australia Commonwealth of Australia 50 Pounds ND (1918) Pick 8b R67a PMG Very Fine 30 EPQ . Sixteen bids came in for this important offering from the Shillings/Pounds era. Matching serif font for the prefix Y and serial number indicate that this note was issued around 1920 and is therefore not the more recent variety that was issued in the 1940s.

Other top lots include, but were not limited to: