One of America’s greatest coins, the 1907 Saint-Gaudens Ultra High Relief , has changed hands for a record $4.75 million in a private transaction between GreatCollections Coin Auctions of Irvine, Calif., and Heritage Auctions of Dallas, Texas. 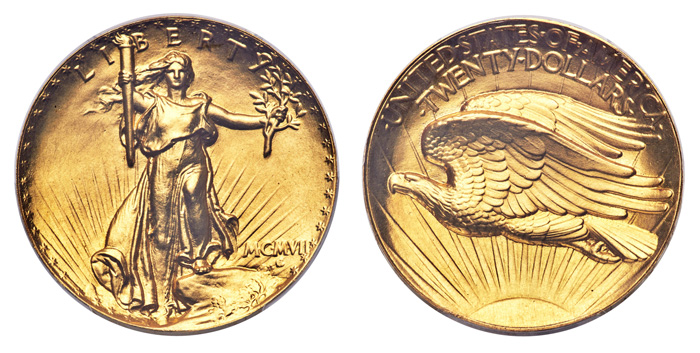 IRVINE, California / DALLAS, Texas (December 13, 2021) – One of America’s greatest coins, the 1907 Saint-Gaudens Ultra High Relief, has changed hands for a record $4.75 million in a private transaction between GreatCollections Coin Auctions of Irvine, Calif., and Heritage Auctions of Dallas, Texas.

The 1907 Saint-Gaudens Ultra High Relief PCGS Proof-68 CAC is among the finest examples known, and last appeared in a 2007 Heritage auction where it realized $1.84 million. 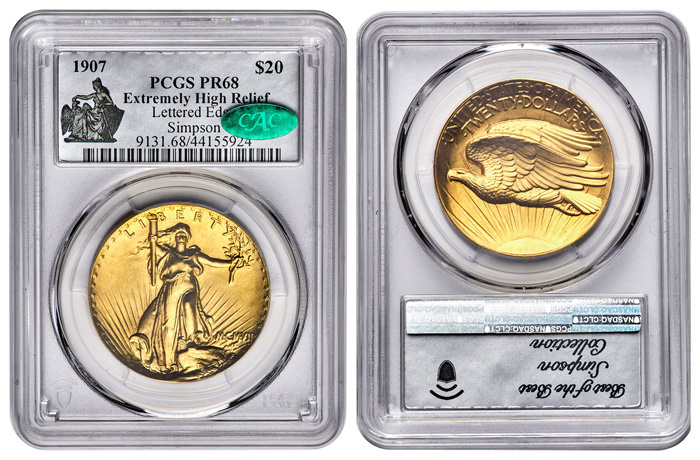 “After our display of the legendary 1933 Saint-Gaudens at the ANA in August, we had been searching for a superb Ultra High Relief for the same owner as the 1933 Saint. Twenty years ago, he set his goal to own both of these coins and today he realized his dream,” said Ian Russell, president of GreatCollections, after purchasing the coin from Heritage.

The coin was owned by Bob R. Simpson, founder of XTO Energy and an owner of the Texas Rangers, who purchased it in 2007 for $1.84 million. Prior to Mr. Simpson’s ownership, its pedigree includes the famed J.F. Bell and Col. E.H.R. Green collections.

“The Ultra High Relief is truly one of the most impressive rarities in numismatics, with most examples residing in the cabinets of long-term collectors. We are grateful to Mr. Simpson for giving us the opportunity to handle this treasure via private treaty, and to Ian for the seamless transaction,” said Todd Imhof, Executive Vice President at Heritage.

The Ultra High Relief issue was never available to the general public or even to numismatists at the time, and nearly all known examples can be traced back directly to President Theodore Roosevelt or Chief Engraver Charles Barber. President Roosevelt had a vision in 1905 to create iconic coinage for the United States, and he enlisted Augustus Saint-Gaudens, a renowned sculptor.

Less than 20 of the Ultra High Relief, or Extremely High Relief, were minted and it is estimated just 13-15 exist today. Aside from the Ultra High Relief, a High Relief version was also issued in 1907, which is very popular among collectors and routinely sells for $20,000-40,000 in low- to mid-uncirculated grades. A regular low relief issue was then used on all Double Eagles ($20 Gold Pieces) from 1907 until 1933.

2021 has been a record year of sales at both Heritage Auctions and GreatCollections, with increased demand for almost all areas of numismatics and other collectibles.

GreatCollections was also the winning bidder for the two most valuable coins in Heritage’s August ANA auction : the 1794 Silver Dollar graded PCGS MS-66+ CAC , which realized $6.6 million, and the finest of two known 1861 Paquet Gold Double Eagles , which realized $7.2 million – both all-time records, and in the top 10 auction prices for rare coins.

Does anyone know if the Smithsonian has one of these on exhibit? I just love their coin exhibit, and I have been there a couple times but it's been a few years and I just don't remember if this particular coin was there…