A recent press release announced our partnership with the ANA to include select portions of our new retail price guide, or CPG, in the association’s “Numismatist” magaz 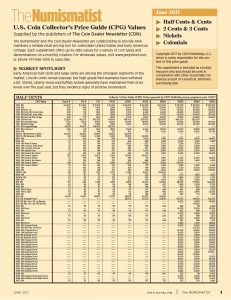 A recent press release announced our partnership with the ANA to include select portions of our new retail price guide, or CPG, in the association’s “Numismatist” magazine. The friendly arrangement is a win-win for both CDN and ANA, as we work to make this great publication even more useful for its readers. More importantly, we hope it will help the ANA attract new members, which is important for all of us in numismatics. The June issue is already out with pricing. If you are not an ANA member, join today at www.money.org.

CPG pricing is derived from our wholesale data based on algorithms to calculate a reasonable markup for dealers. As wholesale prices in CDN change, CPG values will move in lock-step. Dealers may inquire with us on how to include CPG pricing on their web sites as a tool to help sell coins.

Prices for many circulated examples are flattening out thanks to large influxes of Euro-hoard coins. Patrick Ian Perez reports that MS64’s are now the ideal grade for this series.

We’ve separated CAC from non-CAC in MS63-65 grades for the first time ever. It will be much easier to follow value trends for this popular series going forward. See cover story in the June 2 Bluesheet.

Key dates like 1877 and 1909-S are still struggling to find the bottom in circulated grades. Mint state Indians are doing better, helped by market support led by Eagle Eye Rare Coins, who has posted a number of bids on CDN Exchange.

We note a solid distribution of gainers and losers this month as recent auction data has been fairly reliable.

After posting some of the best sustained gains for a silver series recently, high-end Walkers are showing a little softness.