The end of January saw the first PCGS Member’s Only show of 2018, held as usual in Las Vegas. Coming a few short weeks after the huge FUN show, the show was not as pack 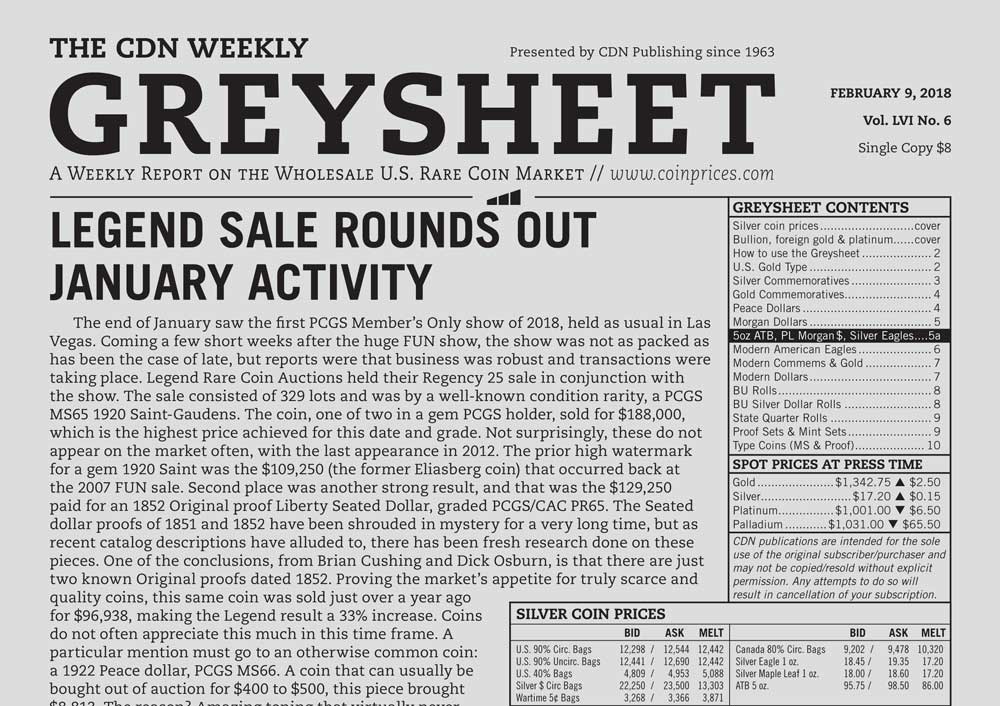 The end of January saw the first PCGS Member’s Only show of 2018, held as usual in Las Vegas. Coming a few short weeks after the huge FUN show, the show was not as packed as has been the case of late, but reports were that business was robust and transactions were taking place. Legend Rare Coin Auctions held their Regency 25 sale in conjunction with the show. The sale consisted of 329 lots and was by a well-known condition rarity, a PCGS MS65 1920 Saint-Gaudens. The coin, one of two in a gem PCGS holder, sold for $188,000, which is the highest price achieved for this date and grade. Not surprisingly, these do not appear on the market often, with the last appearance in 2012. The prior high watermark for a gem 1920 Saint was the $109,250 (the former Eliasberg coin) that occurred back at the 2007 FUN sale. Second place was another strong result, and that was the $129,250 paid for an 1852 Original proof Liberty Seated Dollar, graded PCGS/CAC PR65. The Seated dollar proofs of 1851 and 1852 have been shrouded in mystery for a very long time, but as recent catalog descriptions have alluded to, there has been fresh research done on these pieces. One of the conclusions, from Brian Cushing and Dick Osburn, is that there are just two known Original proofs dated 1852. Proving the market’s appetite for truly scarce and quality coins, this same coin was sold just over a year ago for $96,938, making the Legend result a 33% increase. Coins do not often appreciate this much in this time frame. A particular mention must go to an otherwise common coin: a 1922 Peace dollar, PCGS MS66. A coin that can usually be bought out of auction for $400 to $500, this piece brought $8,813. The reason? Amazing toning that virtually never appears on Peace dollars. While almost all collectors can agree that colorful toning on a coin is visually impressive and attractive, there is much disagreement on how much value said toning adds to a coin, especially one that is otherwise common. The market has consistently shown that the premium can be astronomical when the toning is “all there.” Other highlights of the Legend Regency 25 sale included a collection of high grade 3-cent silvers and early gold. Speaking of gold, it is clear that this is the strongest segment of the market right now. It has helped that spot price has risen roughly $100 from a mid-December low of around $1,250. On the other hand as spot has risen, the generic gold premiums have compressed. Collector gold, however, is very active, and any piece that is original and correctly graded that appears on the market gets snapped up quickly.