The round of September coin auctions has concluded to mixed results. In the lead up to the sales, the excitement was somewhat muted, however the overall sell-through ra 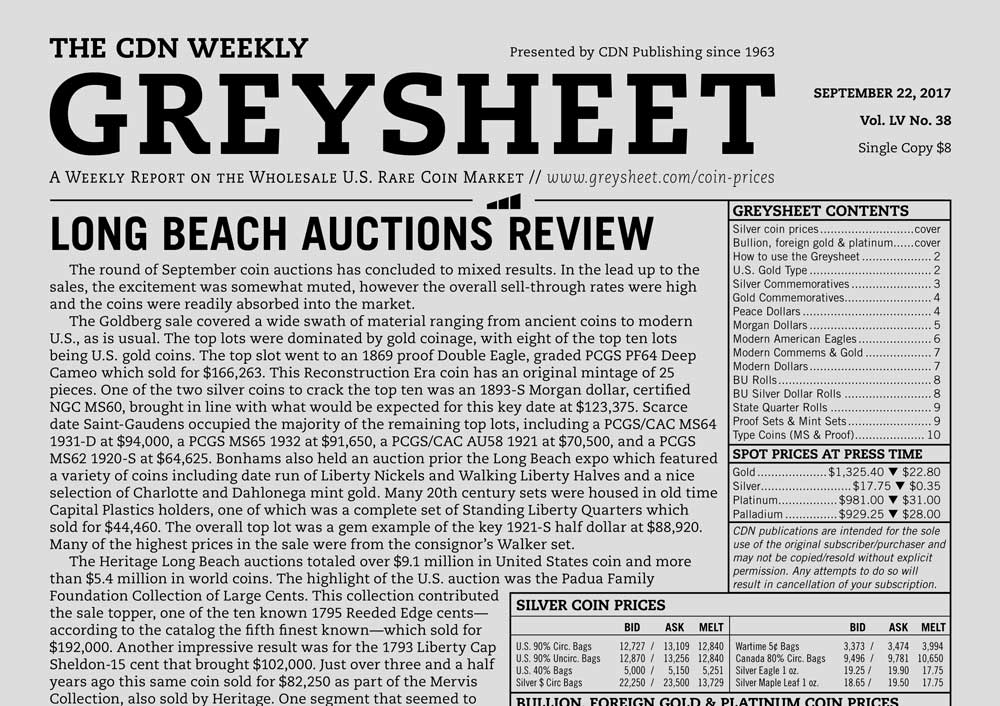 The round of September coin auctions has concluded to mixed results. In the lead up to the sales, the excitement was somewhat muted, however the overall sell-through rates were high and the coins were readily absorbed into the market.

The Goldberg sale covered a wide swath of material ranging from ancient coins to modern U.S., as is usual. The top lots were dominated by gold coinage, with eight of the top ten lots being U.S. gold coins. The top slot went to an 1869 proof Double Eagle, graded PCGS PF64 Deep Cameo which sold for $166,263. This Reconstruction Era coin has an original mintage of 25 pieces. One of the two silver coins to crack the top ten was an 1893-S Morgan dollar, certified NGC MS60, brought in line with what would be expected for this key date at $123,375. Scarce date Saint-Gaudens occupied the majority of the remaining top lots, including a PCGS/CAC MS64 1931-D at $94,000, a PCGS MS65 1932 at $91,650, a PCGS/CAC AU58 1921 at $70,500, and a PCGS MS62 1920-S at $64,625. Bonhams also held an auction prior the Long Beach expo which featured a variety of coins including date run of Liberty Nickels and Walking Liberty Halves and a nice selection of Charlotte and Dahlonega mint gold. Many 20th century sets were housed in old time Capital Plastics holders, one of which was a complete set of Standing Liberty Quarters which sold for $44,460. The overall top lot was a gem example of the key 1921-S half dollar at $88,920. Many of the highest prices in the sale were from the consignor’s Walker set.

The Heritage Long Beach auctions totaled over $9.1 million in United States coin and more than $5.4 million in world coins. The highlight of the U.S. auction was the Padua Family Foundation Collection of Large Cents. This collection contributed the sale topper, one of the ten known 1795 Reeded Edge cents—according to the catalog the fifth finest known—which sold for $192,000. Another impressive result was for the 1793 Liberty Cap Sheldon-15 cent that brought $102,000. Just over three and a half years ago this same coin sold for $82,250 as part of the Mervis Collection, also sold by Heritage. One segment that seemed to experience a small resurgence at both Heritage and Goldberg were pattern coins. Heritage sold two $4 Stella patterns, one aluminum and one copper, for $120,000 and $108,000, respectively. Heritage also sold an example of Judd-1565, an 1878 dollar in copper, with an obverse like the Morgan dollar and a different reverse, for $24,000. Goldberg sold an 1838 pattern half dollar in copper (Judd-81) for $39,363.

The next round of U.S. coin auctions take place in early November, with Heritage holding a sale in Dallas and the Stacks Bowers Baltimore auction.

This week we continue re-pricing MS63-MS67 Morgan dollars on the Greysheet to reflect the value of non-CAC coinage. We will conclude with the September 29 issue and display the CAC value columns as well. This information is already available on our web site.