An exciting announcement came recently via Sotheby’s, with the details of the Ralph and Lois Stone Collection that is to be auctioned in May. As part of their Historic 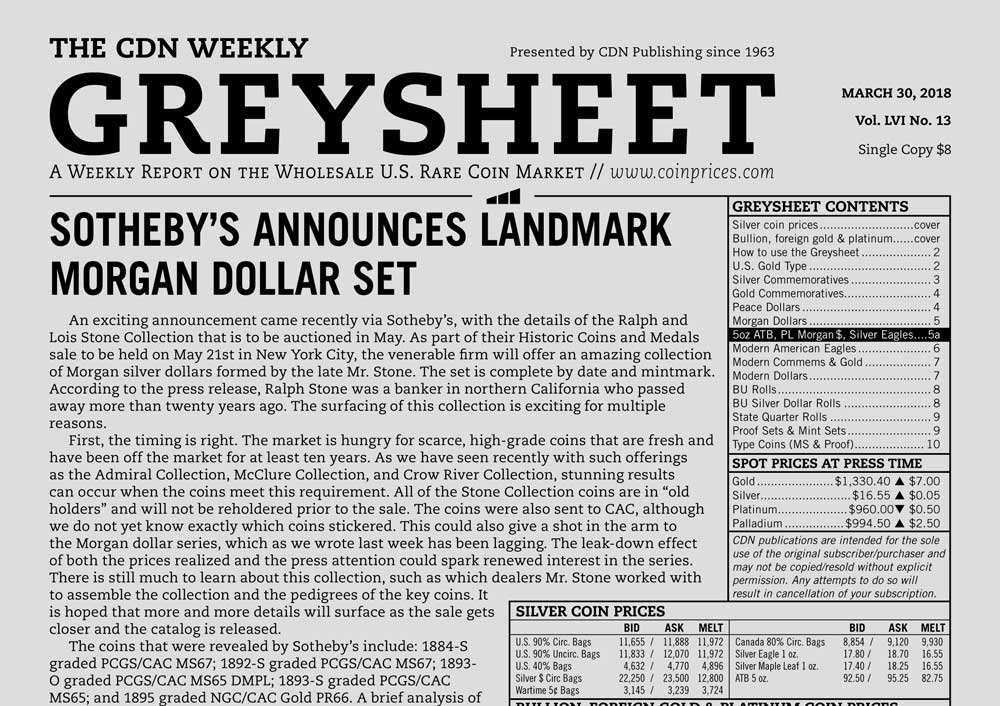 An exciting announcement came recently via Sotheby’s, with the details of the Ralph and Lois Stone Collection that is to be auctioned in May. As part of their Historic Coins and Medals sale to be held on May 21st in New York City, the venerable firm will offer an amazing collection of Morgan silver dollars formed by the late Mr. Stone. The set is complete by date and mintmark. According to the press release, Ralph Stone was a banker in northern California who passed away more than twenty years ago. The surfacing of this collection is exciting for multiple reasons.

First, the timing is right. The market is hungry for scarce, high-grade coins that are fresh and have been off the market for at least ten years. As we have seen recently with such offerings as the Admiral Collection, McClure Collection, and Crow River Collection, stunning results can occur when the coins meet this requirement. All of the Stone Collection coins are in “old holders” and will not be reholdered prior to the sale. The coins were also sent to CAC, although we do not yet know exactly which coins stickered. This could also give a shot in the arm to the Morgan dollar series, which as we wrote last week has been lagging. The leak-down effect of both the prices realized and the press attention could spark renewed interest in the series. There is still much to learn about this collection, such as which dealers Mr. Stone worked with to assemble the collection and the pedigrees of the key coins. It is hoped that more and more details will surface as the sale gets closer and the catalog is released.

The coins that were revealed by Sotheby’s include: 1884-S graded PCGS/CAC MS67; 1892-S graded PCGS/CAC MS67; 1893-O graded PCGS/CAC MS65 DMPL; 1893-S graded PCGS/CAC MS65; and 1895 graded NGC/CAC Gold PR66. A brief analysis of these five coins whets the appetite for the whole collection. The famous condition rarity 1884-S has never had an example above MS65 cross the auction block. The Stone MS67 is only bested by the MS68 Jack Lee coin, and will surely set a new record for the date. The 1892-S—which we wrote just last week was one of the bright spots of the series—is one of three MS67 coins with the CAC sticker. The last one to sell brought $470,000 in October. The 1893-O Deep Mirror Proof Like in gem has had only one auction appearance, way back in November of 2011 which was the Jack Lee specimen. Even non-Morgan dollar collectors know the phrase “1893-S,” and the Stone gem will bring much excitement to the collector community. While not the finest known (MS67 finest) the last PCGS MS65 coin to sell came in October 2014 bringing $646,250.

The Stone collection also contains complete high-grade sets of Three Cent Silvers and Classic Commemoratives, and a set of the 1915 Panama-Pacific gold Commemoratives.