Heritage Auctions recorded $1.4 billion in sales in 2021, marking the first time in its 45-year history the Dallas-based auction house has surpassed the billion-dollar mark. 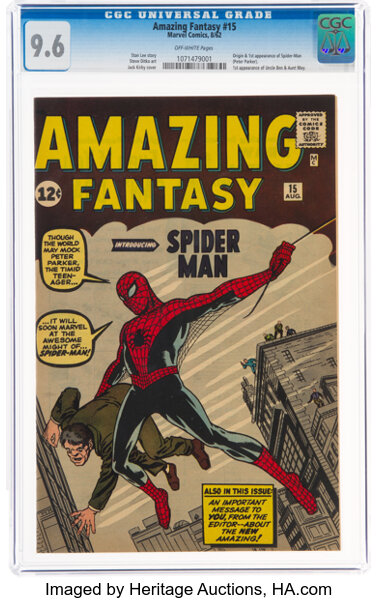 And it did not take a magic wand to reach this extraordinary benchmark.

“Heritage is built by collectors and for collectors,” says Heritage Auctions CEO and co-founder Steve Ivy. “Even when we are talking about serious money, the passionate pursuit of a collector is still a pursuit of fun, and we will never forget this. Our extraordinary success in 2021 was due to this very fact: We don’t sell things. We offer memories, passions, pursuits that bring broad grins to our clients’ faces.”

As a result Heritage Auctions’ collector-client base has grown like never before, expanding to more than 1.5 million clients worldwide in 2021 – an addition of more than 270,000 since January 2020. They are also younger than ever, as 37% of first-time bidders in 2021 were millennials, a marked increase over last year.

For the second year in a row, nearly every one of Heritage’s more than 40 categories saw marked year-over-year increases, among them Heritage Sports, which saw another historic year in 2021. Its nearly $200 million in total sales more than doubled the tally realized during what had been a momentous 2020.

This was the year Heritage Sports made headlines with a private sale, when, in May, the Canadian version of Wayne Gretzky’s 1979 rookie card sold for a world-record $3.75 million . That was one of numerous newsworthy tales scored by the Sports division, which sold an astonishing two 1909 Honus Wagner T206 cards for more than $2.2 million each ; began 2021 by selling the world’s first million-dollar Michael Jordan card ($1,440,000, to be precise); then three months later sold the only known Jordan game-worn University of North Carolina jersey photo-matched to his "Player of the Year" season for $1,380,000, making it the most expensive Michael Jordan jersey ever sold. 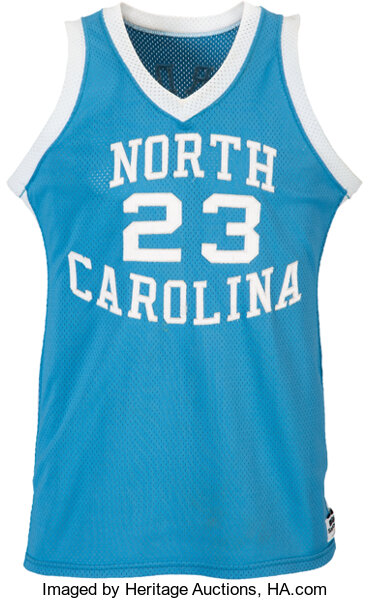 In between, Heritage Sports notched $42 million in sales during just one month , an unfathomable achievement only two years ago.

Comic Books & Comic Art likewise made an astonishing leap forward in 2021: This year the category saw sales reach $181,628,214, a 117% leap over last year’s figures to firmly establish Heritage Auctions as the world’s leading auctioneer of comics and original comic art.

Indeed, in September Heritage sold one of four known near-mint copies of Amazing Fantasy No. 15 for $3.6 million , making Spider-Man’s debut the most expensive comic book ever sold at auction. The auction house kicked off the year with an equally impressive record, when the sole best-known copy of BatmanNo. 1 brought $2,220,000 – the highest price ever paid for a Dark Knight comic book.

This was also the year Heritage Auctions realized the highest price ever paid for an original Charles Schulz Peanuts strip, when a December 1966 Sunday strip featuring A Charlie Brown Christmas sold for $360,000 . In that same September sale, Jack Kirby's Dr. Doom cover art for 1969's Fantastic Four No. 86 sold for $480,000 — the highest price ever paid at auction for an original work by comicdom's most influential creator.

Heritage’s Rare Books category likewise saw a dramatic uptick in 2021, posting a nearly 20% increase to $6,915,168. And a new chapter in that category’s history was written only weeks ago, when a rare first edition of J.K. Rowling's Harry Potter and the Philosopher's Stone sold December 9 for $471,000, the highest price ever paid for the boy wizard's debut in any form (or any single modern novel, for that matter).

Heritage’s Fine and Decorative Arts division also saw a record-shattering 2021, posting nearly $89 million in sales, a 46.4% increase over 2020. American Art proved especially notable this year, with two works by magazine-cover masters each topping $4 million: Norman Rockwell's beloved Home for Thanksgiving sold for $4.3 million in November , its proceeds benefitting an American Legion post in Massachusetts, while Joseph Christian Leyendecker's Beat-up Boy, Football Hero sold in May for $4.12 million , shattering the previous world record for a work by the influential illustrator.

World & Ancient Coins likewise saw an extraordinary uptick in sales in 2021, jumping to $130,683,917 – a 102.3% increase over last year’s figures. In March Heritage also set what was at the time a world record for the most expensive British coin ever sold at auction, when the Legendary Edward VIII Pattern 5 Pounds fetched $2,280,000 . The year ended with the $2,160,000 sale of the rare final pattern dollar of Chang Tso-lin , making it the third-most valuable Chinese coin ever sold at auction.

“Heritage has been a major force in the market for world and ancient coins for the past two decades, and this past year solidified us as the clear industry leader,” says Cristiano Bierrenbach, Heritage Auctions’ Executive Vice President of International Numismatics. “We’re grateful for the continued trust that our clients around the world put in us as their go-to place for buying and selling coins, and we’re excited for what the future holds.” 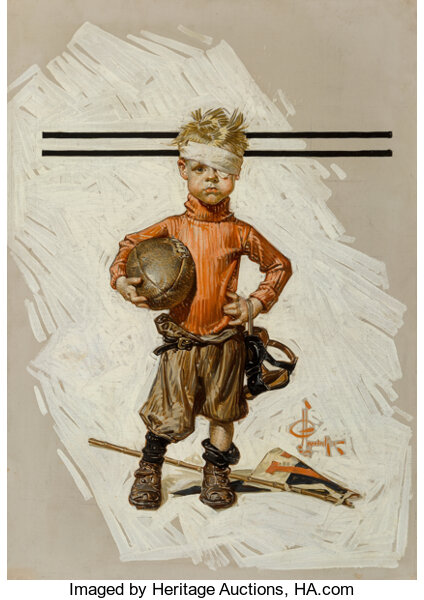 For Heritage Auctions, the future is especially bright in newer categories – among them Trading Card Games, Video Games and Entertainment & Music – that made the biggest strides in 2021 to underscore Heritage’s undisputed status as the World’s Largest Collectibles Auctioneer.

Trading Card Games – which counts among its offerings Pokémon, Magic: The Gathering and Yu-Gi-Oh! – accounted for $11,631,149 in sales in 2021. Pokémon, especially, has become a smash hit in 2021, beginning in January, when a First Edition Base Set Sealed Booster Box sold for $408,000 . Six months later, Heritage held its inaugural Trading Card Games event, which topped $3.4 million.

Video Games, a 2-year-old category at Heritage Auctions, likewise ran up a high score in 2021, posting $26,329,421 in sales – a 394.8% increase over 2020. The category made international headlines in July, when a magnificent sealed copy of Super Mario 64 sold for $1,560,000 during the auction house’s first stand-alone Video Games event to become the first game ever sold at auction to bring more than $1 million. That stunning result obliterated the previous world record, set just two days earlier when the auction house sold a copy of The Legend of Zelda for $870,000 , at the time the most ever paid for a video game at auction. 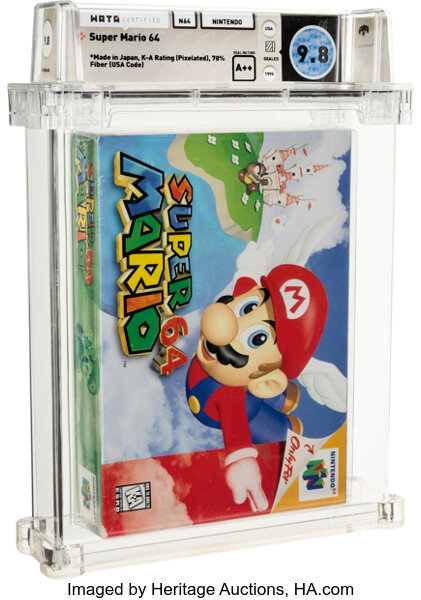 Heritage Auctions also held its most successful Entertainment & Music events ever in 2021 to tally $19,877,572 in total revenue, a 329% spike over last year’s figures. Journey guitarist Neal Schon’s instruments brought more than $4.2 million in a stand-alone summer auction , while Elton John’s longtime touring piano sold to the tune of $915,000 in July . Marilyn Monroe-related items, including outfits worn in such landmark films as Bus Stop and Seven Year Itch, realized more than $1.28 million in that same event. And just last month, Captain Kirk's phaser rifle used in a single episode of Star Trek sold for an out-of-this-world $615,000.

Heritage’s Americana & Political division had a remarkable year, realizing $6,040,455 for a 54.9% increase over 2020. So, too, did each of the auction house’s Luxury Lifestyle categories, which launched 15 years ago with a single jewelry auction. Today, the company has added Fine Wine andLuxury Accessories to its schedule of Jewelry and Timepieces auctions, and in 2021, these categories saw total prices realized hit nearly $43 million.

And not to be outdone, Luxury Real Estate saw an extraordinary uptick, jumping in revenue from $3,118,500 in 2020 to $14,135,000 this year. One of the year’s headliners came courtesy the late, great Trini Lopez, when the musician’s midcentury modern Palm Springs, Calif., estate sold for $2.1 million to nearly double the local listing agent’s estimate.

“We were equipped for this moment in history because of our legacy of innovation,” Ivy says. “The global pandemic has sped up what had been a gradual reliance on the internet to create a borderless and frictionless auction experience. We knew that we had the platform, the expertise and the emphasis on the experience of our client-collectors to provide what was needed when it was needed. I am so proud of our team, across offices and categories, for their effort and ingenuity in the face of an unprecedented challenge and for our ability to realize unprecedented results.”