The immense gold brick is too heavy to lift easily or gracefully – something about molecular density making it much heavier than its 54 pounds, but also, perhaps, something to do with the history it carries. 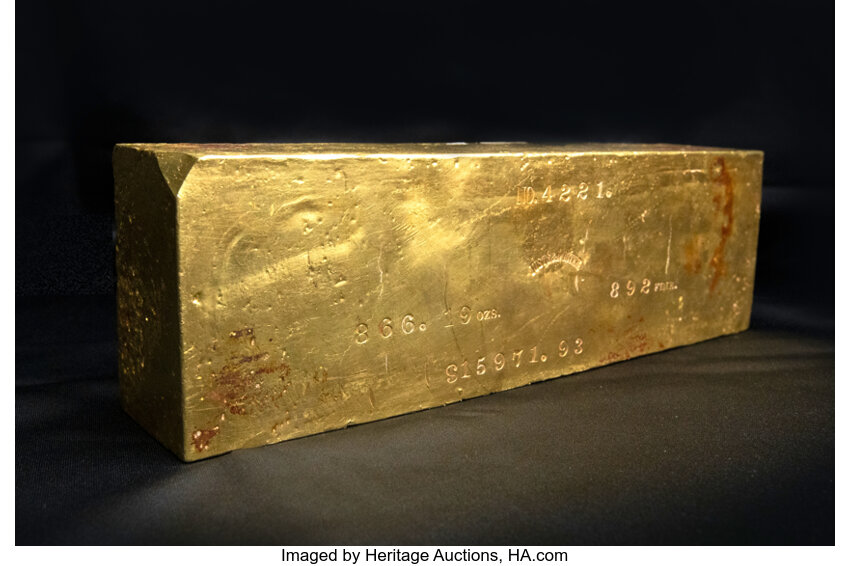 DALLAS, Texas (Dec. 16, 2021) – The immense gold brick is too heavy to lift easily or gracefully – something about molecular density making it much heavier than its 54 pounds, but also, perhaps, something to do with the history it carries.

Its tale began some 170 years ago in Northern California, the El Dorado of the American West that beckoned hunters, by steamer and wagon, who were promised that “fortune lies abroad upon the surface of the earth as plentiful as the mud in our streets,” as Horace Greeley wrote. This bar started as gold dust collected during that mad rush toward the Pacific, and was made whole by Justh & Hunter, a firm that weighed and assayed these shimmering flecks of fortune found by the Forty-Niners of the Gold Rush.

Had this massive bar, the largest Justh & Hunter in the world, successfully sojourned from California to New York (and then, likely, to Philadelphia) as initially planned, it probably would have been melted down, disbursed, disappeared. Instead it was swallowed by the Atlantic Ocean in the fall of 1857, and spent more than 130 years a mile and a half beneath the water’s surface and the crushed hull of sunken boat known as the Ship of Gold.

This ingot was second in size only to the famed Eureka brick, a 933-ounce ingot assayed by San Francisco firm Kellogg & Humbert, found on the SS Central America, and its disappearance was a part of an American tragedy. Its recovery, likewise, had the makings of myth – and mess, with the treasure-hunter at the heart of this story, Tommy G. Thompson, long behind bars made of steel.

Heritage Auctions will begin the coming year by offering this heavyweight slab of history during the Jan. 5-10 FUN US Coins Signature® Auction in Orlando .

The 866.19-ounce ingot remains bright yellow despite more than a century at sea; its markings, including the serial number (4221) and value ($15971.93) and make-up (892 fine) and the firm’s name, remain as crisp as the day the brick was stamped. And its significance cannot be undersold: This was the largest Justh & Hunter discovered in the wreckage of the SS Central America, the ship that was transporting tons of Gold Rush coins and ingots when a hurricane sank the sidewheel steamer some 200 miles off the South Carolina coast on Sept. 12, 1857. Its disappearance was this country’s worst peacetime disaster at sea.

Four-hundred twenty-five of the ship’s 578 passengers perished. And some 30,000 pounds of golf plummeted to the ocean floor, thought lost until their discovery in 1988 by an inventor named Tommy Thompson, the subject (and author) of several books and more than a few lawsuits.

For more than 20 years this mighty, mammoth ingot has been among the treasures from the SS Central America acquired by the California Gold Marketing Group, which is majority owned by Dwight Manley, once the agent for such NBA superstars as Dennis Rodman and Karl Malone.

Numerous gold ingots from the Central America have been sold before, among them a 174.04-ounce Harris, Marchand bar that brought $528,000 in January 2019.

But the one heading for auction in January is among the most sizable and significant ingots from the Ship of Gold ever made available to the public and the largest ever offered at auction. To put in perspective the contemporary value of this ingot, consider that in 1857, in New York City, the average pay for a carpenter was $1.79 per day. The 19th century work week was six days, so our average carpenter made $10.74 per week. At the stated value on this ingot of $15,971.93, this single ingot could pay the weekly wages of 1,487 carpenters. It is little wonder that the loss of the S.S. Central America shook the financial markets in New York and was a contributing factor to the Panic of 1857. 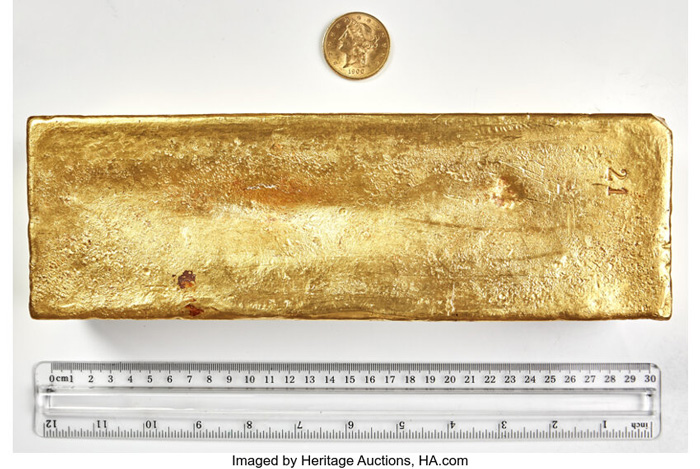 “It’s just staggering, from the size to the amount of gold to the sheer buying power of that one ingot in 1857,” says Heritage Auctions’ Chief Numismatics Cataloger Mark Van Winkle. “And then consider the total amount of value of gold that came out of Northern California during that 10-year period beginning in 1848. It explains a lot about the wealth of this country and what it represented to the people of the mid-19th century and the compelling reasons for people going to California. It’s just …”

Justh & Hunter was the Northern California firm established in 1855 by Emanuel Justh and Solomon Hillen Hunter – the former a lithographer from Hungary who found work as an assistant assayer in the new San Francisco Mint; the latter, a well-connected exporter from New York who had gone west in the spring of ’55. By 1856 business was so booming they had two branches, one in San Francisco and another 125 miles north in Marysville, Calif.

Yet despite their massive output, outside of some contemporary newspaper stories little was known about the size and scope of Justh & Hunter’s operation until 86 of their gold ingots were surfaced in 1988. That’s when treasure-hunter Tommy Thompson began recovering that which was lost when the seas devoured the Central America.

Thompson began as a hero of this story, as evidenced by his starring role in Gary Kinder’s 1998 book Ship of Gold in the Deep Blue Sea, about the disappearance of the Central America and Thompson’s evolution from engineering wunderkind to leader of the Columbus-America Discovery Group. Thompson and neighbor Bob Evans – who once described himself as “the chief scientist and historian of the project” – spearheaded the recovery operation, which involved sending down a remotely operated vehicle, the Nemo, on Sept. 11, 1988.

And what the Nemo found during that first journey to the bottom of the sea was astonishing.

Around Sept. 18, Evans told CoinWeek in 2018, “we dusted off an area where there was a huge concentration of treasure, which turned out to be the commercial shipment area or a portion of it, on the shipwreck, and we just see gold bars and coins carpeting the sea floor. That was just beyond belief. … We called it the ‘Garden of Gold.’ It literally looked like it.”

He spoke of seeing “sea creatures living on the gold,” of corals and sponges “actually attached to gold bars on the bottom.” Pictures of the initial find, published in Thompson’s own book America’s Lost Treasure, looked like something out of a movie.

“We had all privately imagined the moment we would find the treasure, but none of us ever thought that it would be so otherworldly in its splendor,” Thompson wrote. “The gold of the Central America looked like something out of a fairy tale beyond one’s wildest imagination. It sparked with brilliance in the first light to play off its surface.”

The recovery expedition continued into 1989, and this ingot was among those found on the ocean’s bottom. The book A California Gold Rush History refers to this bar as a “colossal size ingot,” and confirms that it “is the largest Justh & Hunter.”

Most of the treasures discovered aboard the Ship of Gold were eventually sold, among them the 80-pound ingot called Eureka sold in 2001 to a private collector for $8 million, making it “the most valuable piece of currency in the world,” according to the San Francisco Chronicle at the time.

But the story of the gold’s recovery did not have a happy ending for Thompson, who was sued by investors and members of the crew; stashed his cash in an off-shore account and went into hiding; then was found by federal agents in a Florida hotel room and extradited in 2015 to Ohio to reveal the whereabouts of the remaining gold coins found aboard the Central America. Six years later, Thompson remains in federal prison in Michigan for refusing to cooperate – “an unusually long time to be held in contempt,” The New York Times reported in December 2020.

What an extraordinary tale this ingot has to tell, one worth far more than worth its weight in gold.