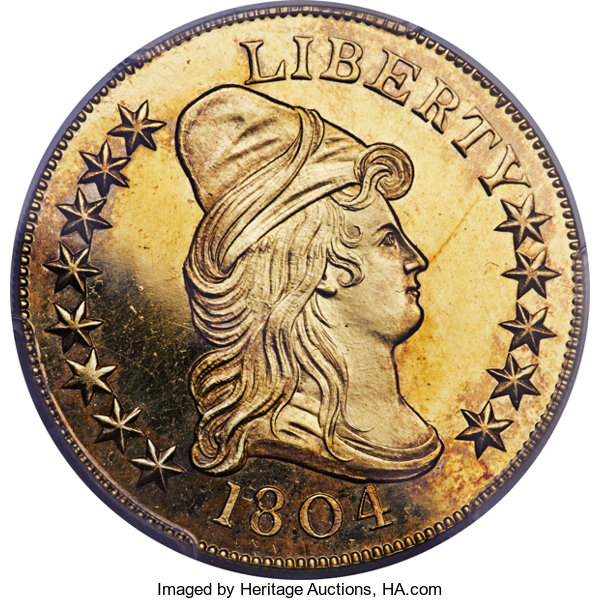 Total sales of U.S. coins and currency and World coins and paper money reached $90,687,367 during auctions scheduled in lieu of the Florida United Numismatists and the New York International Numismatic conventions . Both live events were canceled due to the COVID-19 pandemic; instead, their auctions took place in Dallas.

“Six coins broke the million-dollar mark and five world records were set – some by new clients who had never before purchased a coin before joining Heritage,” said James Halperin, Co-Founder of Heritage Auctions. “We are truly honored to be chosen to bring these collections to auction, as well as to serve our clients during this unprecedented era.”

Making headlines around the world, the $9.36 million sale of the 1787 New York-style Brasher Doubloon , EB on Wing, MS65★ NGC., CAC, set a world record for the most valuable gold coin ever sold at public auction. The example is the finest of all seven Brasher Doubloons known. The winning bidder spent more than $11.9 million to purchase not only the Brasher Doubloon, but five additional 18 th century coins struck by craftsman Ephraim Brasher – the first time the client ever purchased a coin at auction. Included in these was a 1786 Brasher Lima Doubloon , MS61 NGC. CAC, which ended at a world-record $2.1 million.

The Brasher Doubloons came to auction from the Donald G. Partrick Collection, one of several special collections on offer, a list that also included the Bob R. Simpson Collection, Part III. Four coins from the latter collection sold for more than $1 million to set world records:

Collectors broke out into a bidding war and pushed the auction price of a $20 bill featuring a Del Monte banana sticker to nearly $400,000.

The coveted banknote error sold to a bidder competing on Heritage’s live bidding platform, HA Live. Pre-auction bidding lifted the bids to $210,000. From there, the winning bidder outlasted a determined phone bidder and two other live internet bidders to push the final winning auction price to $396,000. The price sets a world record for any error banknote ever sold. This was just the third time the note had been offered at public auction since its discovery in 2004.

Likely the finest 1714 "Royal" 8 Escudos , Mo-J MS66 PCGS, from the Mexico City Mint, sold for $288,000. Almost certainly the finest known, sales of the past few decades have brought to light only a single other example, the Caballero de las Yndias, Ubilla-Sanchez representative, clearly pointing to the fact that even seasoned collectors of the series should not expect to find a more fitting piece for their collections anytime soon.

In addition to several important collections offered monthly on HA.com, Heritage Auctions’ next Signature sale of U.S. coins is Feb. 18-21 , which will include the Bob R. Simpson Collection, Part IV and more than 1,000 lots of special coins.