One of the highlights of the Harvey B. Jacobson, Jr. Collection, this is one of the few known examples of this popular early Liberty $10 gold piece. Of course, there are many other exciting coins on offer in the auction. 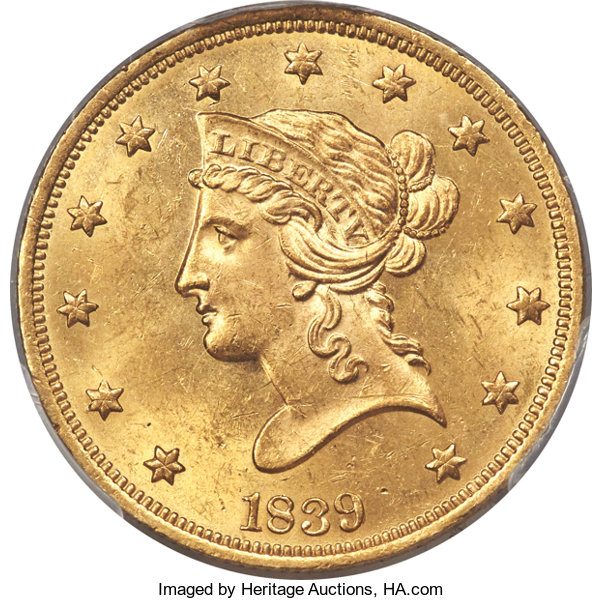 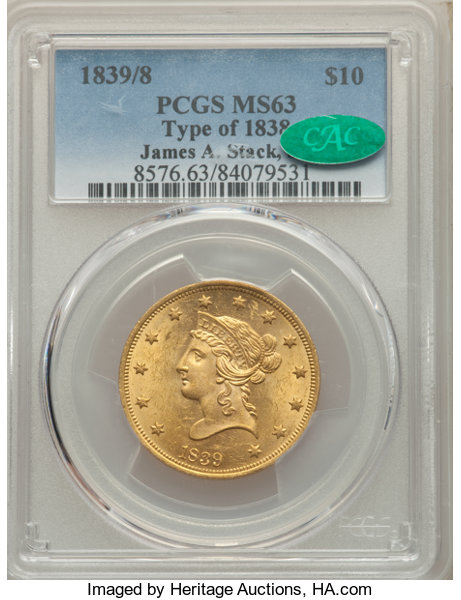 This 1839/8 $10 Liberty PCGS MS63 CAC pedigreed to the James A. Stack Collection will be auctioned in February by Heritage Auctions in Long Beach

Varieties of the 1839 eagle are known with the Liberty Head design as seen on coins from 1838 (along with large letters on the reverse), as well as with the Liberty Head design as seen in 1840 and small letters on the reverse. The Type of 1838 is considerably more available and a bit more common than one might expect. There are likely as many as 200+ pieces known and well-circulated examples are easily located. This issue is only marginally scarce in the lower grades of About Uncirculated although nice, problem-free pieces are not as easy to locate as they were a decade ago.

In Uncirculated, this is a rare coin with an estimated 10 coins known. This includes a few exceptional pieces, led by the famous PCGS MS66 auctioned by Heritage for $402,500 as part of the Gold Rush Collection in January 2005, and a PCGS MS65 that is owned by Oliver Jung and pedigreed to the Superior February 1998 sale, where it brought $253,000.

Our current February 20-23 Long Beach Signature Auction  features a  PCGS-graded MS63 coin from  The Harvey B. Jacobson, Jr. Collection of Liberty Eagles. This specific coin is pedigreed to the famous James Stack Collection, which many advanced collectors and dealers regard as among the greatest (and most unheralded) assemblages of American coins sold in the 1990s. It realized $28,600 as an unencapsulated coin in March 1995, and it was obtained via private treaty by Harvey Jacobson in 2012.

The surfaces are medium yellow-gold and there are no important or detracting marks on either side. Central strike details are strong on each side. This is an undisputed highlight of the Jacobson Collection and it represents an important opportunity for the type collector or the Liberty Head eagle date specialist to acquire an exceptional piece that is clearly in the Condition Census both for the date and for the type.