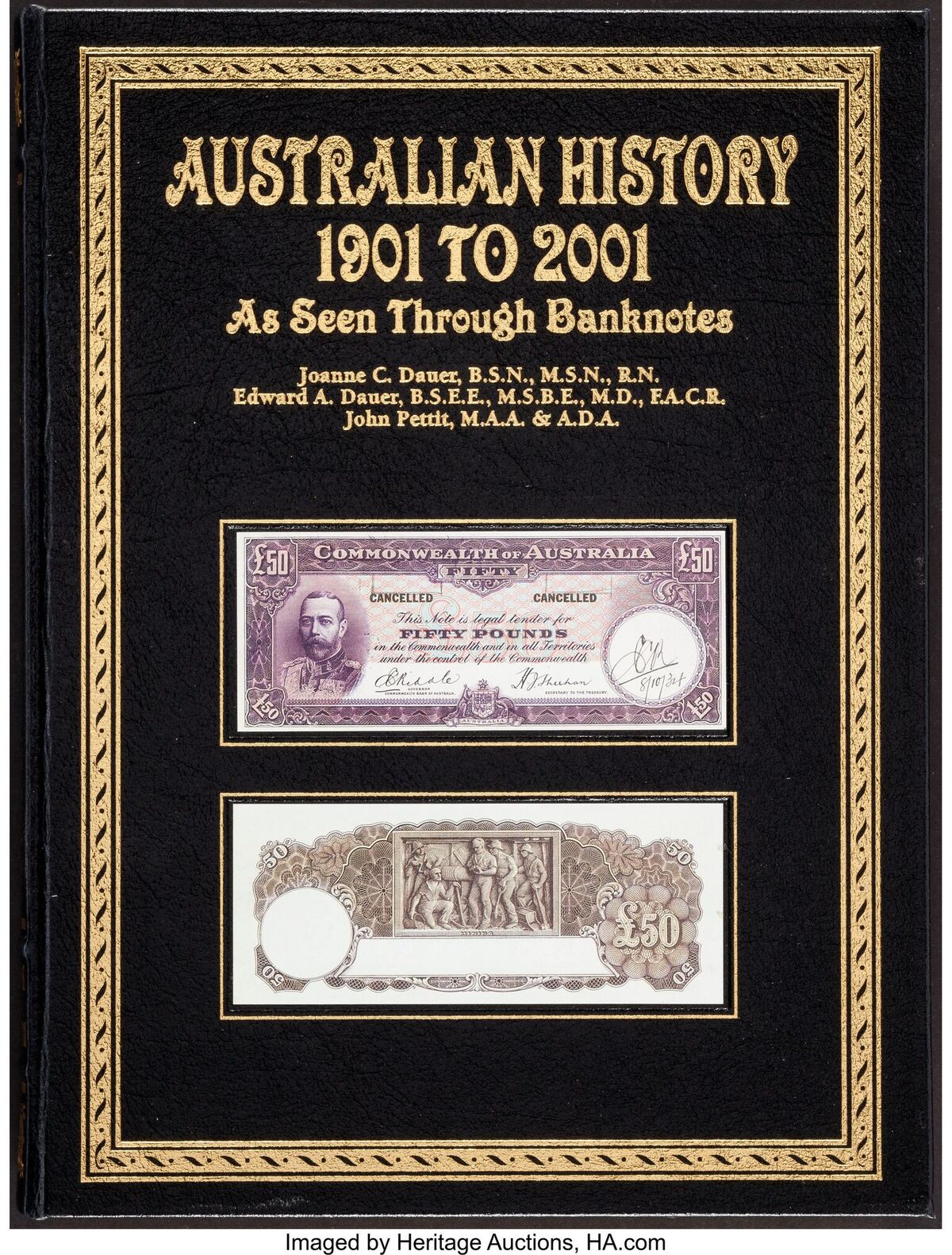 The 158 notes come from the collection of Drs. Joanne and Edward Dauer, who have written two books, including Australian History 1901 to 2001 As Seen Through Banknotes – signed copies of which are available in the auction. The foreword was written by Ian Macfarlane, a former member of the Australian House of Representatives.
“Other collections of Australian notes have been brought to auction before, of course, but this is the finest graded collection ever offered,” Heritage Auctions Currency Auctions Director Dustin Johnston said. “The quality of this collection is unmatched. The Dauers have been able to compile a nearly complete set of Australian notes since 1901, including many elusive World War I ‘emergency notes.’”

The Dauers’ collection started after their 1982 honeymoon to Australia sparked a love for the country that has grown over more than three decades and roughly 30 return trips each has made to the country. Also appealing, Edward Dauer said, was the fact that not many people were collecting Australian banknotes. The Australian History book is the second the Dauers have co-written; they previously wrote a similar tome about seeing American history through U.S. currency.

“It’s very hard to part with these banknotes, or any collectibles,” Dr. Edward Dauer said. “But we took the philosophy that we are only custodians. All we can do is hold them, and then pass them on to the next group of collectors.”

Among the top lots in the Dauer Collection is a First Commonwealth 10 Shillings Presentation Note with Letter (estimate: $70,000-90,000 USD). A historically important note from the first series of Australian currency issued by the Commonwealth Bank, this note boasts a low serial number (M000086). The first notes in this design (M000001 to M000100) were reserved for high-ranking officials – the first three to Governor-General Lord Denman and his daughter and son, Nos. 4 and 5 to Prime Minister Andrew Fisher; the rest were open to bidding by parliamentarians and high-ranking officials. This note includes the original signed letter from the Secretary to the Treasury George T. Allen and is addressed to G.H. Wise, Esq. PMG population reports list two examples in this grade, with none finer. The other note in this grade, with the Serial Number 89, also is offered in this auction.

A Commonwealth of Australia £20 ND (1918) Pick 7b R65a (estimate: $70-000-90,000) is a stellar example of this higher-denomination note, which has an EPQ designation. With non-bold serial numbers ranging from X040744 to X167283 and Cerutty/Collins signatures, this example belongs to the second variety of this note, which depicts timber cutting on Tasmania’s Bruny Island on the reverse. Only 421,500 of these notes were printed; of those, only 506 were left outstanding on the books of the Commonwealth Bank, according to a census of these notes in 1945 which removed legal tender status of notes above £10. This example is among the finest of the notes that are unaccounted for, with perhaps as few as 15 of these once-in-a-generation notes known to carry the PMG Extremely Fine 40 EPQ grade.

This Commonwealth of Australia £1 ND (1914-1915) Pick 1B R19F Overprint on Australia A111a (estimate: $60,000-80,000) is believed to be the finest of about 40 copies still known to exist of a popular note with a rich history. Between 1910 and 1914, banknote issuing rights were transferred from private banks to the Commonwealth Bank. During that time, notes like this one from the English, Scottish and Australian Bank were pressed into service because of the lack of banknotes in the beginning of World War I. The lone finest example listed in the PMG population report, the colors and condition of this example made it a worthy addition on page 120 in the Dauers’ book on Australian banknotes.

An Commonwealth of Australia £100 ND (1924) Pick 9c R69b (estimate: $60,000-80,000) is a brilliant note with multicolor underprint on both sides and clear intaglio features. This high-denomination note is from the third variety, with a bold Z prefix and Cerutty-Collins signatures. The second-highest denomination behind just the £1,000 note, this example that once was part of the Amon Carter Collection is the highest available to collectors.

The finest graded Renniks 67a 50 pound note, this Commonwealth of Australia £50 ND (1918) Pick 8b R67a (estimate $60,000-80,000) is one of just two surviving R67a notes known in existence. A flock of sheep at Bungaree in South Australia adds to the note’s exceptional visual appeal. Like other denominations over £10 in this series, these were subject to recall after World War II, after which they lost their legal tender status. This example is from the second series, with Cerutty-Collins signatures and small serial numbers between Y083846 and Y176000. This stunning note appears on page 235 of the 27th edition of the Renniks Australian Coin and Banknote Guide and on page 132 of the Dauers’ book on Australian currency.

Other top lots from the Dauer Collection include, but are not limited to:

The Internet’s most popular auction-house website, HA.com, has over one million registered bidder-members and searchable free archives of four million past auction records with prices realized, descriptions and enlargeable photos.