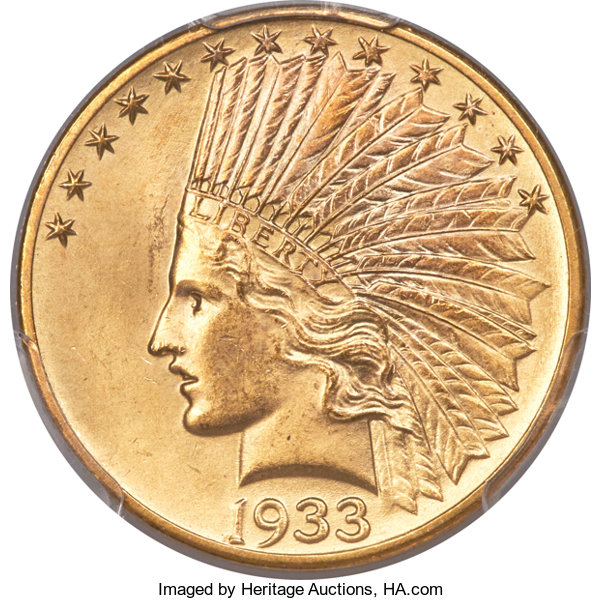 “Although the Long Beach Expo was cancelled due to the pandemic scare, we were glad to relocate the auctions to HA.com,” said Jim Halperin, Co-Founder of Heritage Auctions.

The stunningly rare final ten dollar Issue of a 1933 Indian Eagle , MS65 PCGS, sold for $408,000. The coin is one of perhaps 30 to 40 examples known to exist and comes with a storied history. Almost the entire mintage of 1933 Wagles were melted soon after the coins were struck, when the Gold Recall of 1933 discontinued regular-issue U.S. gold coinage forever. The U.S. gold coinage for 1933 consisted of only the eagles and double eagles struck at the Philadelphia Mint, and only one 1933 double eagle is legal for collectors to own, making the 1933 Indian eagle the only collectible gold coinage issue from this historic final year of production.

A close second to the 1933 issue, the second rarest Indian Eagle is the ten dollar 1907 Rolled Rim Variety , MC65 PCGS, which sold for $240,000. From the beginning of the Indian Eagle series, the example was minted in an effort to keep Augustus Saint-Gaudens’ original high relief design, but improve upon the stacking issues that arose with the original Wire Rim variant. The rim was strengthened, but the resulting coins did not have sharp details, and all but 50 of the 31,500 pieces struck were melted – a tiny amount.

The Single-Finest Certified Example of an 1895 Liberty Twenty , PR67 Ultra Cameo, NGC, ended at $234,000. Experts estimate the coin is one of roughly 16 to 24 pieces that remain from just 51 proof Liberty double eagles that year. Rarely seen at auction, two specimens are included in the National Numismatic Collection at the Smithsonian Institution and another is preserved in the collection of the American Numismatic Society. The auctioned coin was a magnificent Superb Gem proof, the single-finest certified example at either of the leading grading services, exhibiting razor-sharp definition throughout, with intricate detail on Liberty's hair and the star radials.

An example of the 1907 twenty dollar High Relief , PR67+ NGC, retained exceptional surface preservation, leading to its $168,000 high bid. As expected, each side displays a pronounced satin-like texture and the strike is full. The bright yellow-gold surfaces show a slight tinge of reddish patina, leaving an outstanding proof High Relief and one of the finest Heritage has ever brought to auction.

An additional highly sought-after coin made a rare auction appearance: a 1796 B-2 Quarter , MS63 PCGS, from the mintage of the first official quarter dollars struck by the U.S. Mint. As much as the 1796 quarters may have been unwanted at the time of release, certainly they are prized now, no matter the grade. A Mint State coin, of course, makes ownership that much sweeter. Offered from The Warshaw Family Collection, Part II, the coin sold for $150,000.

Among the single-owner and special collections offered during the auctions, the June 5 Pinnacle U.S. Rarities Collection Currency Auction added close to $900,000 to the weekend’s total. The collection’s highlight was a Series 1891 $50 Silver Certificate, Fr. 334 , graded Superb Gem New 67PPQ by PCGS. This and one other note are the finest known of fewer than 50 extant examples. It sold for $54,000.