The largest coin dealer in the world is the United States Mint. Purchasing coins directly from the U.S. Mint can be a very cost-effective method to add coins to your collection. If you're only looking at them for investment purposes, this can be a risky business. 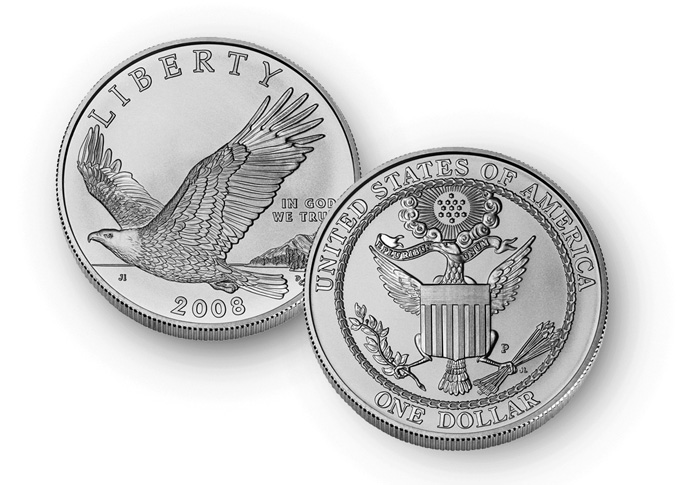 Investing in United States commemorative coins is a tricky business. Some coins have precious metals, such as gold and silver, and can be greatly influenced by the current market price of these metals. But the two major factors that determine the value of a coin are supply and demand for a particular grade. Both of these will change over time and will lead to changes in a coin's value.

Some people invest for the short term by buying coins directly from the U.S. Mint and quickly flipping them for a quick profit. Unfortunately, this is risky and can also lead to a loss of capital. Other people will invest for the long-term and hold onto their commemorative coins for many years. With a few exceptions, this usually turns out to be a bad investment strategy.

The economic forces that drive the coin market follow the same laws of supply and demand that drive any other free market. As the supply of a certain good increases, the price will fall. Conversely, as demand for a good increases, the price will also increase. Many other factors go into determining the actual price that a dealer will charge for a particular coin, but supply and demand influence the coin's value the most.

When the United States Mint first issued commemorative coins, the supply was virtually unlimited. There may be laws that dictate only 350,000 or 500,000 coins may be minted, but those limitations are rarely exceeded. Additionally, these laws usually state that a coin can only be sold for a period of one only year. After which, all unsold coins are eventually melted.

There are some notable exceptions, such as the 2011 25th Anniversary Five Coin Silver Eagle Set that had a production limit of 100,000 sets and sold out in a matter of hours. 2021 Morgan dollars with privy marks representing the New Orleans and Carson City Mints became unavailable almost immediately at the beginning of their pre-order period in May 2021.

Demand is also influenced by the topic that a coin commemorates or the design that is embodied on the coin. In 1995 and 1996, the United States mint produced a series of silver one-dollar coins to commemorate the 1996 Olympic Games in Atlanta, Georgia. In some instances, almost ten times more proof coins were sold than the uncirculated version. Since the Mint no longer makes these coins, the demand for uncirculated Olympic coins must be met by a very limited supply. Hence, the price has increased proportionately.

In the mid-1980s, third-party grading and authentication companies started to emerge. For a fee, you could send your coins to these companies, and a professional numismatist would verify the authenticity of your coin and render a professional opinion on the coin's grade. The coin would then be encapsulated in a hard tamper-evident plastic holder displaying identifying information and the coin's grade. The two leading third-party authentication services are Professional Coin Grading Service (PCGS) and Numismatic Guarantee Company (NGC).

These two companies started an online competition among coin collectors to see who could build the best set of coins. Known as registry sets, coin collectors can submit their coins to be professionally graded and encapsulated and then register their coins on either PCGS's or NGC's website. The higher the grade of the coin, the more points it is worth. Sets are then ranked against each other by their total points. The popularity of registry sets among coin collectors has greatly increased the demand for high-end certified coins.

The advent of registry sets has driven the demand for MS-70 and PR-70 coins to new levels that nobody ever expected. When coins are first released by the United States Mint, the supply of "perfect" MS-70 or PR-70 coins is very low. Hence, the cost of being one of the first to own one of these perfect coins is very high (high demand = high price). As more people submit their coins to be professionally graded, more and more coins receive the MS-70 or PR-70 grade. Therefore, the supply will increase, and the laws of economics will cause the price to decrease. Eventually, the market will get saturated, and prices will stabilize.

Take, for example, the 2008-P Bald Eagle Silver Dollar. The uncirculated version of this coin had an original issue price of $37.95. In August of 2008 (while they were still being sold by the U.S. Mint) an MS-70 specimen was selling for $144.00, while an MS-69 specimen was selling for $66.00. Currently, prices have stabilized and are widely available at coin shows and online dealers.

As you can see from the chart below, it takes approximately twelve months for the market to stabilize after a coin is issued. Other market demands can also influence the price of coins. A notable exception is the popularity of the 2009 Abraham Lincoln Bicentennial Silver Dollar that was coupled with the four new reverses on the Lincoln cent in the same year. Another notable exception is the 2001-D Buffalo Silver Dollar that was originally issued for $32.00. 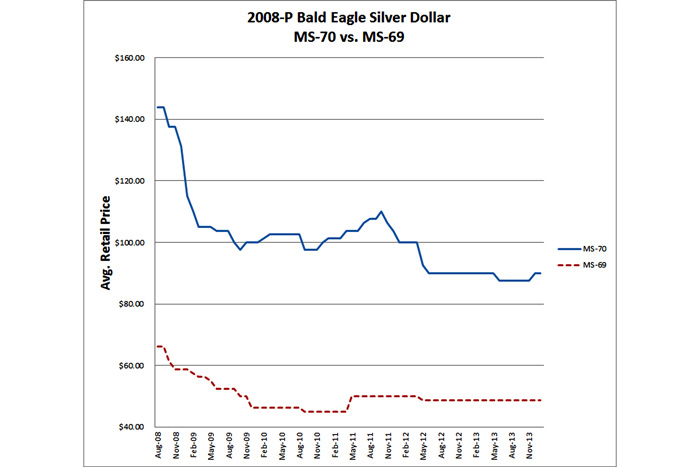