The Professional Numismatists Guild announced its 2022 awards on PNG Day, April 27, in conjunction with the Central States Numismatic Society convention. 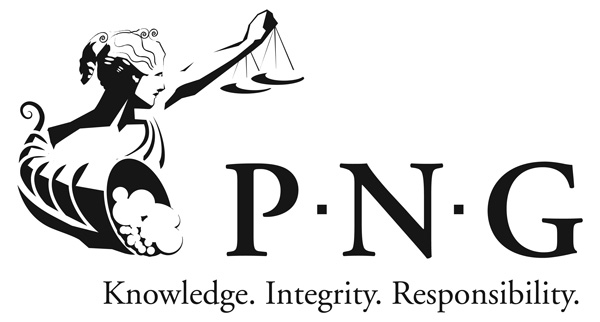 (Schaumburg, Illinois) April 28, 2022 – The Professional Numismatists Guild (www.PNGdealers.org) has named its annual Lifetime Achievement Award in honor of former PNG President Harvey G. Stack of New York City who passed away earlier this year at the age of 93. The 2022 recipient of the newly-named award is veteran California dealer Jack H. Beymer.

“Harvey Stack was an icon of the numismatic world, a respected dealer who emphasized the educational importance as well as enjoyment of collecting. He joined PNG in 1978 and served as our President from 1989 to 1991. The PNG Board voted unanimously to recognize his outstanding achievements by adding his name to one of our most important annual awards,” explained PNG Executive Director Robert Brueggeman.

The Harvey G. Stack Lifetime Achievement Award is presented by PNG to a numismatist for his or her extraordinary devotion to numismatics and who, over their lifetime, significantly contributed to the hobby or profession. This year’s recipient, Jack Beymer, has operated Big Oak Plaza Coins in Santa Rosa, California since 1971 and is known nationwide for his passion for the hobby and profession. He joined PNG in 1975.

That award and other 2022 PNG honors were announced at the organization’s awards reception held in conjunction with PNG Day, April 27, at the Central States Numismatic Society convention in the Chicago suburb of Schaumburg, Illinois.

The Robert Friedberg Award, presented to an author in recognition for an outstanding book or other literature, was given to Rusty Goe of Southgate Coins in Reno, Nevada, author of The Confident Carson City Coin Collector. This acclaimed three-volume, 2,500-page reference work is about the historic Nevada branch mint and coins struck there from 1870 to 1893.

The Significant Contribution Award was presented to James A. Simek of NumisGraphic Enterprises in Westchester, Illinois for his exceptional, beneficial efforts over the years on behalf of PNG as well as the profession and the hobby. Simek joined PNG in 1980, has been a member of the PNG Board since 2009, and has served as PNG Secretary since 2015. 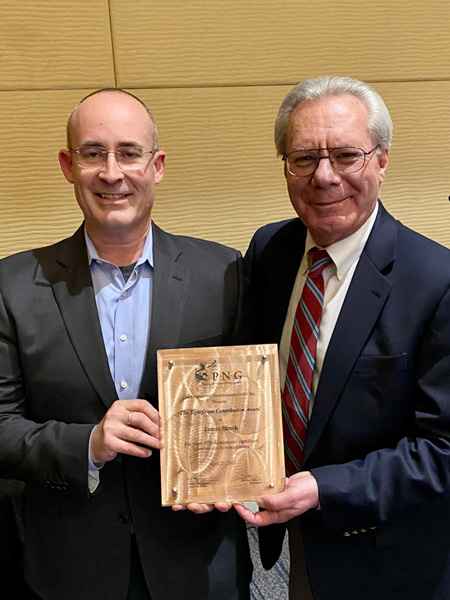 The Sol Kaplan Award that recognizes efforts and contributions to combat crimes against the numismatic community was presented to Jack D. Young of Dayton, Ohio for his help to fight fraud and thievery. Young has extensively assisted researchers, third-party grading services, online shopping platforms, and law enforcement in the identification of deceptive fakes offered in the marketplace and is the founder of the Facebook counterfeit watch group, “The Dark Side.” 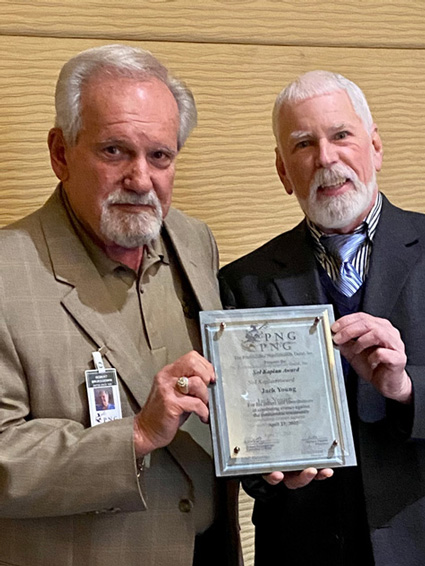 In a related honor, the Anti-Counterfeiting Educational Foundation ( www.ACEFonline.org) presented its annual Alan Kreuzer Memorial Award to Chris Hersey, Senior Special Agent for the United States Department of the Treasury Office of Inspector General. ACEF Director of Anti-Counterfeiting Doug Davis said that Agent Hersey has been instrumental in assisting ACEF in coordinating cases with the different levels of federal agencies responsible for the investigation of counterfeit coins and precious metals. He also assisted ACEF in conducting anti-counterfeiting and numismatic crimes educational seminars for law enforcement in California and Texas. 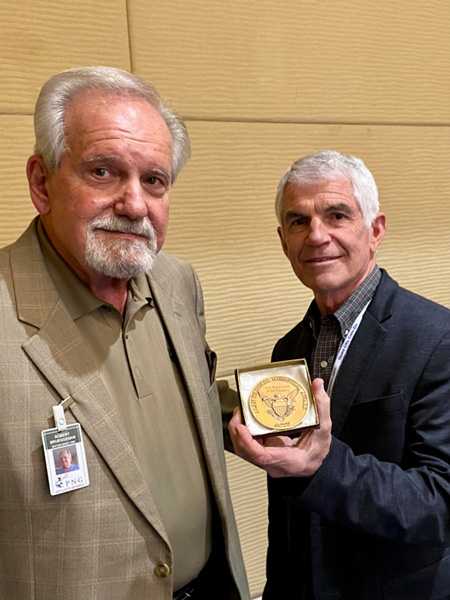 Berk, who served as PNG President from 2001 to 2003, joined PNG 51 years ago in 1971, however, last year’s awards ceremony was not held because of the pandemic, so the formal recognition was delayed until this year’s event.

The Professional Numismatists Guild is a nonprofit trade association composed of the country’s top rare coin and paper money dealers who must adhere to a strict Code of Ethics in the buying and selling of numismatic merchandise. The organization also has an Accredited Precious Metals Dealer program (www.APMDdealers.org).