Active bidding from both public auctions and dealer buy lists propels many upward price movements in this issue. The United States currency market remains robust, and while we have not yet approached the exuberance (over-exuberance?) of the 2008 market the climb has been steady now for nearly one year. 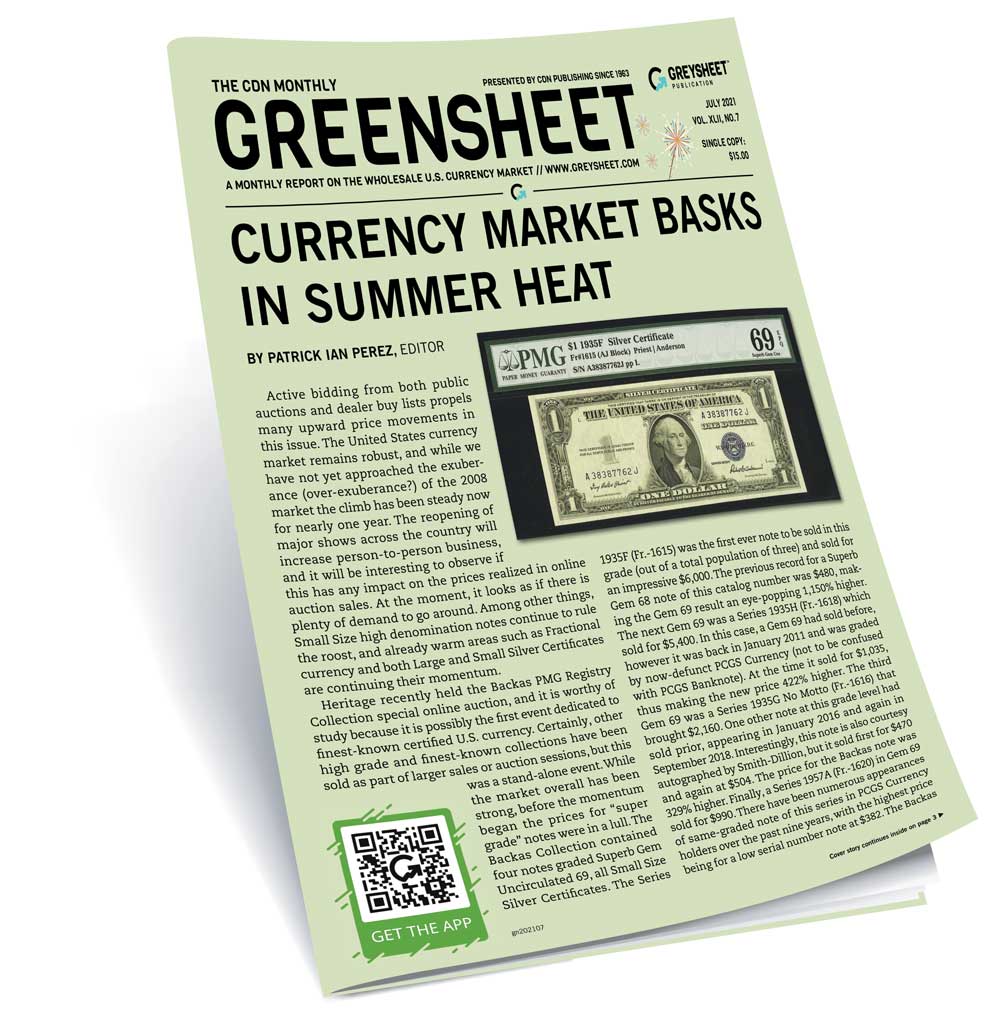 Cover of the July Greensheet

Cover of the July Greensheet

Active bidding from both public auctions and dealer buy lists propels many upward price movements in this issue. The United States currency market remains robust, and while we have not yet approached the exuberance (over-exuberance?) of the 2008 market the climb has been steady now for nearly one year. The reopening of major shows across the country will increase person-to-person business, and it will be interesting to observe if this has any impact on the prices realized in online auction sales. At the moment, it looks as if there is plenty of demand to go around. Among other things, Small Size high denomination notes continue to rule the roost, and already warm areas such as Fractional currency and both Large and Small Silver Certificates are continuing their momentum. 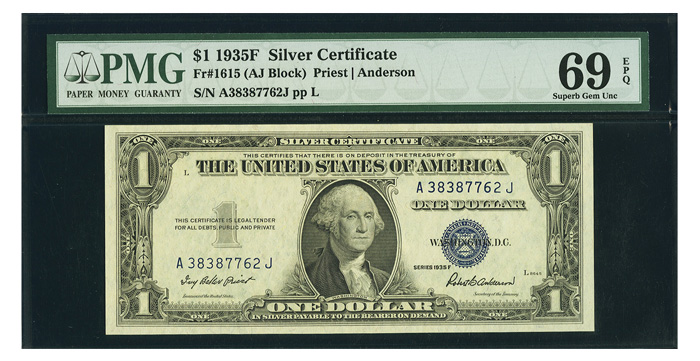 Heritage recently held the Backas PMG Registry Collection special online auction, and it is worthy of study because it is possibly the first event dedicated to finest-known certified U.S. currency. Certainly, other high grade and finest-known collections have been sold as part of larger sales or auction sessions, but this was a stand-alone event. While the market overall has been strong, before the momentum began the prices for “super grade” notes were in a lull. The Backas Collection contained four notes graded Superb Gem Uncirculated 69, all Small Size Silver Certificates. The Series 1935F (Fr.-1615) was the first ever note to be sold in this grade (out of a total population of three) and sold for an impressive $6,000. The previous record for a Superb Gem 68 note of this catalog number was $480, making the Gem 69 result an eye-popping 1,150% higher. The next Gem 69 was a Series 1935H (Fr.-1618) which sold for $5,400. In this case, a Gem 69 had sold before, however it was back in January 2011 and was graded by now-defunct PCGS Currency (not to be confused with PCGS Banknote). At the time it sold for $1,035, thus making the new price 422% higher. The third Gem 69 was a Series 1935G No Motto (Fr.-1616) that brought $2,160. One other note at this grade level had sold prior, appearing in January 2016 and again in September 2018. Interestingly, this note is also courtesy autographed by Smith-Dillion, but it sold first for $470 and again at $504. The price for the Backas note was 329% higher. Finally, a Series 1957A (Fr.-1620) in Gem 69 sold for $990. There have been numerous appearances of same-graded note of this series in PCGS Currency holders over the past nine years, with the highest price being for a low serial number note at $382. The Backas note brought $990. High grade Small Size Star Notes was another area that was in what could be called the doldrums two years ago but there were some major outperformers in the Backas sale. One such example is the Series 1935H Silver Certificate (Fr.-1618*). Previously, Stacks Bowers had sold two different examples graded PMG Gem 68 (both from the same pack) in June 2015 and April 2016 for the same price of $352. The Backas note, also PMG Gem 68, sold for $4,320! The math shows this as an 1,127% increase. Of course, not every note set records like this, but there were many other strong results. Three examples are a Series 1934 Silver Certificate (Fr.-1606) graded Gem 67 at $1,080, the highest price in seven years; a Series 1935G With Motto Star Note (Fr.-1617*) also in Gem 67 at $660 which is higher than the two most recent sales for the same note in Gem 68; and a Series 1935 Silver Certificate (Fr.-1607) in Gem 67 that sold for $1,020, which is also higher than what notes at the Gem 68 level have sold for. What are we to conclude from these results? First, it is clear that anything that is fresh to the market and special is being chased by multiple potential buyers, creating conditions for price records. Second, it is possible a fair amount of new buyers have entered the market as crossover collectors. With some being priced out of U.S. coins as they continue to rise they may turn to U.S. currency as an equal alternative. It is also possible that new buyers are coming in even from other non-numismatic collectible fields. Collectors today are realizing the importance of diversification, and U.S. currency ticks a lot of boxes: it is visually appealing, has a long and stable market history, and is a wonderful store of value. Ironically, the now-mainstream unease regarding inflation of the dollar and currency in general is spurring the collecting of scarce paper money.

Heritage will also be offering the second part of the Mike Coltrane Collection as a special online-only auction. Part one of this collection focused mostly on Colonial and other paper money from North Carolina and was largely successful. This part is broader in terms of offerings, including Large Size, Fractional, other Colonial, and even a selection of War of 1812 notes.

Subscribe to July 2021 edition of Greensheet for the industry's most respected pricing and to read more articles just like this.