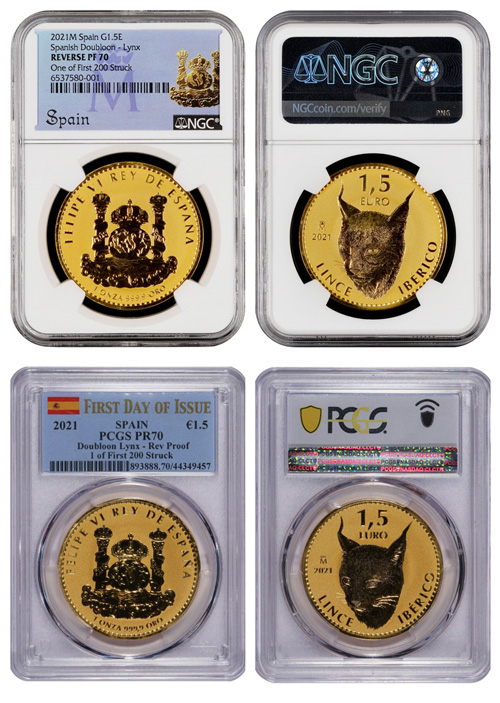 Kagin’s Inc. of Tiburon, California has been appointed the exclusive U.S. distributor for these coins and are now making them available for sale.

This first issue features the Iberian Lynx struck as a Reverse Proof 1-ounce in 999.9 fine gold coin and denominated € 1.5.

The coin’s obverse features the famous Columnarios--the Pillars of Hercules design representing the joining of the two Old and New World hemispheres, with the two globes crowned over the sea, and the motto “PLVS VLTRA” appearing on ribbons mounted on opposite pillars. This image, prominently depicted on the Spanish silver “pieces of eight”, was arguably the world’s most recognizable coin design for over two hundred years. Many consider them to be the first global coinage and the precursor of the American Dollar sign ($).

The reverse depicts the head of an Iberian lynx, the face value of € 1.5, the year of issue (2021) and the crowned symbol of the Spanish Royal Mint.

“We are very honored to be given this opportunity to offer these beautiful first bullion coins of Spain,” declared Donald Kagin, Ph.D., owner of Kagin’s, Inc. “As we did with the Saddle Ridge Hoard treasure coins, we want as many collectors as possible to be able to purchase these historically important coins.”

The coins will only be available from distributors and not from the Spanish Royal Mint.

Kagin’s will be offering on a “first come” basis, these first strikes and first day issue coins that have been certified by PCGS or NGC as PR-69 and PR-70.

The company states that the remaining 8,000 uncertified encapsulated 2021 reverse proof coins will be priced at the daily London spot gold in euros plus 10% while supplies last.