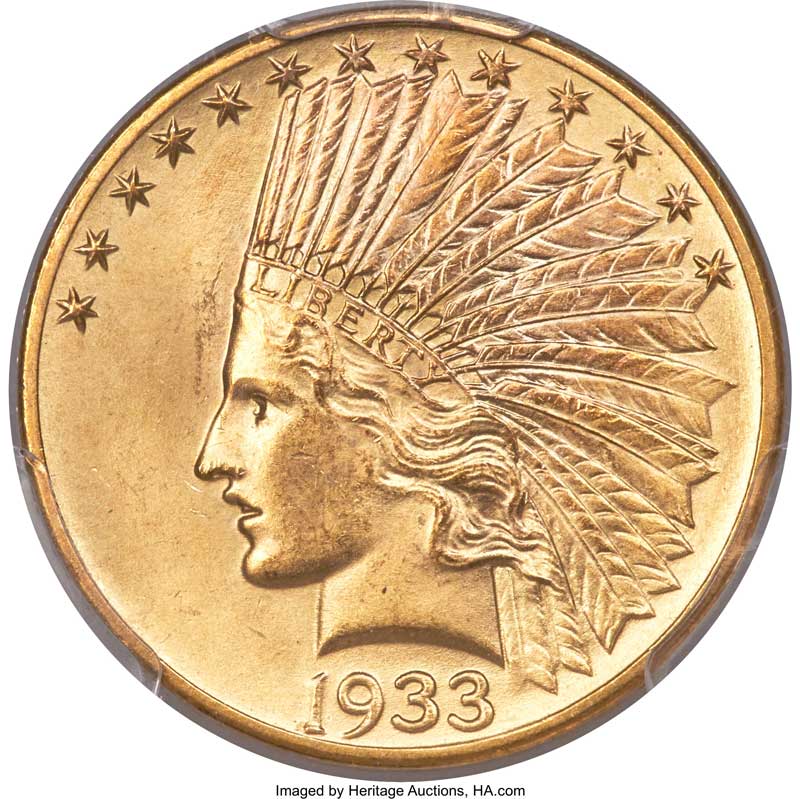 Heritage just sold a 1933 $10 gold piece—the only gold coin that can be readily traded on the open market from this year—for an astonishing $360,000 in the April Central States sale last week. If you missed your chance, another rare opportunity is presented at Heritage’s June Long Beach Auction! 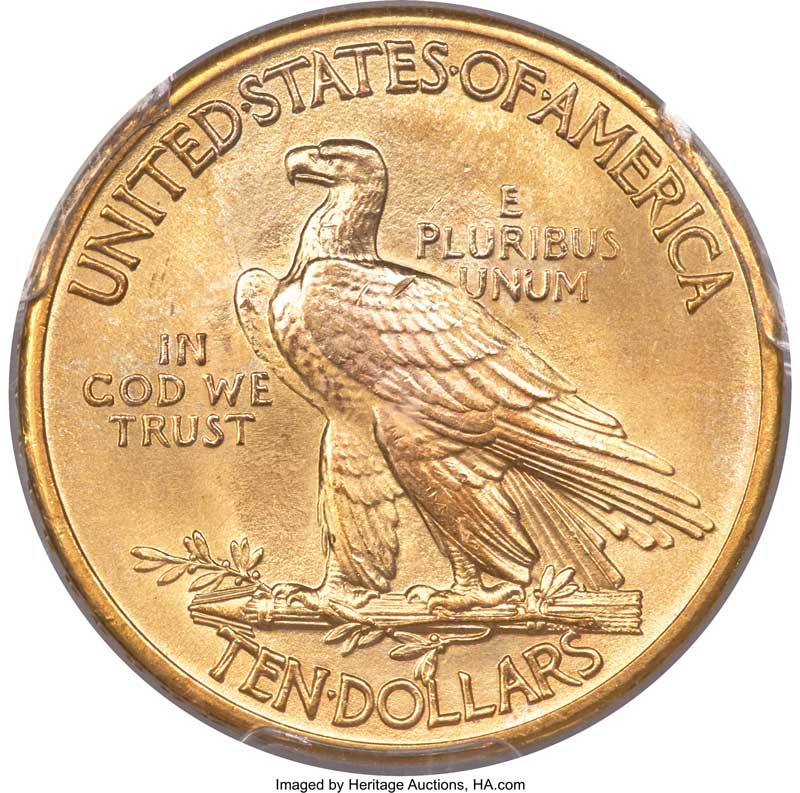 The reverse side of the 1933 $10 Eagle which will be sold in conjunction with Heritage's June 2020 Long Beach Auction.

President Roosevelt had declared that the country was no longer going to be on the gold standard after 1933, so the production of gold coins for circulation screeched to a halt. Also, with most 1933 gold coins ($20 gold pieces) currently classified by the US Government as illegal to own, a 1933 $10 Indian offers a rare opportunity to acquire a piece from this year that will not send you to a courtroom. This coin has a fascinating story of how something with a mintage of around 300,000 coins turned out to have less than 50 pieces known in all grades—our catalogers estimate only around 30 to 40 pieces survive….a tiny fraction of the original mintage.

Our catalogers explain what makes these coins not only so scarce, but also so interesting: "The accepted mintage figure for the 1933 gold eagles is 312,500 coins, as published in the Guide Book and various other sources. While that is accurate as far as it goes, it is only half of the story. Nearly all of the original production was melted shortly after the coins were manufactured, due to the Gold Recall of President Franklin D. Roosevelt.

The year 1933 opened normally at the Philadelphia Mint, although the country was in the depths of the Great Depression. The Mint's production of the year's eagles totaled 312,500 pieces in January and February. Although for many years it was thought that perhaps two dozen of those coins were released in the normal order of business, it is now believed that from 30 to 40 specimens escaped in this way. Presidential Order 6260, issued in March, officially halted the release of gold coins from the Mint.

All known examples of the 1933 ten dollar are Uncirculated -- but Gem examples such as the present specimen are quite rare. Mike Fuljenz writes in Indian Gold Coins of the 20th Century concerning the 1933 eagles:

"For some reason, this date is usually seen with scattered deep marks. The typical 1933 may not have as many abrasions as on the typical 1932 but the marks seen on the 1933 are often located on the prime focal points and they can be fairly detracting. More often than not, the marks are located on the obverse and on a few pieces they are positioned squarely on the jaw or cheek of the Indian."

Acquisition of any 1933 eagle has been considered a badge of accomplishment, one of the coins that separate great collections from world-class ones.”

Don’t miss this opportunity to add your name to the list of elite collectors who have owned one of the handful of examples known today, graded PCGS MS65 [link to auction lot].