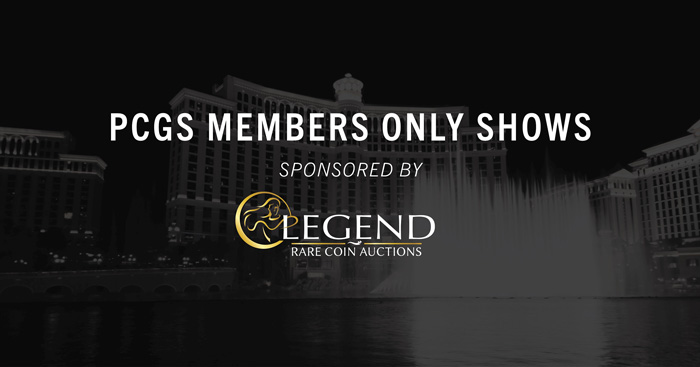 “We are excited to continue working with Legend Rare Coin Auctions,” says PCGS Interim President Stephanie Sabin. “Our relationship with Legend goes back decades, and they have been such wonderful promoters not only of PCGS Members Only Shows but also of the hobby in general. Their auctions shine a light on some of the hobby’s most extraordinary coins, including storied seven-figure rarities such as the 1894-S Barber Dime, which they recently handled.”

“Legend Auctions has enjoyed a successful relationship with PCGS being the official auctioneer of the Members Only Shows,” remarks Legend Rare Coin Auctions Owner and President Laura Sperber. “We see sustained strong growth with PCGS’ worldwide audience. That’s exactly what we are seeking to expand the scope and eventually the size of our sales – the more action, the better coins we receive for sale.”

Sperber says it’s a “win-win” for both Legend Rare Coin Auctions and PCGS. “Plus, we love the PCGS Members Only Shows. Our boutique size is perfect for them. Attendance and the business transacted can rival major shows. We've met so many new people and picked up some lasting great customers. Attend one of these shows, its worthy of your time!”

Professional Coin Grading Service (PCGS) is a third-party coin and banknote grading company that was launched in 1986. Over 35 years, PCGS has examined and certified more than 47 million U.S. and world coins, medals, and tokens with a combined value of over $46 billion. For more information about PCGS products and services, including how to submit your coins for authentication and grading, please visit www.PCGS.com or call PCGS Customer Service at (800) 447-8848.