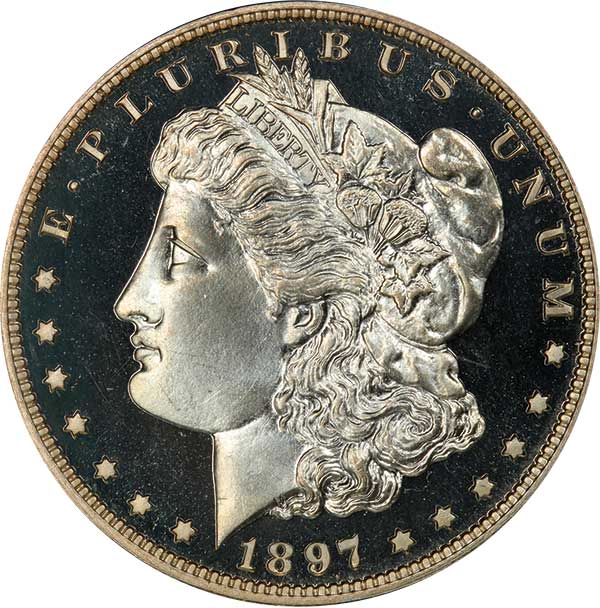 Legend Rare Coin Auctions presented a powerful auction in conjunction with the July PCGS Members Only Show on Thursday, July 26, 2018. With a crowd of bidders in the room, large numbers of bidders online, and on the phone, many records fell. With 604 lots, the Regency Auction 27 was the largest single-day auction in the firm’s history and featured several important named collections but kept its boutique appeal. While the summer used to be considered a slower-paced time of year, as the firm’s president, Julie Abrams, explained this year, the market really seems to have heated up in July:

“Despite the blistering 113 degrees heat outside — or perhaps to some extent because of it — the auction room filled up with so many bidders that auction staff had to scramble to find more chairs before the auction started.

Like the May Regency Auction, the July Regency Auction was anchored by a world-class collection of Morgan dollars. The RanJack Collection began the auction with a very strong start. The premium quality of the coins in the collection, a nearly complete set of Morgan dollars, attracted fierce bidding from the moment the sale was posted online nearly at the end of June. As soon as bidding began on Lot 1, an 1878 7 Tail Feather, Reverse of 1878 in PCGS MS66+ CAC, the action was intense! After a bidding war that included no fewer than seven bidders, it ended up realizing a record-shattering price of $43,475, nearly triple the previous record for the issue! This was not the only coin to bring strong to record prices during the RanJack Collection portion of the evening. Please note all prices reported include the 17.5% buyer’s premium.

“Leading off the sale was the RanJack collection of Morgan Dollars, which was extremely well received by enthusiastic bidders. As has become the norm at Legend, the collection proved that a masterfully assembled collection will attract all of the right bidders, especially when presented in a small, focused, high-quality sale. Buyers love not having to sort through thousands of second-rate coins, and sellers love to see their collections given a well-deserved spotlight.” said Julie Abrams. “We are just ecstatic with the results of the RanJack Collection! The action started off with a real bang, and the momentum continued through the rest of the RanJack Collection with 95% of the coins selling to collectors! After the dust settled, the RanJack Collection surpassed our pre-sale hammer expectations by nearly $100,000! Just take a look at these results”:

Silver dollars from other consignments continued after the RanJack Collection. The real star of was the record-shattering realization of Lot 95, the superb 1892-O PCGS MS66+ CAC that realized $79,313 after a heated round of bidding. Toned dollars, both Morgan and Peace issues, continued to bring strong prices, especially Lot 160, a 1927-S in PCGS MS65 CAC from the Liberty Sunrise Collection, brought $12,925.

The Balance of the Sale

“Early U.S. type coins, especially high-grade and premium-quality coins, always bring strong bidding from collectors. There are never enough to satisfy demand,” explained Greg Cohen, the senior numismatist for the firm. “When a small but powerful group comes out into the market, expect there to be strong prices. With every coin in the South Texas Collection PCGS/CAC, they attracted a lot of attention from bidders. It doesn’t hurt that every coin was hand selected by our founder, Laura Sperber, for their inclusion in the set.”

Following the South Texas coins was another select grouping of type coins from the Pharma Collection. Featuring some high-end 19th- and 20th-century types, all hand selected again for this collection by Laura Sperber, the quality was exceptional, and the prices reflect that.

The rest of the sale remained extremely strong. The Chester Roche Collection, an estate holding of gold coins put away 20-25 years ago, saw intense bidding, especially for PCGS-graded, CAC-approved specimens, a pattern that continued with the gold coins from other important consignments. Like Regency Auction 26, the sale closed with an extensive offering of patterns from the Stephen Cook Collection, that again saw intense bidding.

“Collectors really came out for the patterns,” Laura Sperber said. “We saw a record number of bidders for patterns come out for this selection, including a bidder who was ‘a blast from the past,’ someone we have not seen in some 20 years! Collectors are finally realizing what a great value they are at today’s levels. Like the dollars, 95% of the lots went right into collections! Who knows if they will ever come out again.”

Further highlights of Regency Auction 27 are:

“After our huge auction in May, we were blown away by the number of consignments that came in for the July Auction,” Laura Sperber continued. “We do not want to ever lose the boutique feel of our auctions, so we worked very hard vetting consignments. In the end we had to pass on close to 150 coins that just would not fit our auction, either in terms of value or quality. Having proven that Legend’s quality over quantity, boutique approach results is very strong prices for our consignors. Know that we will never stray from that. We set a very high bar.”

Legend Rare Coin Auctions’ next Regency Auction is going to be a two-day event on September 26 and 27 at the Cosmo in Las Vegas, as always as the official auctioneer for the PCGS Members Only Show. Two major collections have already been consigned to Regency Auction 28. Consignments are now being accepted for that important event, and will be accepted until the end of the 2018 ANA World’s Fair of Money, August 13-18. Whether you have a single rarity, a few duplicates, or an entire collection, Legend Rare Coin Auctions will present your coins to their finest advantage, resulting in the highest possible prices. For more information about consigning, contact one of the firm’s consignment specialists: Julie Abrams (845-430-4378 or julie@legendauctions.com); Greg Cohen (732-935-1168 or greg@legendauctions.com); or Jessica Berkman (214-909-7732 or jessica@legendauctions.com).